A scanned color version of Royal MS 1 D VIII, volume 4 – the New Testament – of Codex Alexandrinus, a 5th-century Greek Bible in four volumes, is available in the “Digitised Manuscripts” section of the British Library’s website.

The various owners’ inscriptions described on the webpage detail the fascinating journey of this codex from Constantinople to England through the hands of Athanasius III, Patriarch of Alexandria, to James I, King of England, Scotland and Ireland.

In the collection of the research library of St. Petersburg State University there is a parchment fragment from the Gospels dated to the 14th century. A. A. Savel’ev, the SPbSU local cataloger, describes the manuscript:

Text in two columns, initials and notes in cinnabar.

Contains a fragment from the Gospel according to Matthew: 5:25-6:23. Bulgarian recension (?).

On f. 1 is an owner’s inscription dated 1858 “бысть в руце агаряна и избависе”; on f. 2 in the same hand is an inscription that indicates the Gospel belonged to Holy Trinity Monastery. 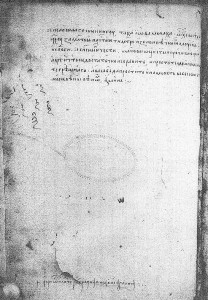 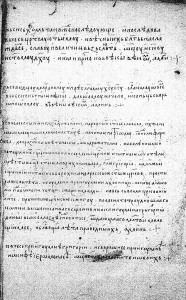 June 3, 2012 / johnson.60@osu.edu / Comments Off on Marginalia: Seven Stages of Intoxication

Different types of inscriptions are found in medieval manuscripts – Slavic and otherwise. The scribal colophon (the who-what-where-when and sometimes why or for whom) is usually located at the end of the manuscript in the hand of a scribe who copied the main text. It is often somehow set apart from the main text – perhaps physically on a separate page or written in smaller letters. It may be written in the scribe’s colloquial language, which also serves to distinguish it from the text. In the margins of manuscripts one may find glosses, corrections, rubrics, pen testings, communicative inscriptions (i.e., meaningful statements unrelated to the main text), penmanship exercises, and cryptograms.

Slavic manuscript No. 34 of St. Catherine’s Monastery, Mt. Sinai, is a 13th-century collection of patristic homilies, sayings, and lives of the holy fathers. There are pen testings, for example, on the inside back cover, and a Greek inscription on folia 42v-43r. On f. 36v is a later (communicative) inscription that describes the seven stages of intoxication:

Translation: “Digion says: When a man sits down at a feast, he drinks a cup to health, and a second to merriment, and a third to repletion, and fourth to madness, and a fifth to a demonic state, and a sixth to a bitter death, and a seventh to eternal torture that will not end.”