In one of the lesser known ironies of the Space Race, America’s expertise in the design of an intercontinental ballistic missile (ICBM) directly hampered NASA’s early efforts to place a man into orbit. The Soviet Union’s inability to manufacture small, but powerful, nuclear weapons led the Soviets to rely upon large booster rockets. These large rockets were capable of placing a heavy spacecraft into orbit. By contrast, the existing rocket designs available to NASA during Project Mercury were smaller in keeping with the lighter, more technically advanced U.S. nuclear arsenal.

Modifying the Atlas rocket into a spacecraft booster ran into many unforeseen engineering problems resulting in numerous, often spectacular, launch failures. Well publicized by the media, these failed tests gave the impression that America’s rockets always blew up during launch. Thus the headlines on the cover of the February 2, 1962 issue of Life Magazine.

Stamped as a classified document when it was written in December 1961 (since declassified), this listing chronicles the failed test launches of the Atlas D series booster rocket.
At the bottom of the listing is Atlas rocket 108D. John Glenn’s Friendship 7 spacecraft was launched into orbit on February 20, 1962 by Atlas rocket number 109D. 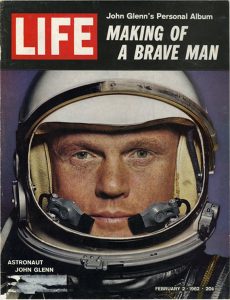 When asked about how he felt before the launch of his Friendship 7 space flight, when he became the first American to orbit Earth, John Glenn often jokes, “How would you feel sitting on top of a machine with a million parts all made by the lowest government bidder?” Fortunately for John Glenn and the early American space effort, his launch into orbit succeeded without flaw.

A model of an American ICBM on top of the Atlas rocket manufactured by the General Dynamics Corporation. NASA modified the Atlas rocket to boost Mercury missions into full orbit. The sub-orbital space flights made by Alan Shepard and Gus Grissom in 1961 used the smaller Redstone rocket booster. After launching Friendship 7 into space, the Atlas booster rocket 109D orbited for three days before falling back into Earth’s atmosphere. 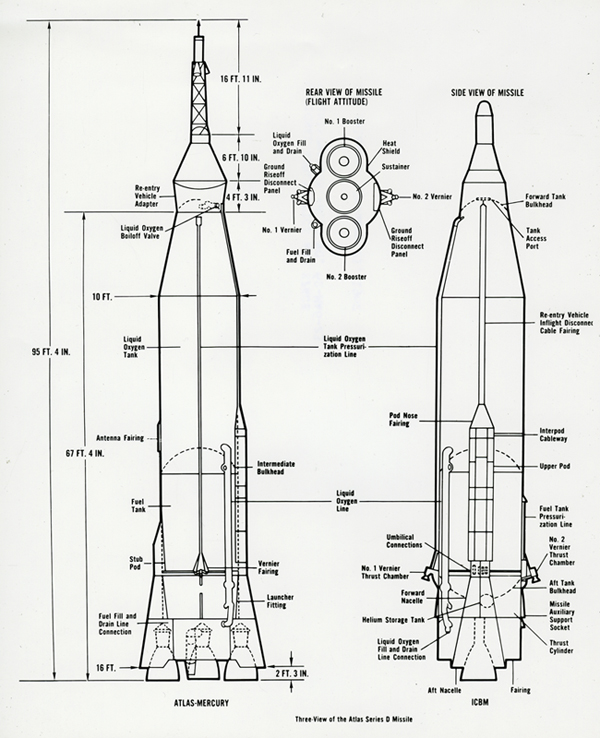