In July 1958, President Dwight Eisenhower signed legislation establishing the National Aeronautics and Space Administration (NASA), with the main objective of placing an American into space. Later that year, John Glenn became one of the 110 military test pilots, out of an initial pool of 508, to volunteer for selection into Project Mercury, NASA’s first manned space program. During the selection process a narrowed down list of 32 candidates underwent extensive medical examinations at the Lovelace Clinic in Albuquerque, New Mexico, followed by equally intense physical and psychological testing at Wright-Patterson Air Force Base near Dayton, Ohio. Using the results of these tests, along with other factors such as education and combat experience, NASA picked seven individuals as its first class of astronauts.

Following their selection into the NASA space program the seven Mercury astronauts began a full schedule of training and academic study designed to prepare them for what scientists could then only speculate would be the conditions encountered in outer space. Other training familiarized the astronauts with their spacecraft and the detailed procedures used for launching into orbit and then returning safely back to Earth.

From the beginning the seven astronauts became keenly involved in Project Mercury, especially in the design of the spacecraft. They insisted the spacecraft be equipped with a window rather than just a retractable telescope. As test pilots, they believed strongly in having the means to actively control their spacecraft, rather than simply be passengers in an automated system, so engineers installed a manual back-up control system. NASA assigned each astronaut to assist in some aspect of spacecraft design or to helping create various mission procedures. In his first two years with the program, when he was not undergoing training, John Glenn worked with the team of engineers developing the instrument control panel for the Mercury spacecraft.

Each of the seven astronauts, being competitive by nature, vied to become the first American launched into space. To John Glenn’s disappointment, early in 1961, NASA officials chose Alan Shepard to pilot the first space flight, followed by Gus Grissom and then Glenn. However, Glenn’s third place position proved fortuitous when NASA, buoyed by the success of the sub-orbital flights of Shepard and Grissom, decided to make Glenn’s mission the first attempt at full orbital space flight.

Below are a number of preserved documents, as well photographs taken during the project:

A six page letter written by John Glenn to his family describing the medical tests the astronaut candidates underwent at the Lovelace Clinic.

A memorandum listing John Glenn’s schedule for the tests performed at Wright-Patterson Air Force Base.

The first of eighteen pages of notes and random thoughts John Glenn wrote in the dark to pass the time.

This photo was taken at NASA’s April 9, 1959 press conference introducing the Project Mercury astronauts. The photograph records the astronauts’ response to the question of who wanted to be the first one launched into space. 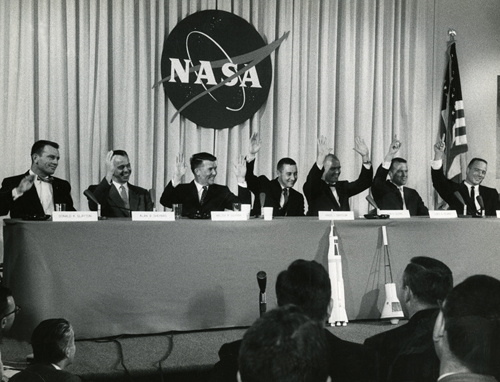