On February 20, 1962, John Glenn became the first American astronaut to orbit Earth. During a mission lasting just under five hours, his Friendship 7 spacecraft orbited three times and splashed down without incident near the Bahama Islands. To commemorate the 50th anniversary of John Glenn’s achievement the Ohio State University Libraries hosted an exhibit about the historic spaceflight using manuscripts, photographs and artifacts from the John Glenn Archives. Displayed in the Thompson Library, the exhibit ran from February 1 to April 30, 2012. This online exhibit uses the same materials from the John Glenn Archives to replicate as closely as possible the original cases in the physical exhibit. 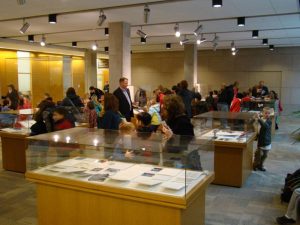 A class of schoolchildren explore the
Friendship 7 exhibit on March 1, 2012.