At two o’clock in the morning of February 20, 1962, John Glenn ate a breakfast of steak, eggs, toast, and orange juice, the start of a strictly planned procedure designed to prepare him as the astronaut aboard NASA’s Mercury-Atlas Mission 6. After a pre-flight medical examination conducted by Dr. William K. Douglas, NASA technician Joe Schmitt helped Glenn get into his space suit. The three of them then left the crew quarters of Hanger S in Cape Canaveral, Florida, where Glenn had been living for the past two months, for the van that would transport Glenn to his Friendship 7 spacecraft sitting on top of its Atlas booster rocket on the Cape’s launch complex 14. Upon arrival at pad 14, technicians assisted Glenn into the small capsule where he settled into the custom-fitted couch to await launch, lying on his back in a sitting position within the capsule’s cramped interior.

By now these pre-launch procedures had almost become routine for John Glenn, as this was the eleventh attempt to launch his space mission. The many delays and postponements served to heighten public expectations and suspense as the American manned space program strived to match the Soviet Union’s achievements in space. On April 12, 1961, cosmonaut Yuri Gagarin became the first person to orbit Earth. Gagarin’s single-orbit mission was followed closely in August 1961 by the record flight of cosmonaut Gherman Titov, who during a twenty-four mission made a total of seventeen orbits around the globe. In May and July 1961, NASA successfully launched Alan Shepard in his Freedom 7 spacecraft and Gus Grissom in Liberty Bell 7 into sub-orbital flights each lasting about fifteen minutes. Glenn’s mission would be NASA’s first attempt at full orbital space flight.

Once again, cloud cover over Cape Canaveral initially delayed the launch. Then a broken microphone bracket in John Glenn’s helmet and a sheared bolt on the capsule’s hatch further interrupted the launch countdown. Finally, at 9:47 in the morning, Glenn successfully launched into orbit to astronaut Scott Carpenter’s parting message of “Godspeed John Glenn.”

Astronaut John Glenn looks exhausted from spending almost six hours lying on his back in the Friendship 7 spacecraft during an attempt to launch his orbital space mission on January 27, 1962. NASA cancelled the attempt due to weather conditions. Mechanical problems or unfavorable weather postponed Glenn’s mission ten times before he successfully launched into orbit on February 20, 1962. 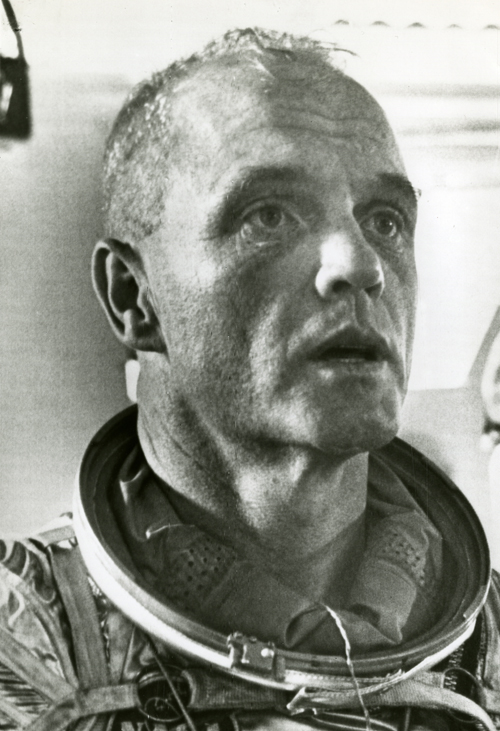