In the two weeks following John Glenn’s Friendship 7 space flight, the United States celebrated on a scale not seen since Charles Lindbergh’s solo trans-Atlantic flight in 1927. On February 23, 1962, Vice President Lyndon B. Johnson flew to Grand Turk Island to escort Glenn on a flight to Patrick Air Force Base in Florida, where Glenn was reunited with his family. The Glenn family, accompanied by the vice president and the Mercury astronauts, then proceeded by automobile to Cape Canaveral where they were scheduled to meet with President John F. Kennedy. The eighteen-mile trip turned into a parade as thousands of people stood along the highway to greet the returned astronaut. Later that day, during ceremonies held at Cape Canaveral, President Kennedy presented Glenn with NASA’s Distinguished Service Medal.

By invitation of President Kennedy, on February 26th the Mercury astronauts and their families met with the president and vice president at a White House reception. After the event, John and Annie Glenn, riding in an open car with Vice President Johnson, led a parade down Pennsylvania Avenue to the U.S. Capitol. Despite dismal rainy weather thousands of people lined the route. Upon arrival at the Capitol Building, Glenn had the rare honor of giving a speech to a special joint session of Congress.

New York City vividly illustrated the public enthusiasm over the success of the Friendship 7 space flight when the Mercury astronauts arrived there on March 1st. An estimated four million people turned out in frigid temperatures to cheer as John and Annie Glenn, again in an open automobile with Vice President Johnson, rode in a procession down Broadway, temporarily named “Astronaut Way” for the event. New Yorkers showered thirty-five hundred tons of paper along the route in the biggest tickertape parade in the city’s history. After a round of speeches at City Hall, the motorcade proceeded to the Waldorf-Astoria Hotel where Glenn received the city’s Medal of Honor at a luncheon held in honor of the Mercury astronauts. The following day the astronauts visited the United Nations, where Glenn gave a brief address. He stressed, as he had in all his speeches following the space flight, the team effort required to place a man in orbit and the importance of the space program to the nation. (Click here to read Glenn’s first draft of his speech to Congress, written while vacationing with his family in Key West, Florida.)

On the next day, March 3rd, John and Annie Glenn returned to their hometown of New Concord, Ohio for their fourth parade in ten days. On another cold and blustery day 75,000 people converged on the small town of 2,100 residents in east central Ohio to get a glimpse of the local hero. After the parade Glenn gave a speech to a packed gymnasium during ceremonies held at Muskingum College. As part of the ceremonies the college, John and Annie Glenn’s alma mater, named the gymnasium for its famous alumnus. 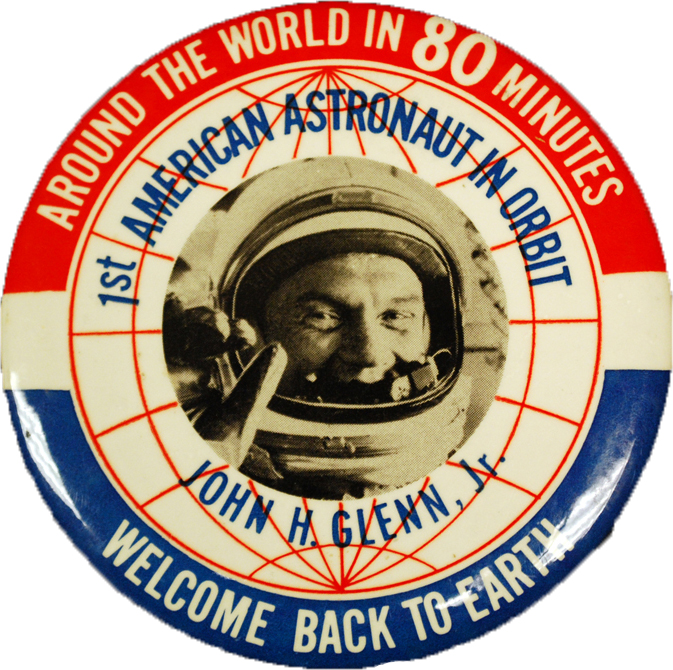