The success of the Friendship 7 space flight sent the United States into a patriotic fervor and made the mission’s astronaut an instant hero. John Glenn’s name was on the front page of newspapers across the country and around the globe.

After the flight Glenn received hundreds of thousands of pieces of mail from people living in every state in the union and one hundred foreign countries, including the Soviet Union. In thousands of elementary classrooms in America schoolchildren wrote letters about and drew pictures of the event. Many classes bound their efforts together into an album sent to Glenn with a cover letter from the teacher stating what an inspiration he was to the children.

Glenn received hundreds of invitations for public appearances at events ranging from local Boy Scout meetings to meetings of prestigious scientific organizations. Various political entities, from small local municipalities up to the U.S. Congress, passed resolutions and proclamations congratulating Glenn on his achievement. Hundreds of people sent him the poem or song they wrote to commemorate the space flight (click here to listen to “Mighty John Glenn“, sung by Peter Columbo), while across the country, school buildings, streets, and newborns were named after Glenn.

Public recognition of the feat he achieved on February 20, 1962 has followed John Glenn all of his life. One result of his space flight was the friendship Glenn formed with both President John F. Kennedy and his brother, Robert. The two Kennedy brothers recognized the political potential of Glenn’s popularity. With their support Glenn resigned from his position with NASA, submitted his retirement from the U.S. Marine Corps, and ran for the U.S. Senate in the 1964 Ohio Democratic primary. Unfortunately, Glenn’s first political campaign ended abruptly when a head injury sustained in an accidental fall forced him to drop out of the race. Another bid for a senate seat in 1970 ended in defeat during the primary election, but in 1974 Glenn ran again, this time winning both the primary and general election. He went on to serve for 24 years in the U.S. Senate, a feat unmatched by any other Ohioan.

Prior to leaving NASA for the political arena in 1964, Glenn had lobbied hard with NASA officials to return to space as part of the two-man or three-man crews of the Gemini and Apollo programs, but was denied all requests. Unknown to Glenn at the time, President Kennedy had judged him to be too valuable a national asset to risk in another space flight. It would be 36 years after the flight of Friendship 7 until NASA finally granted John Glenn his request to return to space. On October 29, 1998, Glenn again launched into space, this time for a nine-day mission as a crew member aboard Space Shuttle Discovery mission STS-95. At age 77, he set another record by becoming the oldest person ever to journey into outer space.

Child's drawing | Here is a drawing of the Glenn family watching the launch by a 3rd grader in Ohio. A substantial percentage of the letters John Glenn received after his Friendship 7 space flight came from schoolchildren living all across the United States and around the world. 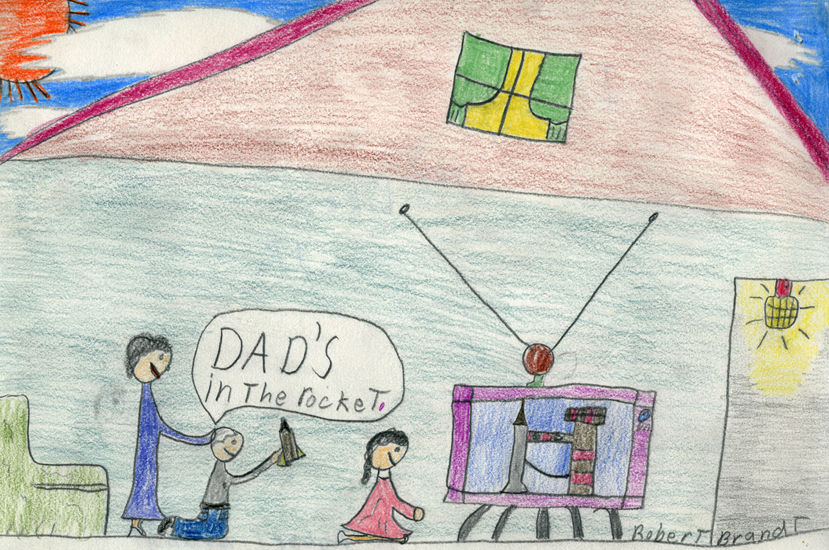