After his successful launch at 9:47 in the morning on February 20, 1962, John Glenn became the first American to orbit Earth. Over the course of the next four hours and fifty-six minutes Glenn, flying between 160 and 256 kilometers above the Earth’s surface at a rate of more than 28,000 kilometers per hour, orbited Earth three times and splashed down without incident into the Atlantic Ocean near the Bahamas.

Although an overall success, John Glenn’s time in space was not without incident and a fair amount of suspense. Toward the end of the first orbit the spacecraft’s automatic control system malfunctioned throwing the capsule’s yaw attitude some 20 degrees to the right. Glenn spent much of the remaining two orbits on manual control as he tried repeatedly to reset the gyros of the automatic control system. Toward the end of the flight a warning light, which subsequently turned out to be a false reading, indicated the heat shield on Friendship 7 was loose. This warning caused some nervous moments for NASA ground controllers since a damaged heat shield could result in the disintegration of the spacecraft and its pilot during the 3,000-degree F heat of reentry. To cope with the perceived problem technicians decided to keep the retro-rocket pack attached to the heat shield to help secure it. The normal procedure called for jettisoning the pack after the rockets fired to slow the spacecraft for reentry. The result was what Glenn called “a real fireball” as the pack burned away during his reentry through the atmosphere.

Twenty minutes after splashdown the Friendship 7 spacecraft, with John Glenn still inside, was hoisted aboard the Navy destroyer U.S.S. Noa. Glenn spent some time on the destroyer for initial debriefing before transferring by helicopter to the aircraft carrier U.S.S. Randolph. The next day he flew to Grand Turk Island for two days of detailed debriefings and medical tests.

Gallery pages 13, 14, and 15 a sequence of events in the recovery of the Friendship 7 spacecraft by the Navy destroyer U.S.S. Noa after the capsule splashed down safely in the Atlantic Ocean near the Bahamas.

Photograph of the orbital chart in the Mercury Control Room at Cape Canaveral, Florida during John Glenn's MA-6 orbital space flight, February 20, 1962. The paths of the mission’s three planned orbits are indicated on the wall map in the photograph. The circles on the maps designate the range of the fourteen tracking stations positioned around the globe to keep in radio contact with the spacecraft. 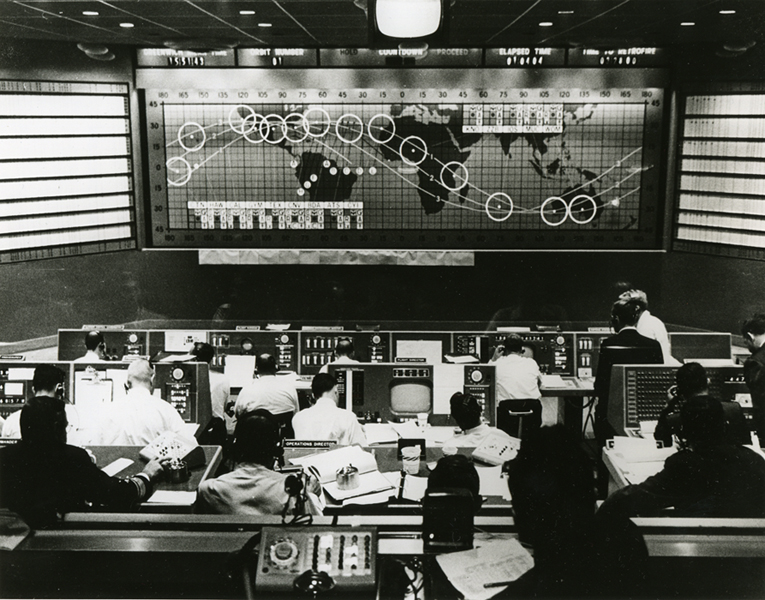