Owens and The Ohio State University 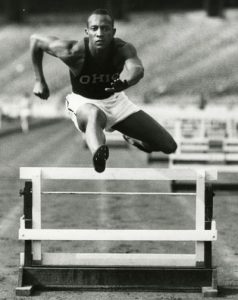 Owens’ achievements on the track in high school were so phenomenal that he caught the attention of several Big Ten universities, including The Ohio State University and the University of Michigan. It came down to which school had the best offer, and in the end, OSU’s proposal that Owens could work part-time as a freight elevator operator at the State House while training and going to classes was the winning one. After passing a series of exams that summer to qualify him to enter college (he was a few credits shy of graduating from high school), Owens started classes at OSU in the fall of 1933.

At the time of Owens’ matriculation, The Ohio State University had only one men’s dorm, and Owens was barred from it because of his race. He instead shared a boarding house with several other African-American students on East 11th Avenue, where they cooked their own meals and sometimes ate in the student union. No restaurant along High Street would serve them, nor were they allowed to go to most movie theaters. Owens, though, made the best of the situation, focusing on his studies and training with the OSU track team under coach Larry Snyder. 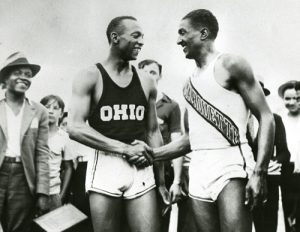 Snyder, who thought Owens’ race starts were too slow, made the athlete repeatedly practice starts that had him crouching tightly at the starting line. He also altered Owens’ long-jump style, teaching him to move his legs in mid-air. By May 1935, Owens was showing the nation a glimmer of what was to come at the 1936 Olympic Summer Games: That month, at the Big Ten Finals in Ann Arbor, he set world records in the 220-yard dash, the 220-yard low hurdles and the long jump.

While Owens was logging many victories on the track – he was even chosen team captain, the first African American elected to that position on a Big Ten team – he had few such highlights in the classroom. His grades were so poor his junior year that the University made him academically ineligible to compete in any winter indoor meets in 1936. He had brought his grades up sufficiently by spring quarter to compete in the regular outdoor season, but that was the last full academic year Owens spent at Ohio State. After doing so well in the 1936 Summer Games, he decided to take advantage of the financial opportunities his fame offered. He did go back to OSU the fall of 1940, but he once again was placed on academic probation. In December 1941 he withdrew from OSU and never finished his degree. Thirty-two years later, however, the University awarded him an honorary doctorate of athletic arts “for his unparalleled skill and ability” as an athlete and for “his personification of sportsmanship ideals.”