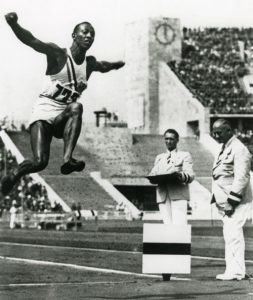 After the end of the spring quarter at Ohio State, Owens traveled to the Olympic tryout finals in New York, where he won all three of his events. He and the 381 members of the U.S. Olympic Team then boarded the SS Manhattan on July 15 for its voyage to Europe. Along the way, Owens, who had been getting a significant amount of press for his track achievements, signed hundreds of autographs for fellow shipmates. After nine days of rough seas and stormy weather, the ship docked at the German port of Bremerhaven; the athletes were in Berlin enjoying the opening ceremonies barely a week later on August 1st.

Participating as a sprinter at the Olympic Summer Games of 1936 was a far different experience than it is today. There were no starting blocks, their shoes were made of heavy leather, and instead of running on a contemporary turf track, they sped down a course composed of cinder, which became uneven and messy when it rained. It was, in fact, raining intermittently during the first week of Olympiad XI, yet Owens won four Olympic gold medals. Along the way, he tied the world record of 10.3 seconds in the 100-meter dash; set new Olympic records of 20.7 seconds in the 200-meter race, and 26 feet, 5 1/4 inches in the long jump; and he ran the first leg in the finals of the 400-meter relay, an event in which his team set a new world and Olympic record of 39.8 seconds.

His triumphs before a worldwide audience were serendipitous; Germany’s leader, Adolf Hitler, who had been widely condemned before the Games for his anti-Semitic policies, openly anticipated a great showing of Aryan athletic supremacy. With his victories in track and field, Owens had proved the Nazi dictator’s racist theories wrong, and in doing so, had become not only an Olympic gold medal winner but an American hero.