From Buckeye to National Hero 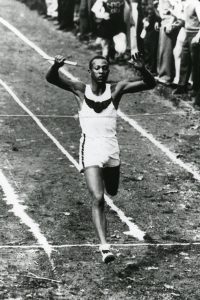 More than 75 years  after he raced at the 1936 Berlin Olympics, Jesse Owens is still seen as a national hero, having become the first person ever to win four gold medals at one time in Olympic track history. With his victories at the 1936 Berlin Summer Games, his fame was quickly established. These feats soon became legendary, however, because they were accomplished in front of Germany’s Nazi dictator, Adolf Hitler, who was loudly proclaiming to the world the superiority of the Aryan race. Almost overnight, Owens, an African American who had grown up in Cleveland, Ohio and studied at The Ohio State University, became an international celebrity for putting a chink in Hitler’s propaganda machine. Owens was only 22 when he became an Olympic hero, and he never again competed as an amateur athlete. He spent the rest of his life in a variety of ways: running several businesses, raising a family, promoting the Olympics, and volunteering his time as an advocate for children. Still, he always will be remembered for his celebrated triumphs – both on and off the track – at the 1936 Olympic Games.