Following his death in 1902, Thomas Nast’s obituary in Harper’s Weekly stated, “He has been called, perhaps not with accuracy, but with substantial justice, the Father of American Caricature.” Nast’s campaign against New York City’s political boss William Magear Tweed is legendary. He devised the Tammany tiger; popularized the donkey as the symbol for the Democratic Party and elephant, for the Republican Party; and created the “modern” image of Santa Claus. One of Nast’s cartoons was said to have re-elected Lincoln in 1864, and Lincoln himself commented that Nast was his best recruiting sergeant. Grant attributed his election as President in 1868 “to the sword of [General Phil] Sheridan and the pencil of Nast.”

Thomas Nast was born in Landau, Germany, on September 26, 1840. His father Thomas, a trombonist in a regimental band, held liberal political sentiments. The elder Nast found Germany’s political climate uncomfortable. In 1846 he sent his wife, Appolinia Abriss, and their small son and daughter to New York City, and he joined them in 1849 when his enlistment was up. The younger Nast studied art with Theodore Kaufmann in 1854. The next year he worked at the Thomas Jefferson Bryant Gallery of “Christian art,” where he also copied the historical paintings in Bryant’s collection. At the age of fifteen, he was hired as a reportorial artist for Frank Leslie’s Illustrated Newspaper. In 1859 he moved to the New York Illustrated News; and was sent by the paper to England in February 1860 to cover a major prizefight. After the match Nast went to Sicily to report on Giuseppe Garibaldi’s military campaign in Sicily. He returned to the United States in early 1861, and that fall he married Sarah (Sallie) Edwards. They had five children, Julia, Thomas, Jr., Edith, Mabel, and Cyril.

By the summer of 1862 Nast’s freelance work had evolved into a position with Harper’s Weekly. In August he visited battlefields and sent reportorial sketches back to the magazine. His drawings were transformed by engravers into wood engravings that were often printed as double-page spreads about twenty inches wide. When Nast was in the office, he drew backwards directly on the boxwood printing blocks with a soft pencil. His heavy use of cross-hatching provided tonality for the black and white drawings. One critic has noted that Nast was the first cartoonist to have the advantage of weekly publication in a magazine with national circulation.

Thomas Nast was a Radical Republican, a liberal, progressive, nationalistic, and Protestant wing of the party. Nast was a fierce supporter for the Union cause who skillfully used allegory and melodrama in his art to support the cause he believed was just “Compromise with the South,” published in Harper’s Weekly on September 3, 1864, shows Columbia weeping at the grave of “Union Heroes in a Useless War” as a weary Union amputee shakes the hand of a neatly groomed Southern soldier. The image is said to have brought Nast “instant fame” and was reprinted widely by the Republicans in their effort to have Lincoln re-elected.

After the war ended, Nast was so well known that he was very active as a book illustrator in addition to his work at Harper’s Weekly. Over the course of his career, he illustrated more than one hundred ten books. In 1867 Nast executed thirty-three huge (eight feet by twelve feet) tempra paintings that comprised an allegory of the nation’s recent history. The enormous pictures were rolled across a stage, accompanied by piano music and a satirical narrative presented by an actor. Nast’s Grand Caricaturama was a critical success but a financial failure.

In 1868 Thomas Nast turned his attention to the corrupt New York City administration of Tammany Hall Democrats led by William Magear “Boss” Tweed. For the next three years Harper’s Weekly and the New York Times campaigned against him. Nast’s cartoons were so effective in depicting Tweed as a sleazy criminal that legend has it that the Boss dispatched his minions with the command, “Stop them damn pictures. I don’t care what the papers write about me. My constituents can’t read. But, damn it, they can see the pictures.” An irony of history is that when Tweed escaped from jail and fled to Spain in 1876, he was recognized and arrested by a customs official who did not read English but had seen Nast’s Harper’s Weeklycaricatures of Tweed.

During the Presidential campaign of 1872 Nast savaged the candidacy of Horace Greeley. In 1873 he undertook a lucrative cross-country lecture tour billed as “The Prince of Caricaturists” and the “Destroyer of Tammany Hall.” Nast’s work during Grant’s terms in office lacked the fire of his earlier work because he supported the administration. Richard Samuel West notes, “Nast was a dogmatist, content to view the world as a struggle between good and evil. Consequently, his work was caustic and lecturing. The harshness of his heavy black line and the severity of his crosshatching mirrored his angry politics.”

Several circumstances caused a rapid decline in Nast’s notoriety and fortunes. One was the transformation of American society after the Civil War. Party politics shifted and both Democrats and Republicans had scallywags in their ranks. Immigrants and women became more literate and their purchasing power grew. An increase of leisure time made magazine readers seek entertainment and amusement in addition to information about current events.

Secondly, the management at Harper’s Weekly changed. Nast enjoyed great editorial freedom with Fletcher Harper, the magazine’s founder and publisher, and after his death in 1877, that ended. Joseph W. Harper, Jr., the new publisher, supported editor George Curtis as he moved the magazine away from an emphasis on politics toward topics of more general appeal Harper’s Weekly also faced competition from Puck with its beautiful color cartoons by Joseph Keppler. West observes that Nast was “the first journalist to make an issue of professional integrity.” He refused to draw cartoons he did not believe in and Curtis did not want to publish cartoons that contradicted Harper’s Weekly editorial positions.

The final circumstance affecting Nast was a change in how cartoons were printed. Morton Keller notes, “Nast’s art . . . underwent a sea change in this time of political transformation. Photochemical reproduction replaced engraved woodblocks around 1880. Thereafter he drew with a pen not a pencil, and on paper instead of a wooden block. The result was a harder, sparser line to his drawings, unsparing of deficiencies of technique that had been obscured by the softer medium of block engraving. The change only underscored the fact that Nast had less and less to say; that his artistic force and imagination had declined in step with his political commitment and interest.”

Thomas Nast left Harper’s Weekly in late 1886. He freelanced for a variety of magazines and in September 1892 he established Nast’s Weekly, which lasted less than six months. He tried unsuccessfully to return to his first ambition, historical painting. By 1902 he was desperate for work and accepted 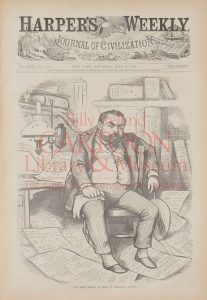 President Theodore Roosevelt’s appointment to serve as consul general to Ecuador. After only six months abroad, he died there of yellow fever on December 7, 1902.

In an article titled “Nast, Gladiator of the Political Pencil,” William Murrell states, “Nast is often spoken of as the first great American cartoonist. In a very real sense he was the last. For while it is true that many of his symbols and devices have become part of the cartoonist’s stock in trade . . . his attitude was a complete flowering of the older tradition–a tradition of ruthless, two-fisted attack.” After Nast’s death Harper’s Weekly noted that he belonged “. . . so much to the past that the impression has naturally spread that he was an old man.” Nast was, in fact, only sixty-two when he died, a giant in the history of American cartooning who found himself out of step with changing times.