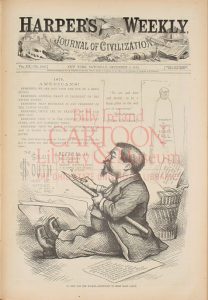 Thomas Nast was a celebrity. In 1873, following his successful campaign against New York City’s Tweed Ring, he was billed as “The Prince of Caricaturists” for a lecture tour that lasted seven months. Nast used his Harper’s Weekly cartoons to crusade against New York City’s political boss William Magear Tweed, and he devised the Tammany tiger for this crusade. He popularized the elephant to symbolize the Republican Party and the donkey as the symbol for the Democratic Party, and created the “modern” image of Santa Claus. Following his death on December 7, 1902, Thomas Nast’s obituary in Harper’s Weekly stated, “He has been called, perhaps not with accuracy, but with substantial justice, the Father of American Caricature.”

Celebrating Thomas Nast’s Contributions to American History and Culture was held at The Ohio State University December 7, 2002, to mark the centennial of Nast’s death. Cosponsored by the Billy Ireland Cartoon Library & Museum, the Mark J. Cohen and Rose Marie McDaniel Endowment, Department of History, School of Journalism and Communication, and Friends of the Libraries, with additional support from the Ohio Humanities Council, a state affiliate of the National Endowment for the Humanities. Morton Keller, Spector Professor of History (Emeritus) at Brandeis University, presented “The World of Thomas Nast.” at the symposium.