“Compromise with the South” Harper’s Weekly 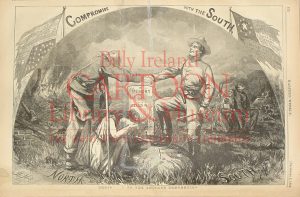 Nast powerfully combats the defeatism that pervaded the Union during the summer of 1864, when Lincoln himself expected to be defeated for reelection. A tattered American flag hangs upside down in a signal of distress because northern cities are devastated. Columbia, symbolizing the nation, weeps as a disabled Union veteran’s handshake with a Confederate officer dissolves into an abject surrender. The triumphant Confederate’s foot treads on a Union soldier’s grave and breaks the northern sword and northern power. In the South, its flag resplendent in victory despite the crimes listed in its folds. An African American Union veteran and his family are reshackled in slavery. The title of the work refers to the recent Democratic presidential nominating convention, which had promulgated a platform pronouncing the war a failure, criticized emancipation, and advocated a cease-fire and negotiations with the Confederacy. This cartoon was widely reproduced by the Republican Party for use in President Lincoln’s campaign.