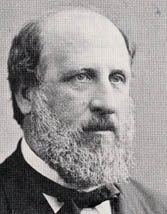 William Magear Tweed (1823-1878), more commonly known in American history as “Boss Tweed,” was an object of scathing criticism by Thomas Nast. Tweed was a New York City politician who led a group of corrupt politicians who gained power in the Democratic party in 1863, when Tweed was elected “Grand Sachem” of Tammany Hall. Originally a fraternal organization formed in 1786, the Society of Tammany grew more political in the nineteenth century and its building became the site where the Democratic party activists often met. Although he held minor elective offices, Tweed primarily exercised power through his control of patronage, the ability to appoint supporters to jobs in New York City government. For instance, after he was appointed commissioner of public works, Tweed enlarged the street maintenance crew to include twelve jobs as “manure inspectors.”
Not only did Tweed maintain and increase his power by rewarding his supporters, he also profited personally from business conducted by the city of New York. For a company to receive business contracts with the city, it had to inflate its prices and kick back a portion of its income to Tweed and his closest associates in local government. This coterie of corrupt politicians enriching themselves at the public’s expense was known at the time as the Tweed Ring.
The Tweed Ring was successful in part because it was popular among many voters, especially the Irish immigrants who had flooded the city in search of a better livelihood. Tweed and his friends ensured that Irish-American supporters received jobs and other assistance from the city government and from companies doing business with the city. 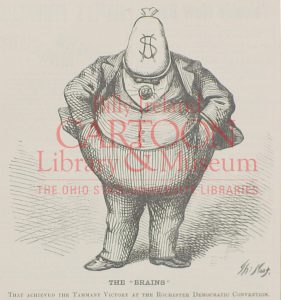 For Nast, Tweed personified two great evils afflicting American society after the Civil War: corruption and greed, on the one hand, and the influence of Irish immigrants on the other Harper’s Weekly and the New York Times crusaded against corruption in city government in 1870 and 1871. Nast used his talents in a campaign to undermine Tweed and rally good government forces to overthrow the boss. Cartoon after cartoon pictured Tweed as a thief. In addition to his caricatures of Tweed, Nast created the Tammany Tiger as a symbol for the Ring, and sometimes he used it as a more general symbol for the Democratic Party.
Nast succeeded in creating a negative image of Boss Tweed but was less successful in turning him out of power. Eventually, rivals in the Democratic Party, who sought the spoils of office for themselves, turned on Tweed. They provided evidence of his corruption to local newspapers, which eventually gave prosecutors the proof needed to convict Tweed. Businesses hoping to recover money extorted by the Tweed Ring also sued the fallen boss. He eventually fled the country, but was captured and returned. Tweed died in prison.