Gustave Verbeck (Gustave Verbeek) was born in Nagasaki, Japan to Dutch parents. He studied art in Paris, and contributed cartoons and illustrations to European newspapers. In the late 1890s he immigrated to the United States, where immigration officials changed his name to Verbeek. He freelanced at magazines such as Harper’s and the Saturday Evening Post, and was eventually hired by the New York Herald. After many years at the Herald, he quit to pursue his interests in engraving and painting. His best-known comic The Terrors of the Tiny Tads, showcases his highly personal imaginative vocabulary. Many of the images are, paradoxically, both playful and disturbing.

"When you get up higher and sit down," said Tom, "what do you sit on?" Illustration for John Kendrick Bangs' "Andiron Tales" - February 13, 1902 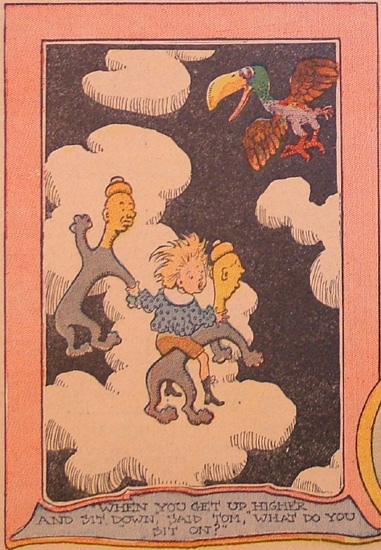