An informal poll of cartoonists taken in the early 1930s named Frederick Burr Opper the funniest man who ever worked for the American press. After more than two decades as a magazine cartoonist, Opper created newspaper comic strip characters with enormous popular appeal. His prototypical characters in magazine gag cartoons and covers, political cartoons, and comic strips amused readers for fifty-eight years. “From beginning to end, Opper thinks in terms of such abstract social forces,”?according to Alan Gowans. Successive generations of cartoonists followed his lead and populated their work with characters that embodied human qualities understood and shared by readers. Opper’s work was further strengthened by his uncluttered artistic style and keen sense of timing and its role in humor.

Frederick Burr Opper was born in Madison, Ohio, on January 2, 1857, the oldest of Lewis and Aurelia Burr Oppers’ three children. Lewis Opper, described as being in the “mercantile business,” was an Austrian immigrant. Frederick attended public schools, but dropped out when he was fourteen to work for the local newspaper, the Madison Gazette. At the age of sixteen he moved to New York City where he worked in a store during the day and made amusing drawings in the evenings. Opper’s only formal art training was one term at Cooper Union followed by a few months as a pupil and assistant to illustrator Frank Beard. He was ambitious to be an artist, so he sent samples to the leading humor magazines of the time.

Opper’s first published cartoon appeared in Wild Oats in 1876, followed by cartoons and illustrations in Scribner’s and St. Nicholas. In 1877 he joined the staff of magazine publisher Frank Leslie. Following Leslie’s death in early 1880, the publishers of Puck, Joseph Keppler and Adolph Schwarzmann, were able to hire the twenty-three-year-old for their magazine. Opper remained on the staff of Puck for eighteen years, drawing everything from spot illustrations to chromolithograph covers. Opper married Nellie Barnett in May 18,1881, and they had two children, Lawrence and Sophia.

Richard Samuel West notes that when Opper joined Joseph Keppler as a Puck artist, Keppler did not have to teach Opper anything about humor, but that he did help the younger man to refine his drawing technique. “Instead of compromising his [Opper’s] wonderful natural sense of visual humor, his increasing skill accentuated it. By drawing his funny ideas as precisely as possible, he achieved near-perfect humorous expression,” according to West. At the age of forty-two, Opper made a major career shift. William Randolph Hearst offered him a position with the New York Journal and Opper accepted. Happy Hooligan first appeared on March 11, 1900, and the comic strip ran until August 14, 1932. Hooligan was a tramp with a little tin can hat whose gentle simplicity and bumbling good nature made him a national hero.

Opper had two on-going series of single-frame political cartoons related to the presidential campaign of 1900: Willie and Teddy was about William McKinley and Theodore Roosevelt while Willie and his Papa satirized McKinley and “Papa Trusts,” with Cleveland industrialist Mark Hanna ridiculously depicted as “Nursie.” Because these trust-busting cartoons appeared daily in Hearst papers around the country, their impact was cumulative. William Murrell stated that the series was effective “…because of the sustained ridicule heaped upon Willie (McKinley), Teddy (Roosevelt) and Nursie (Mark Hannah). Poppa [sic] Trusts loomed bigger and more ominous despite his amiability because he was the titular (and to many people the actual) head of this not too harmonious family.” Murrell continues by observing that Opper’s drawing was “…outstanding not only in America but, I venture to say, in all graphic humor . . . his comic line is one of the greatest of all time.”

For the campaign of 1900 Opper also created an alphabet from A to Z of fat smiling trusts who kick, beat, and otherwise mistreat Mr. Common Man, a bewildered bald man whose hat is too small. Hess and Kaplan describe Opper’s little man as the origin of John Q. Public, the popular twentieth century symbol for ordinary people that Vaughn Shoemaker popularized about thirty years later. In the Twenties Opper created Alice in Plunderland, another political cartoon series that was a spoof of Alice in Wonderland, with Mr. Common Man witnessing the weird and peculiar goings-on of international politics following World War I.

The variety and number of features Opper created while working for Hearst is enormous. Alphonse and Gaston, a comic strip about two Frenchmen whose title entered the language as a euphemism for exaggerated politeness, ran from November 24, 1901 to June 17, 1904. And Her Name Was Maud, about the antics of a mule, began June 24, 1904 and ended October 13, 1907. It later ran as a topper to Happy Hooligan Sunday pages from May 23, 1926 until that comic strip ceased in 1932. Another of Opper’s comic strips was Howsan Lott, an early satire on suburbia, that ran from April 25, 1909 to September 27, 1914. Opper also illustrated books for Bill Nye, Mark Twain, and Finley Peter Dunne as well as publishing a number of books of his own work. He was a member of several New York clubs and he painted as a hobby. Failing eyesight forced his retirement from cartooning in 1934. He died at his home in New Rochelle, New York, on August 27, 1937.

Richard F. Outcault commented, “The kind of humor Opper gets into his drawings tickles a certain joint in my risibility that forces a good honest laugh. Some comics create in us a gratifying smile on our insides; some please us on account of their ingenuity and good draftsmanship, but Opper’s method of expression is purely an appeal to our sense of the ridiculous.” 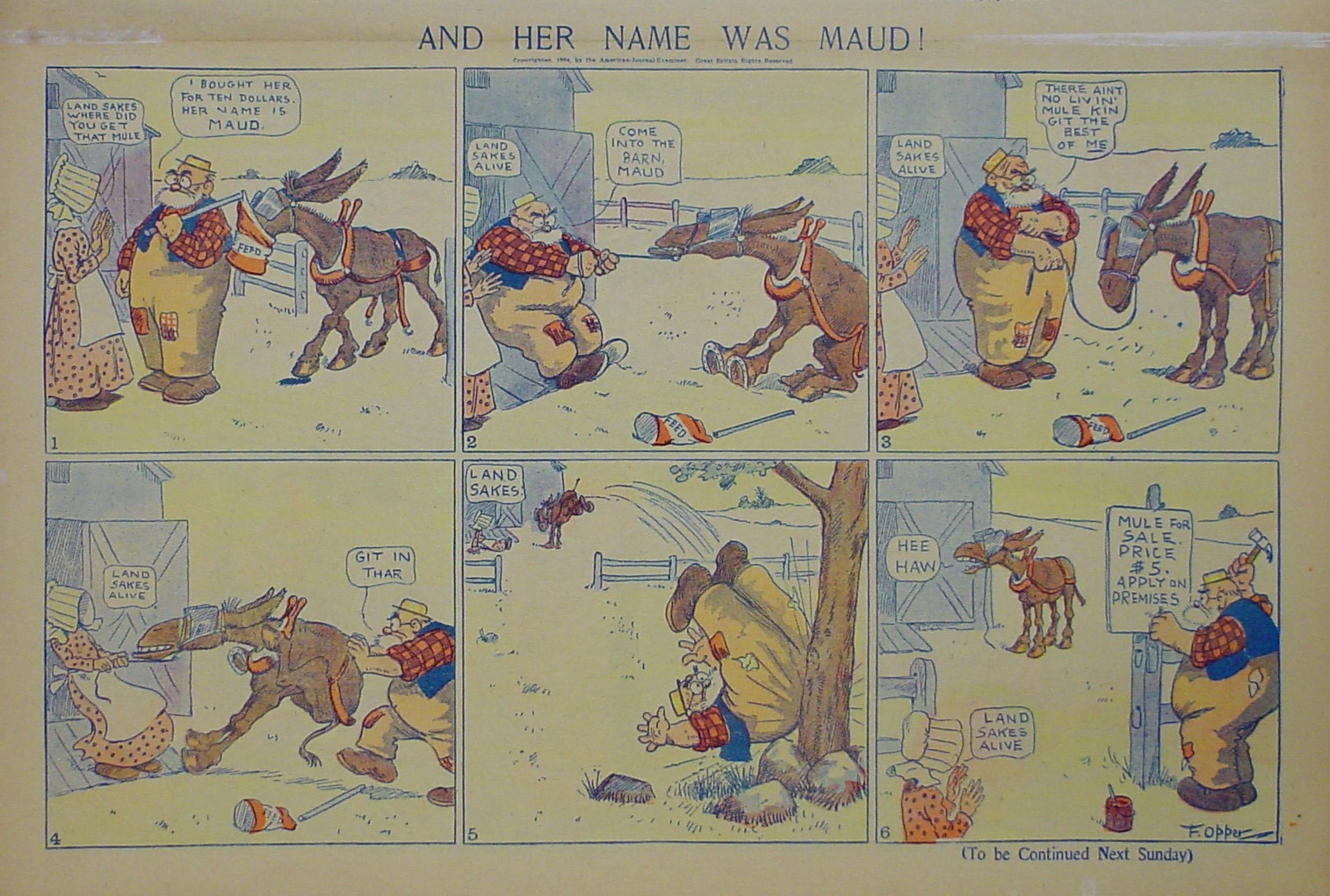