Edwina Dumm (1893-1990) was born in Upper Sandusky, Ohio, and she graduated from Central High School in Columbus in 1911. She cartooned for the Columbus Monitor from its first edition on August 7, 1915, and she was the nation’s first full-time female editorial cartoonist until the paper folded in July 1917. She then moved to New York City where she created the comic strip Cap Stubbs and Tippie, which she drew until her retirement in 1966. Her love of animals, especially dogs, was reflected in the cartoons she drew for several magazines and the books and sheet music she illustrated.

Dumm comments in this cartoon on the Adamson Act of 1916 which limited work days on railroads involved in interstate commmerce to eight-hours and required that time-and-a-half be paid for overtime work. 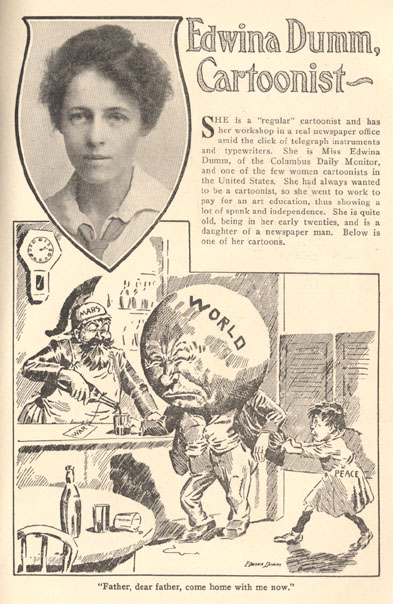