Billy Ireland (1880-1935), a native of Chillicothe, Ohio, was hired by the Columbus Dispatch shortly after his high school graduation in 1898. A self-taught cartoonist, he worked for the Dispatch until his death and was famous both for his editorial cartoons and for his Sunday feature The Passing Show. Ireland had several books published, and he mentored many younger cartoonists including Milton Caniff and Noel Sickles. He turned down syndication contracts and several job offers from larger metropolitan newspapers, saying that he did not want to leave Columbus–he just wanted to get back to Chillicothe. Ireland’s affection for his home state is reflected in his work.

Self-caricature by Billy Ireland. Detail from The Passing Show, January 24, 1932. 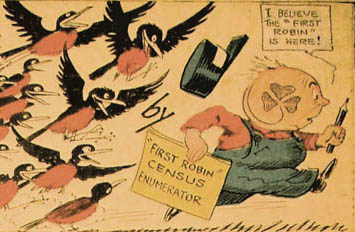 Ireland created a different title design each week for his Sunday feature, and many featured his trademark self-caricature, the plump janitor of The Passing Show with a shamrock on his face.