Richard Felton Outcault (1863-1928) is known as the father of the newspaper comic strip. He was born in Lancaster, Ohio, and educated in Cincinnati, where he worked painting rural scenes on safes. He then was hired as a draftsman at Thomas Edison’s New Jersey laboratories, after which he went to the New York World to make scientific drawings. Outcault’s comic strip Hogan’s Alley, which debuted in 1895, is considered the first successful newspaper comic strip. It featured Mickey Dugan, who is better known as the Yellow Kid. The popularity of the Yellow Kid fed the rivalry between newspaper magnates Hearst and Pulitzer. In 1902 Outcault created Buster Brown, which he drew until 1921. 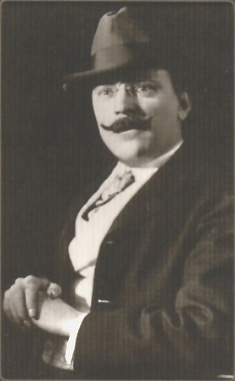