May 8, 2018 / Lisa Iacobellis / Comments Off on Photo Open House to Celebrate 50 Years of OCCS

The Ohio Camera Collectors Society (OCCS) was founded fifty years ago, after the Photography and Cinema Department at OSU held one of the earliest conferences in the country devoted to the history of photography.  We join the group in their anniversary celebration by holding an open house on Saturday, May 19, from 1-5, in Thompson Library Special Collections.  An emphasis will be placed on Ohio connections, including a camera designed and manufactured in Ohio during the early years of flight.  From 3-4 local photographer, Ed Gately, will present a demonstration of the collodion wet plate process, the technology used by the earliest photo students on campus back in the 1890s.  We’ll even display some of those early student works! 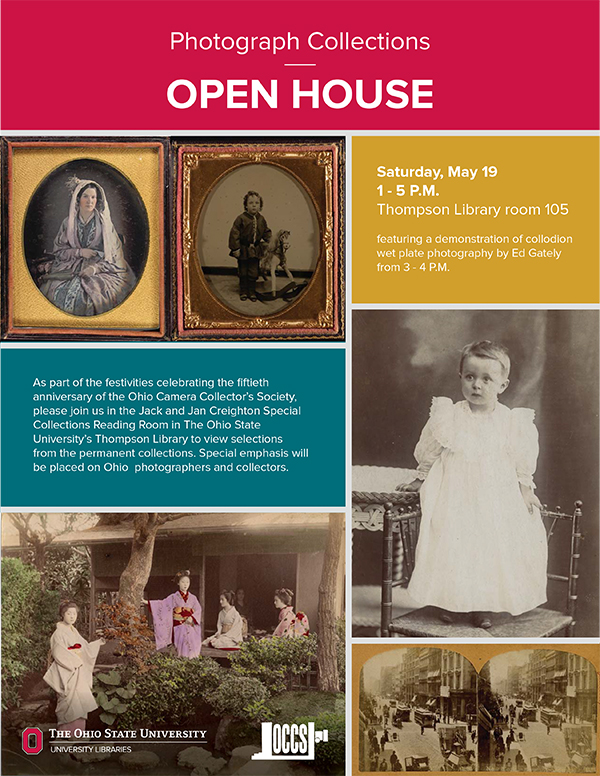 “A Refugee of the San Francisco Earthquake and Fire of April 18th, 1906”

The photograph collections in Rare Books and Manuscripts offer students a strong historical survey of processes and movements, from daguerreotypes to modern digital prints, as well as selections by some of the most recognized names in the medium.  Researchers are less likely to know about the less aesthetic and more purely historical collections, such as those documenting life in central Ohio in the early twentieth century, or the experiences of soldiers and researchers outside of Ohio.  On this anniversary of the San Francisco earthquake we call your attention to a collection of photographs taken by individuals living in that city, who responded immediately to the devastation around them. 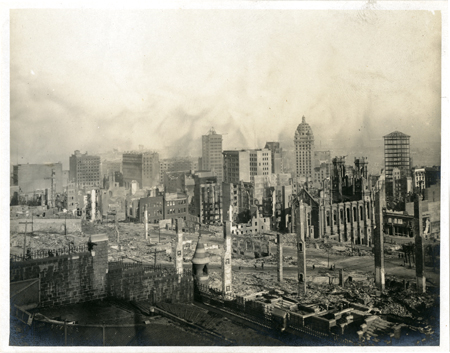 This collection of well over 100 images was created by DeWitt C. Morrill, brother of Mrs. Frank H. Haskett, former University photographer, and son of Harrison D. Morrill, alumni secretary of OSU, whose 1925 funeral was presided over by President William Oxley Thompson. 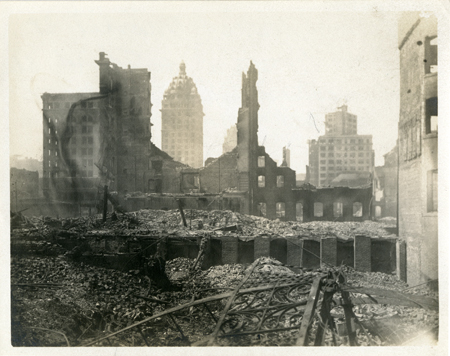 Looking Toward Market Street from Howard and Third (to the south)

DeWitt took photographs as he wandered the city immediately after the earthquake, and kept careful notes, which he entitled “Notebook of a Refugee of the San Francisco Earthquake and Fire of April 18th, 1906.”  He rounded out his historical collection with post cards and additional photographs from the Pillsbury Picture Company, established earlier that year by Arthur C. Pillsbury (perhaps a friend).  While many photographs of the San Francisco Earthquake are available at other institutions, the notes taken by D.C. Morrill, and the identifications on the versos of his photographic prints bring an added value to this collection. 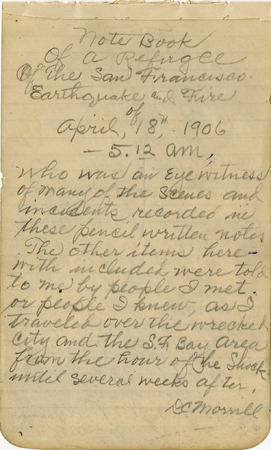 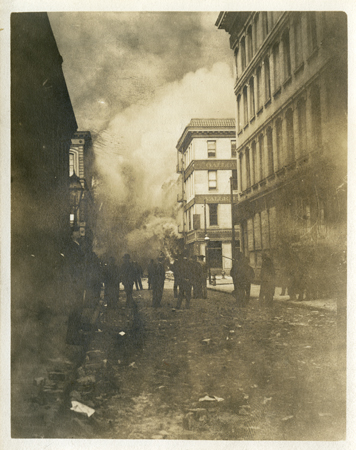 Stop by next Thursday afternoon to take a look at some examples of the impressive photograph collections held by OSU Libraries, and housed in Thompson Library Special Collections.   I think you’ll be surprised by the range – including art photography, celebrity portraits, scientific experimentation and social documentary, dating from the very beginnings of the medium through the present day.  You’ll see some big names that you recognize, and learn some new ones that you’ll want to remember. 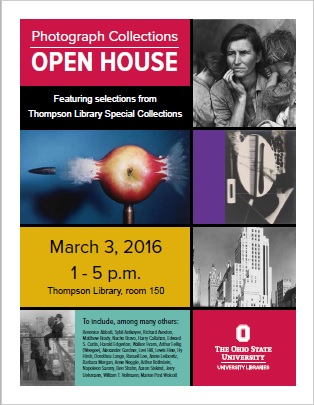 Japan after August 6, 1945 (The Allied Occupation)

On this day after the 70th anniversary of the Hiroshima bombing we might turn our thoughts to post World War II Japan, the subject matter of a collection of photographs donated to Rare Books and Manuscripts in 2003 by anthropologist John W. Bennett.  His photographs document the period 1948-1951.  They were published, along with excerpts from his journals and other textual material, as an online exhibition: “Doing Photography and Social Research in the Allied Occupation of Japan, 1948-1951: A Personal and Professional Memoir” 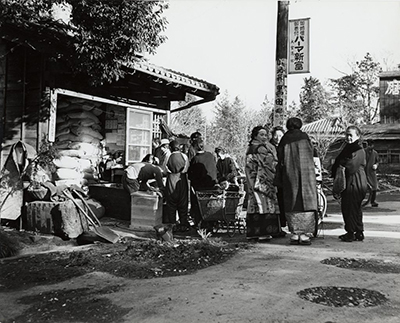 John W. Bennett, “The Rice Ration in Suburban Tokyo”
(from a selection of Urban Images)

Man Ray (Emmanuel Radnitzky) was born in Philadelphia on this date,  August 27, in the year 1890.

The Ohio State University owns copy number 3 of a limited edition portfolio of Man Ray’s prints, Champs délicieux: album de photographies (1922).  This was a 1969 gift of David Howald Shawn, in memory of his great-uncle, Ferdinand Howald.  Howald, of Columbus, Ohio acquired an impressive collection of Modern paintings, of which a significant number were donated to the Columbus Museum of Art (then the Columbus Gallery of Fine Arts).  Howald also provided financial support to Man Ray during his early years in Paris.  In return for that patronage he selected works of his choice from Man Ray’s production.  It is not clear exactly how the portfolio came into the possession of the art collector, but this selection of photographs, and the letters written by Man Ray to Howald remained in the family until donated to OSU. 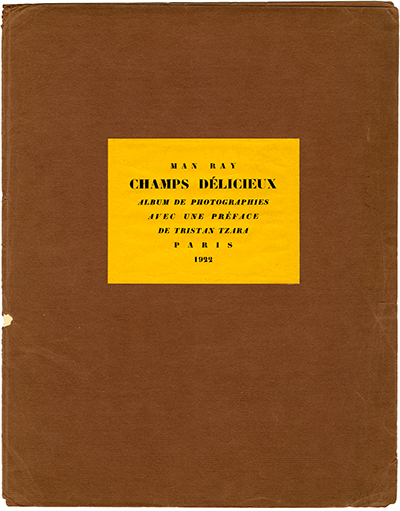 Each copy of the portfolio contains his own photographic reproductions  of a  selection of “rayographs,” images made on photo-sensitive paper without the use of a camera (photograms).   Man Ray’s illusions of space, texture, translucency and opaqueness in these works have served as an inspiration to photography students, who often try their own hand at this process.

Man Ray describes the project briefly in a letter to Howald dated May 28, 1922.  Excerpts are provided below.  ( I also include his comments about the more abstract quality of some of his paintings at that time, and mention of his new friends.) 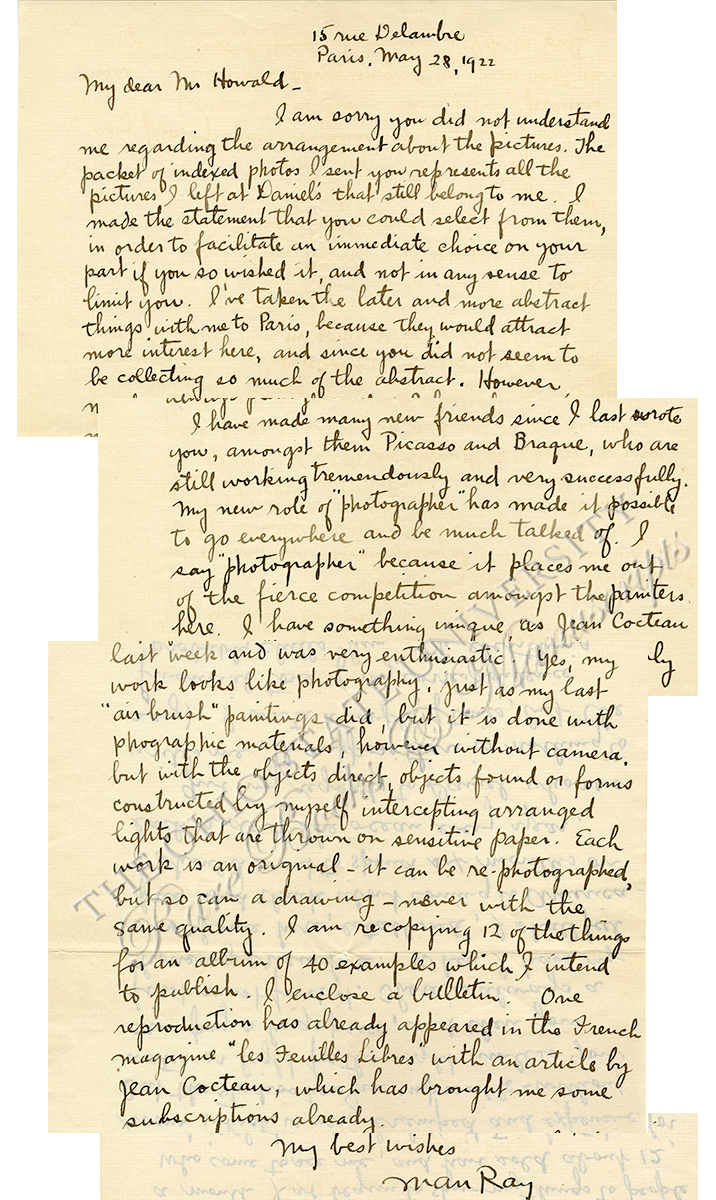 Berenice Abbott was born in Springfield, Ohio on this date in 1898.  She was raised in the Buckeye State and graduated from Lincoln High School in Cleveland, Ohio in 1917.  In the autumn of that year she returned to central Ohio to begin her studies at The Ohio State University.  The freshman soon left Columbus however, moving with friends to New York in 1918.  She developed an interest in the arts, and moved to Paris in 1921 to study sculpture.  It was there that she met Man Ray, and was hired as his darkroom assistant.  Man Ray’s Champs délicieux: album de photographies (a copy is owned by OSU), is representative of his experimental work at the time.

Abbott found her true calling in photography.  She set up her own studio in Paris in 1926, and remained there until 1929, when she returned to New York and established an independent studio in the U.S.  She operated from that studio until 1966, while doing freelance and contract work, as well as teaching courses in photography.  Abbott was also fascinated with science and challenged by the limitations of the equipment available to her.  She explored alternatives, receiving six patents for her inventions.

Soon after arriving in New York in 1929 she began shooting architectural images inspired by the Paris views of Eugène Atget, and from 1935-38 directed the “Changing New York” Project, part of the Federal Arts Project within the Works Progress Administration.  The photographs owned by OSU were made as part of that effort.   The following is a small selection from the collection. 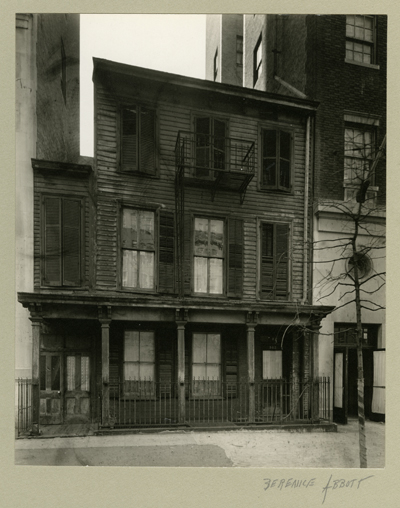 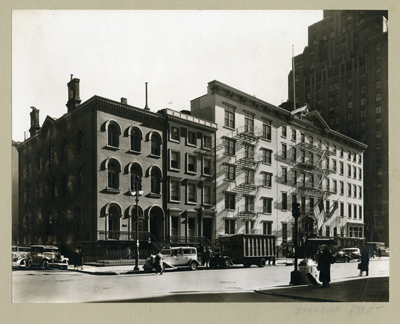 Of course, nothing can substitute for the experience of seeing the original prints in person.  One appeal of these photographs is their integrity as artifacts.  All but one are signed, still affixed to the boards that Abbott mounted them on, and include labeling related to the WPA project. 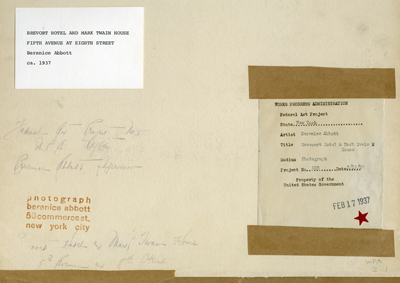 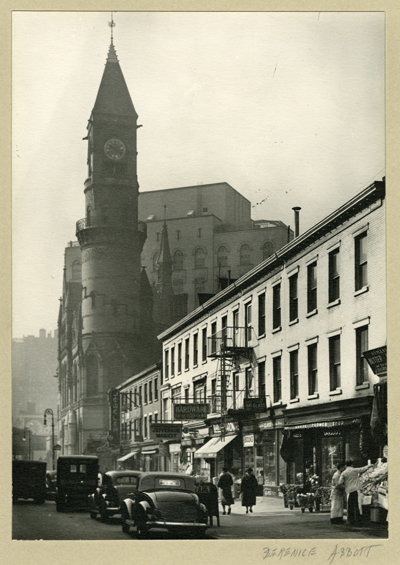 While some works lure us into a seemingly comfortable pace of everyday life in the 1930s, others present a more daring approach to space and perspective. 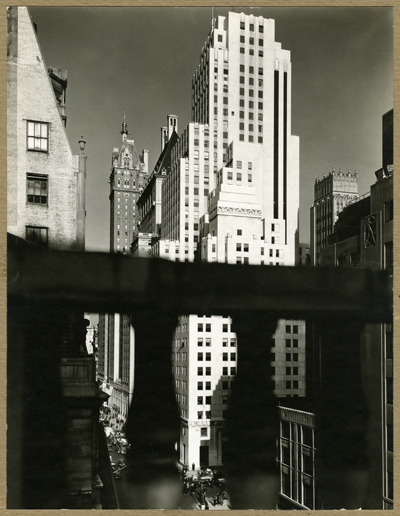 In 1986 OSU held a symposium and an exhibition of the works of Berenice Abbott and awarded the photographer an Honorary Doctorate of Humane Letters.   For more information about her visit consult the 1986 issues of The Lantern.   The “Changing New York” prints held in Rare Books and Manuscripts represent one part of that exhibit.  Also included were some of her scientific images.  For a more complete view of the career of the artist, visit the galleries of the online archive.

To see some actual prints that were touched by the artist herself, visit the Special Collections reading room in Thompson Library.