December 18, 2015 / Lisa Iacobellis / Comments Off on Celebrating a Holiday Classic

“I will honour Christmas in my heart, and try to keep it all the year,” is Ebenezer Scrooge’s exclamation at the end of Charles Dickens’ A Christmas Carol, which was first published 172 years ago (Dec. 19, 1843).  The wildly popular novella is credited with reforming the public image and celebration of Christmas to one of celebration and humanitarianism.  While we don’t hold a copy of that first edition, Rare Books does have a later collection of Christmas stories, which features the revelry of Mr. Fezziwig’s party on the frontispiece: 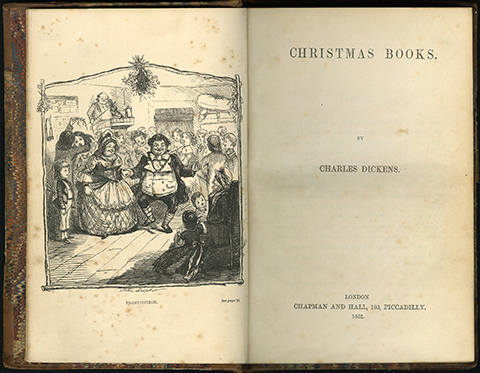 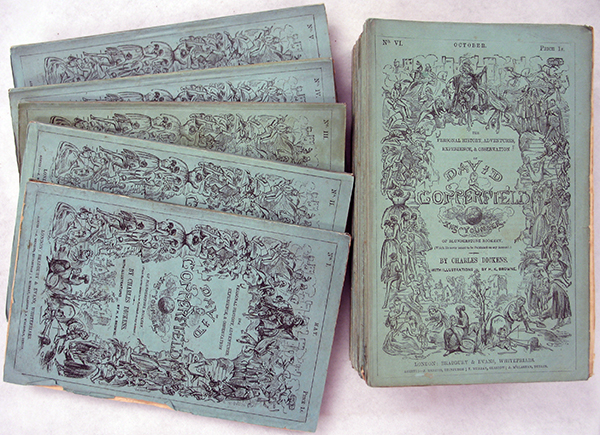 Want more Dickens?  Don’t forget the annual Dickens events at Ohio Village (Ohio History Connection), or visit downtown Cambridge, Ohio during the holidays for an abundance of Dickens characters and scenes on display along the sidewalks.  In fact, if you stop in at the welcome center to warm up you can slip into something more appropriate for the time period and take photos. 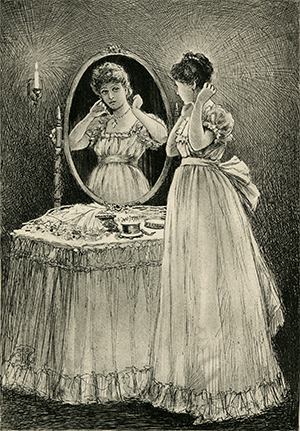 Frontispiece from an 1898 Boston edition of Mansfield Park.

Surely we can’t let the 240th anniversary of Jane Austen’s  birth pass by without at least  a moment of recognition.  Some of the treasures housed in the Rare Books and Manuscripts collection are first editions of Mansfield Park, Northanger Abbey, and Emma, all happily acquired within the last decade.

Although these first editions did not contain any illustrations, like the charming image on the right from a late nineteenth-century American edition, they are pristine examples of the multi-volume novels published during Austen’s lifetime.  In just a week we celebrate another milestone  –  200 years since the release of Emma.

We recognize today the 1836 birth of poet Sarah Morgan Bryan Piatt.  Born in Kentucky, she married into the Piatt family in 1861, whose castles in West Liberty,  Ohio are a popular tourist destination ( http://www.piattcastles.org/ ).  The Rare Books and Manuscripts Library holds a valuable collection of research material on Piatt as well as original published versions of her poems in books and newspapers, making it a destination for Piatt scholars. Contact rarebooks@osu.edu for more details about the collections, and watch this space for announcements about two digitization projects currently underway.

On this special anniversary therefore, we claim her as our own, and raise a glass to her memory! 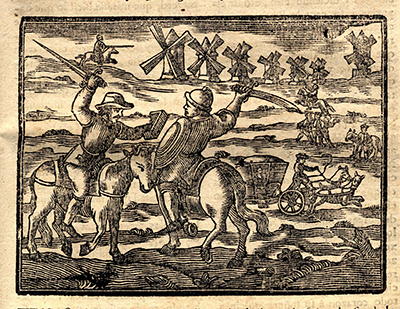 September 29th marks the birthday of Miguel de Cervantes Saavedra in 1547.  Author of Don Quixote, Cervantes is often credited as being the first novelist in the western literary tradition, the novel being considered as a separate literary genre from chivalric romances that Don Quixote satirizes.

The Cervantes holdings in the Rare Books and Manuscripts Library are among the richest of our collections, beginning with the 1605 first edition and other editions of Don Quixote through the ages up to Edith Grossman’s 21st century translation in commemoration of the 400th anniversary of that monumental work.  I append John M. Bennett’s introduction to the Cervantes finding aid, which can be fully accessed at  http://library.osu.edu/finding-aids/rarebooks/cervantes.php: 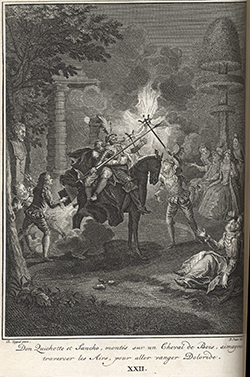 The Talfourd P. Linn Cervantes Collection is a significant gathering of Cervantes Materials, especially strong in the areas of early editions of Don Quixote in Spanish, fine and illustrated editions, translations into English and French, and translations into numerous other languages. It also includes other valuable materials, such as early and important editions of Cervantes’ other works, including Las Novelas Ejemplares and Los Trabajos de Persiles y Sigismunda, adaptations, criticism, illustrations, and works by other authors inspired by Cervantes. As of the end of 2001, the collection consisted of more than 425 titles.

The core of the collection is a 1965 gift from the family of Talfourd P. Linn, a noted attorney from Zanesville and Columbus, who collected Cervantes materials throughout his life. His collection consisted of 114 titles, and includes some of the most important pieces in the collection, such as the 1605 first edition of Don Quixote, and the 1614 first edition of Alonso Fernández de Avellaneda’s “falso Quijote.”

Shortly afterwards, the library acquired the Cervantes collection of Oscar B. Cintas, a Cuban industrialist and ambassador to the United States. This consisted of some 171 titles, and enormously enriched the collection as a whole.

The collection has also grown due to the efforts of the librarians and staff of the Rare Books and Manuscripts Library, who have acquired numerous titles over the years and continue to do so. Today the Talfourd P. Linn Cervantes Collection must be regarded as one of the best in its field, and as a major resource for research not only into Cervantes, but into the fields of book publishing, bindings, translations, and the illustrated book.

In this guide, entries are arranged chronologically by publication date, except in the Adaptations and Other Literary Works, and Illustrations sections.

Further bibliographic details on the titles in the original Linn gift may be found in A Catalogue of the Talfourd P. Linn Collection of Cervantes Materials, 1963, Z8158 L5. 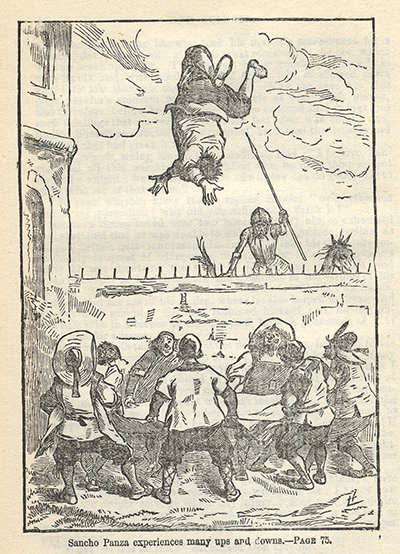 Who Was William Charvat?

November 19, 2012 / Lisa Iacobellis / Comments Off on Who Was William Charvat?

Frequently we hear from members of our Ohio State community, that they never knew we had particularly strong holdings in such diverse areas as Cervantes, Children’s Science, Photography, even Scientology.  We are particularly surprised when we hear from our local scholarly constituency that they have never heard of the William Charvat Collection of American Fiction, which is University Libraries’ strongest research book collection and among the greatest collections of its kind in the nation.  Of course, we should modestly admit that not everyone’s life revolves about the Ohio State University Libraries (OSUL) and, try as we might to publicize and promote our collections, sometimes we fail to reach that very audience which might be most interested in both a popular and academic resource like the Charvat Collection.  If we are reaching that audience now, here is a link to the Charvat Collection web site:  http://library.osu.edu/find/collections/charvat/. Of course, the Charvat Collection, at least in name, would never have existed if there had not been a William Charvat and, though we discuss him briefly on the web site, he is deserving of more recognition. 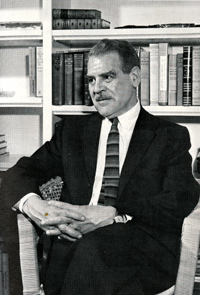 The early life of William Charvat is sketchy.  He was born in New York City on July 15, 1905 and attended New York University where he received hs B.S. and M.A. degrees.  The University of Pennsylvania awarded him his Ph.D. in 1934.  After a brief stint at New York University, Charvat came to the Ohio State University in 1944 where he began his career as a distinguished professor of American literature in the Department of English.  For much of his time at Ohio State, he was part of a triumvirate of American literature faculty that included Roy Harvey Pearce and Claude Simpson who were among the most respected literary scholars of their time.  This academic trio, for instance, was responsible for establishing the Centenary Hawthorne Edition at Ohio State, an editorial project that became the model, under the auspices of the Center for Editions of American Authors, at other universities throughout the country, e.g., William Dean Howells at Indiana University, Herman Melville at Northwestern University, Mark Twain at the University of California, Berkeley, etc.

William Charvat, in his individual scholarship, was a pioneer in his approach toward the analysis and interpretation of American literary culture. Today, most scholars take for granted that the study of the book trade is a necessary prerequisite to our understanding of the influence that the business of writing had not only on literary production, but on the shape of an artist’s aesthetic vision. Yet Charvat’s Literary Publishing in America, 1790-1850 (University of Pennsylvania Press, 1959) and The Profession of Authorship in America, 1800-1870 (published posthumously by Ohio State University Press, 1968) were groundbreaking works in the study of American book history. Their respective reissues by the University of Massachusetts Press in 1993 and Columbia University in 1992 attest to the enduring value of William Charvat’s contribution to American literary scholarship.

Charvat’s bibliographic prescience was equally impressive. It was under his guidance that the American fiction collection at OSUL became the great research collection that it is today. Established in the late 1950s, the collection was officially named the William Charvat Collection of American Fiction upon Charvat’s death in 1966. Charvat recognized early on the importance of a broad-based approach to the study of American literature, and that in addition to having the works of major canonical writers always at hand, scholars needed access to those lesser lights better known for their local-color fiction, popular genre writing, and treatment of disreputable, if not repugnant, subjects within the realm of fiction. Charvat believed that a comprehensive library collection of a particular area within a national literature, if not an entire national literature itself, was an indispensable resource for the scholarly community. At Charvat’s urging the Rare Books and Manuscripts Library concentrated its collection efforts on amassing American fiction following the criteria of Lyle Wright’s three-volume A Contribution to American Fiction, 1789-1900, criteria for selection that have remained constant for close to five decades: first American printings of adult fiction by United States authors.

Howard Mumford Jones, another giant in American literary scholarship from an earlier generation, summarized well William Charvat’s academic standing in his Scholarship, Novelty, and Teaching:  An Address in Memory of the Late William Charvat (The Ohio State University Press for the Department of English;, Ohio State University, [1968]):  “The best contribution of the scholar to education is to enrich scholarship, to continue it, to make it available to all those competent and ready to accept the philosophy that scholarship implies.  Such seems to me still the proper goal and appropriate contribution of the scholars to this or any other time.  If I understand him correctly, this also William Charvat believed.”

December 8, 2009 / Lisa Iacobellis / Comments Off on Raymond Carver in the William Charvat Collection

The William Charvat Collection of American Literature is the principal repository for the literary archive of Raymond Carver and this year has been a particularly good year for Carver.  The Library of America issued a Carver volume this past summer and James Carroll, in a review for the Times Literary Supplement (http://entertainment.timesonline.co.uk/tol/arts_and_entertainment/the_tls/article6731684.ece), noted that “the pleasure of reading Carver, who died in 1988 at the age of fifty, derives partly from his bizarre scenarios and from absurdist dialogue which yet retains the quality of overheard conversation; equally, it comes from pace and phrasing, even paragraphing and punctuation, which the author controls with what are practically musical skills.”  In November, Scribner released the long awaited biography of Carver by Carol Sklenicka, Raymond Carver: A Writer’s Life.   In a front page review for the New York Times Book Review, Stephen King calls Carver “surely the most influential writer of American short stories in the second half of the 20th century.” (http://www.nytimes.com/2009/11/22/books/review/King-t.html) In appreciation of Carver’s achievement RBMS will be displaying the new biography, the Library of America volume and other items in its display case in the East Atrium of the Thompson Library.  Please watch for it in January 2010.