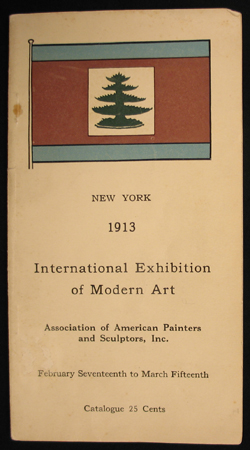 Yesterday marked 100 years since the opening of The International Exhibition of Modern Art in New York, the “Armory Show,” long recognized for its significant role in introducing Americans to the avant-garde of modern European art.  Works like Matisse’s Blue Nude and Duchamp’s Nude Descending a Staircase No.2 startled visitors and elicited strong negative responses, but also heralded a new direction in American art.   Holding the catalog of the exhibition in your hands stirs the imagination and opens a portal to the sights and sounds of that era.

While there had been a number of independent exhibitions of the works of these artists held in Europe previously, one must not assume that the new styles had become mainstream there.

The complete run of the Paris Salon catalogs are also housed in Rare Books and Manuscripts.  As an art historian, I felt compelled to reach for the catalogs that marked critical years in the careers of Eugene Delacroix, Gustave Courbet or Edouard Manet, but reason suggested that I should highlight the one from 1913.  One will not find works like the Blue Nude or Nude Descending a Staircase No.2 here.  While Realism and Impressionism had gained more acceptance, the traditional Academic fare still dominated the Paris show. 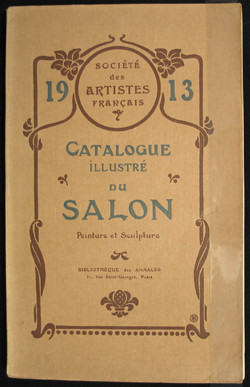 One finds little change in what was presented to the Parisian public between the years 1863 and 1913.

Being able to see an artist’s works within the context of an entire exhibit is of tremendous value.  Shelley Staples tackled such a challenge for the Armory Show back in 2001, creating a web site that attempts to recreate the full experience: http://xroads.virginia.edu/~museum/armory/armoryshow.html  Once you enter you can move from gallery to gallery following the exhibit layout provided in the catalog.  If you’ve not visited this site before, take time to commemorate this centennial by exploring the Armory Show yourself!

Rare Books and Manuscripts Celebrates the Buser Collection
Logging In...