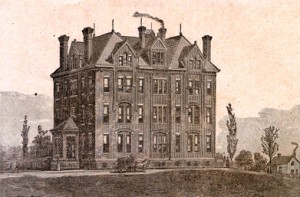 Hawkes Hospital of Mt. Carmel was founded by Dr. W. B. Hawkes in 1885. He donated the lot, 150 feet square, and gave $10,000 in United States Government bonds. Before the building was completed Dr. Hawkes died, and Dr. John W. Hamilton (1823-1898) completed the work. The hospital was located on West Street and Davis Avenue.

Dr. Hamilton secured the services of the Sisters of the Holy Cross and Mother Angela, and formally opened the Hospital on July 5, 1856.

The first addition to the hospital was made in 1891. At that time the building was enlarged to make room for more patients.

The corner-stone for this building was blessed by Bishop Watterson on May 31, 1891.

In 1906 a second building adjoining the old one was started. It contained a chapel and 120 additional private rooms for patients. It was on the 20th anniversary of the founding of the hospital that Bishop Hartley broke ground for this wing.

Another building, consisting of 120 rooms, with recreation halls, library and three classrooms, was erected, and opened on February 2, 1921. This was the home for the student nurses. In 1934, on a lot to the west of the hospital, and connected with the hospital, a building for convenience of the Sisters was erected. It was a gift of Mrs. Neill Darrow.

The Training School for Nurses was opened on September 15, 1903. The first graduates received their diplomas in 1906. Eight Sisters were included in the class. The Training School was affiliated with the New York Board of Regents in 1922, and with Western Reserve in Cleveland in 1928. In 1934, there were 114 nurses and 26 Sisters on the service roll of the hospital.

The hospital was one of the first to meet the requirements of the American College of Surgeons in 1919 and was recognized as a Class A hospital. In 1934, it was equipped to take care of 239 patients, including 25 bassinets. The hospital was operated in connection with the Columbus Medical College (1876-1892).