It’s that time of year when Christmas lights are strung and ugly sweaters are worn. When singing along with your favorite carols have you ever thought of the copyright status behind these famous songs?

Here are nine well known Christmas songs that are in the public domain.

Away in a Manger

Once rumored to have been authored by theologian Martin Luther, this carol made an early appearance in 1882. Originally titled “Luther’s Cradle Song” an anonymous author attributed the song as one Luther wrote for his children. This was dispelled for a number of reasons, and a source states the song may have instead been associated with a celebration for the 400th anniversary of Luther’s birth in 1883. There are two musical settings commonly assigned with the lyrics, one by William J. Kirkpatrick (1895) and the other by James Ramsey Murray (1887). In 1996 it was ranked as the second most popular carol in Britain. The text of the song is based on verses from Luke 2:4-7. Source: Away in a Manger

Originally titled Deck the Hall, this is a Welsh melody that dates back to the 16th century. The famous chorus ‘fa la la la la’ may date to the medieval period, while the modern English lyrics were written by Scottish musician Thomas Oliphant in 1862. The melody comes from a traditional Welsh carol “Nos Galan”, a traditional New Year’s Eve ballad. The plural of ‘hall’ was first published in 1892. Source: Deck the Halls Song History

Perhaps one of the most well-known Christmas songs, Jingle Bells was originally written for the Thanksgiving season by James Lord Pierpont in 1857. It was copyrighted as One Horse Open Sleigh, but the name was revised when it was published in 1859 as “Jingle Bells, or the One Horse Open Sleigh”. The title comes from the common practice of placing bells on a horse’s harness to avoid collisions because a horse drawn sleigh makes little noise. Jingle Bells was the first song broadcast from outer space when two astronauts on Gemini 6 performed the song aboard the spacecraft in 1965 after reporting a sleigh like object in the polar orbit. Source: 8 Things You May Not Know About “Jingle Bells” 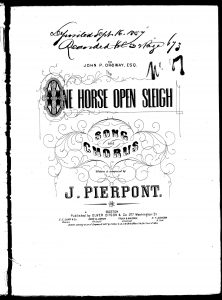 Translated from the German “Stille Nacht, heilige Nacht”, the song was composed by Franz Xaver Gruber, a schoolmaster, with lyrics by Father Joseph Mohr, in Oberndorf bei Salzburg, Austria in 1818. Bing Crosby’s version is the third bestselling single of all time, and the song was declared an intangible cultural heritage by UNESCO in 2011. Silent Night, as we know it today was translated to English in 1859 by John Freeman Young, an Episcopal priest. Source: Silent Night

Up on the House Top

Written by Benjamin Hanby in 1864, Up on the House Top was considered the first Christmas song to focus primarily on Santa Claus. Sources credit Hanby’s inspiration for the song as Clement C. Moore’s 1822 poem “A Visit from St. Nicholas”, commonly known as “The Night Before Christmas”. The song was originally titled Santa Claus and meant to be performed as a sing along. According to The Christmas Carol Reader it is the second oldest secular Christmas song, only surpassed by Jingle Bells. Source: Up on the Housetop

Written for the 1903 operetta Babes in Toyland, the whimsical song features a cast of Mother Goose characters in a magical toy filled land. The lyrics were written by Glenn MacDonough with music by Victor Herbert. The lyrics of the song have no direct ties to Christmas or the holiday season, but the spirit of the song, the happiness toys bring to children, has been associated with Santa Claus. The operetta has been adapted into 4 films of the same title, beginning in 1934 to the most recent animated version in 1997. Source: Babes in Toyland

The Twelve Days of Christmas

One of the most well-known cumulative songs, the carol describes an increasingly grand set of gifts for the twelve days of Christmas, beginning Christmas Day. The song was first published in 1780 without any music, and has a Roud Folk Song Index of 68. The standard tune it is now associated with was derived from a 1909 arrangement by Frederic Austin. In one 19th century variant, the gifts come from “my mother” rather than “my true love”.  PNC Financial annually calculates the total cost of all the gifts presented in the song, and the estimate for 2018 total comes to $39,0094.93. Source: The Twelve Days of Christmas Explained

We Wish You a Merry Christmas

The famous greeting which gives name to the song, “a merry Christmas and a happy New Year” is recorded from 18th century England. The song is a nod to the dynamic between the rich and poor, and describes townspeople parading the steps of the rich calling for figgy pudding and refusing to leave until it was delivered. The modern popularity of the song comes from a Bristol based composer Arthur Warrell, who arranged the song for the University of Bristol Madrigal singers in 1935. The very early history of the carol is unknown; it is notoriously missing from popular song books of the 18th and 19th centuries. Source: We Wish You a Merry Christmas

Also known as O Tannenbaum, O Christmas Tree is a German Christmas song; a tannenbaum is the German word for a fir tree. The modern lyrics were written in 1824, and instead of referring to Christmas, reference the evergreen as a symbol of constancy and faithfulness. The custom of Christmas trees developed throughout the 19th century, and the song became associated with the holiday. The song was famously used in the 1965 television special A Charlie Brown Christmas. Source: O Christmas Tree: Lyrics and Chords

Unfortunately the songs listed below are still under copyright protection so we’ll have to wait a little while before they enter the public domain.

The Wait is Over! Public Domain Day 2019