We previously voiced concerns that the secretive negotiations surrounding the Trans-Pacific Partnership (TPP) could negatively impact copyright, privacy, free speech and the application of fair use online. Unfortunately, WikiLeaks’ release of the TPP Intellectual Property Rights Chapter earlier this month confirmed suspicions that a treaty negotiated in secret under the supervision of corporate advisors would favor corporate interests and neglect or infringe on public rights.

TPP is a broad multinational trade agreement with significant implications for intellectual property rights. A series of leaked documents (Feb. 2011, Aug. 2012, Nov. 2013) provide the only information to date regarding the specific contents of the agreement. Negotiations are conducted behind closed doors and access to the treaty proposal is restricted to select representatives from the participating countries and several hundred corporate advisors. The list of participating countries presently includes the United States, Canada, Mexico, Chile, Peru, Malaysia, Singapore, Japan, Vietnam, Brunei and Australia. 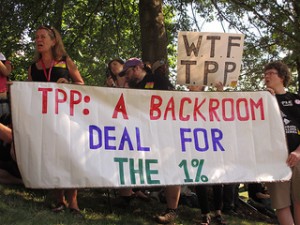 How would TPP affect copyright?

U.S. negotiators claim that TPP would merely export existing U.S. copyright policies. However, the recent leak of the IP chapter exposes this statement as a misrepresentation of the actual agreement. Though TPP draws heavily on U.S. policies, it tends to codify the most restrictive aspects while forgoing many of the existing exceptions that permit some flexibility in the use of intellectual property.

The Electronic Frontier Foundation (EFF) and Knowledge Ecology International (KEI) have both provided thoughtful analyses of the latest leaked IP chapter that delve into the copyright ramifications of TPP. Although many elements apparently remain under discussion, the leaked document provides some insights regarding what may be in store. For instance, TPP as written would:

KEI summarizes the situation thus: “Compared to existing multilateral agreements, the TPP IPR chapter proposes the granting of more patents, the creation of intellectual property rights on data, the extension of the terms of protection for patents and copyrights, expansions of right holder privileges, and increases in the penalties for infringement. The TPP text shrinks the space for exceptions in all types of intellectual property rights. Negotiated in secret, the proposed text is bad for access to knowledge, bad for access to medicine, and profoundly bad for innovation.”

This push to export American copyright policies is also problematic because it assumes that our current laws are desirable and effective. On the contrary, there is growing sentiment that existing U.S. copyright terms are already too restrictive, and that policies such as the DMCA are in need of reform or repeal. Earlier this year, the head of the U.S. Copyright Office testified before Congress and proposed a long list of issues in need of attention and possible reform, such as copyright term length, DMCA efficacy, statutory damages, licensing, and digital transmission of copyrighted materials. However, current domestic policies would become intractable if codified in an international treaty such as TPP; Congress would be unable to amend U.S. legislation without running afoul of international obligations and would face extreme pressure to conform to the treaty requirements. Techdirt’s critical commentary examines many of these issues in greater detail.

How did this happen?

Concerns rightly persist over the process and presumptively biased outcome of these surreptitious negotiations. Policymakers have favored powerful corporate interests by actively soliciting their guidance while simultaneously obstructing public participation. It is no surprise, then, that the leaked IP chapter caters extensively to Big Content and does little to protect public interests. By excluding the public from negotiations, policymakers forgo the opportunity to reach a balanced arrangement and invite significant damage to public rights that will be very difficult to repair in the future.

Further efforts to insulate TPP from public debate are underway. Almost all requests from members of Congress to review the proposal have been denied despite congressional jurisdiction over international trade agreements.  The Obama administration’s request for “trade promotion authority” or “fast track authority” seeks to further erode congressional oversight by requiring Congress to vote on trade agreements within 90 days without the opportunity to request amendments.

It is extremely implausible that TPP would emerge intact from Congress under normal circumstances, but with fast track authority in effect Congress could be enticed to swallow the many unsavory aspects of TPP in order to obtain the more desirable components.  EFF argues that “this is a classic example of policy laundering, whereby corporate interests use secretive international forums to trump the democratic process at the national level.” It remains to be seen whether Congress will approve the request for trade promotion authority and essentially forfeit their constitutional checks and balances over the Executive Branch.

What can you do to help fix TPP?

Public attention and involvement is critical at this time to dispute the furtive deal making and restrictive IP terms of TPP as President Obama and U.S. negotiators have expressed a desire to sign the trade agreement by the end of the year.

October 4, 2012 / baird.144@osu.edu / Comments Off on Private Negotiations Could Affect Public Internet Use

The Trans-Pacific Partnership (TPP) is a free trade agreement that is currently being negotiated on behalf of United States citizens by Assistant U.S. Trade Representative Barbara Weisel. There are currently nine countries involved in the negotiations; an invitation was extended to Mexico and Canada in summer 2012. The TPP includes a section on intellectual property (IP) law and enforcement that could affect privacy, free speech and even the application of fair use online. It is being negotiated entirely in secret and could affect copyright law in all eleven participating countries should they ratify this agreement.

Concerns over the process, as well as the potential outcome, of this trade agreement have been expressed at Electronic Frontier Foundation (EFF), Ars Technica, and Techdirt.  Many concerns about the TPP have to do with the perception that this is yet another attempt to create wide-reaching policies in order to protect the intellectual property of private companies (one of the major issues with the failed SOPA and PIPA proposed bills in Congress).

Another common complaint is about the high level of secrecy under which the negotiations are being held. So far there has been no official release of any text of the TPP draft agreement, although a copy of the U.S. proposed IP chapter was leaked in February 2011. On August 3, 2012, the proposed text of the Exceptions and Limitations section of the IP chapter of TPP was leaked, as well.

Members of Congress, who have jurisdiction over all international trade agreements, have repeatedly requested access to the text of the TPP . So far they have been continuously denied. U.S. House Representative Darrell Issa (R-CA), whose constituency includes San Diego, requested permission to sit in on the round of negotiations that was held there in July 2012, but he was also denied.

Although Mexico and Canada were both invited to join the TPP agreement, they were required to sign on without seeing the agreement first and without having the option to negotiate any already agreed upon portions. Additionally, a 90 day probationary period kept both countries from participating in the last two rounds of negotiations which were held in June and September 2012. Michael Geist, a law professor at the University of Ottawa and expert on Canadian copyright law, has expressed concern that if Canada signs on to the TPP, the newly updated Canadian copyright law would have to be drastically rewritten.

The public is also being locked out of the TPP negotiation process. On September 9, 2012, at the most recent round of negotiations held in Leesburg, Virginia, the public was invited to speak with negotiators and ask questions. Unfortunately, the public groups were not given access to the text on which they were supposed to provide feedback. According to EFF and Techdirt, the negotiators also refused to respond to questions based upon the leaked texts, which are the only versions available to the public.

If ratified, the terms of the TPP could require Congress to change U.S. law, including copyright law. The American public should have the opportunity to give input on any changes to U.S. law. These secret negotiations continue to block public discourse and may cause irreparable harm to the individual use of the Internet.

For a more complete look at the TPP itself, take a look at Public Knowledge’s TPP Info page and EFF’s TPP page. If you would like to express concern about the lack of transparency involved in the TPP negotiations, you can go to the EFF’s Take Action page, or you can sign the petition at Stop the Trap.