The Rare Books and Manuscripts Library is excited to announce that the Chester Himes Collection, 1932-1978 is now available. Chester Himes (1909-1984) was an American author best known for If He Hollers Let Him Go and the Harlem Detective series of novels. Many of Himes’ writings explore racism and the experience of African Americans in the United States. He also wrote essays about civil rights, riots, and the relationship between black communities and law enforcement. The collection contains materials related to Himes’ writings and films adapted from his works that were part of the blaxploitation genre. 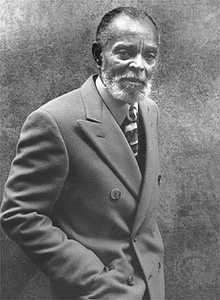 Himes was born in Jefferson City, Missouri. His family later moved to Cleveland, Ohio and Himes attended Ohio State University, but was expelled for playing a prank. In 1928, Himes was arrested for armed robbery and sentenced to jail and hard labor for 20 to 25 years. While in prison, he wrote short stories and had them published in national magazines. Himes’ stories appeared in The Bronzeman in 1931 and began appearing in Esquire in 1934. In 1936, Himes was released from prison on parole. After his release, he worked part-time jobs and continued to write.

In the 1940s, Himes spent time in Los Angeles working as a screenwriter and writing two novels, If He Hollers Let Him Go and The Lonely Crusade. Both of these books dealt with the experiences of African American migrant workers. During this time, he also provided analysis of the Zoot Suit Riots for The Crisis, the magazine of the NAACP.

In the 1950s, Himes decided to settle permanently in France, where he met his second wife and was part of literary and political circles. In 1958, Himes won France’s Grand Prix de Littérature Policière.

Four of Himes’ novels were made into movies, including the 1970 blaxploitation film Cotton Comes to Harlem, directed by Ossie Davis. Himes originally wrote the script for the film, but ultimately his script was not used.

The Chester Himes Collection is arranged chronologically and contains materials dating from the author’s career between the years of 1932 and 1978. It includes speech transcripts, screenplays, publicity, correspondence, photographs, and critiques of Himes’ works. Among the screenplays in the collection are those for Baby Sister, Night Hunt, and Cotton Comes to Harlem. To learn more, please visit the Chester Himes Collection finding aid.

The new year brings the happy addition of Kapil Vasudev to Thompson Library Special Collections as the Mary P. Key Resident for Cultural Diversity Inquiry. Kapil comes to us from Davidson College in North Carolina where, as a Library Collections Assistant, he facilitated the acquisition, description, and preservation of library collections, including the processing of oral histories of the African American community in North Mecklenburg County. In his previous roles at the Charlotte Mecklenburg Library, he worked with diverse communities and participated in a system-wide effort to increase cultural inclusivity of library programs. He was a teaching assistant for North Carolina State University’s Department of History, and earned his MLIS at the University of North Carolina at Greensboro. Working as part of the Thompson Special Collections team with Rare Books and Manuscripts, the Jerome Lawrence and Robert E. Lee Theatre Research Institute, and the Hilandar Research Library, Kapil will connect our distinctive collections to curricular opportunities where special collections can enlighten and inspire a deep understanding of diversity.

OSU Libraries’ two-year Mary P. Key Diversity Residency Program provides professional development and mentorship for a successful transition from academic training to research librarianship, provides hands-on exposure in many areas of the University Libraries, and contributes to advancing diversity initiatives for both the academic librarianship profession and The Ohio State University Libraries.  Before retiring from the Agriculture Library in 1998, Mary P. Key served as the first chair of the Libraries’ Diversity and Inclusion Committee, which has served an important role in advising our diversity residency program. She was the second African American librarian to head a department at the OSU Libraries.