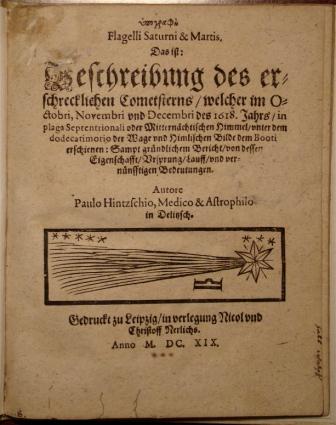 Savants throughout history (along with a fair number of quacks and hucksters) have interpreted comets streaking across the sky as heralds of doom or harbingers of great change. Perhaps had we here at OSU’s Rare Books Library been wearing our divinators’ hats earlier this month we would have associated the arrival on our doorstep of an extremely rare seventeenth-century book about comets with the current world financial crisis (doom indeed?) or the imminent 2008 Presidential election (great change?). Prophets and soothsayers we are not, however, and the book that sped through the ether from New York to Columbus (courtesy of FedEx—one of the Prime Mover’s many tertiary subordinates) hopefully heralds no changes other than the influence it might have on the research agendas of scholars interested in historical astronomy. The book in question—Hypographe: Flagelli Saturni & Martis. Das ist: Beschreibung des erschrecklichen Cometsterns, welcher im Octobri, Novembri und Decembri des 1618…, published in Leipzig by N. & C. Nerlich in 1619—is a small quarto volume consisting of 12 leaves of black-letter German text and a woodcut vignette on the title page depicting the comet and its tail. The author, Paul Hintzsch—a German doctor and astronomer, provides modern researchers with a tidy summation of the astrological and astronomical observations of and discussions surrounding the appearance of the “Great Comet of 1618”, also known as “the Angry Star” due to its extremely long tail, reddish hue, and lengthy duration (it was visible to the naked eye for over seven weeks in late 1618 and early 1619, even remaining discernible during the day). Astronomers across Europe commented on the cosmic phenomenon, astrologers everywhere excitedly interpreted its meaning, and doomsayers and pessimists from Scotland to Sicily witnessed portents and prodigies in its fiery tail. Even King James I of England wrote about it, penning a poem that reminded its readers that even if the comet were a celestial sign, it would remain unintelligible to mere mortals:

Vpon an angry starre? When as yee knowe

The Sun must turne to darke, the Moone to

And then t’will bee to late to turne to good.

O bee so happy then whilst time doth last,

As to remember Doomesday is not past:

And misinterpret not with vayne conceyte

Which though it bringe the World some newes

The letter is such as none can it translate:

And for to guesse at God Almighties minde

Therefore I wish the curious man to Keepe

His rash imaginations till hee sleepe…

Perhaps we should all remember the gist of King James’s lines when trying to predict who will be the next President or how the world’s financial ship will right itself. As for me, I’ll limit my “rash imaginations” to dreaming of the books that in future will become part of OSU’s rare book constellation. 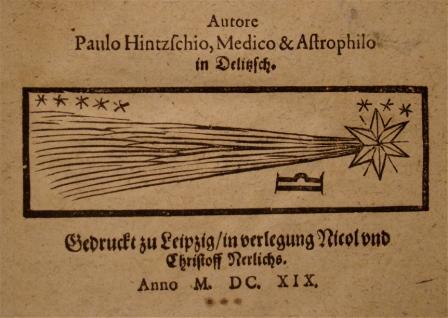 Cranmer, Foxe and the flamboyant Earl of Lonsdale?

Scarring, tears, veins and hair: The imperfections of medieval parchment
Logging In...