The Ohio State/Michigan football game on November 25, 1950 is known as the Snow Bowl, for obvious reasons.  As explained in the alumni magazine, Ohio State University Monthly:

“The game was played in the teeth of a full-scale blizzard, five inches of snow on the ground and snow whistling through the air, borne on a 29-mile-per-hour gale.  Despite the fact it was the worst blizzard in 37 years in Columbus, the Ohio capital easily defended its title as the football craziest town in the nation.  A total of 50,503 persons braved the elements, staying below deck, under the Stadium, until just a few minutes before the kickoff.” 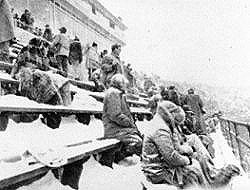 Because of the large crowd, and the mess it would have created to refund the tickets, Ohio State Athletic Director Dick Larkins, after conferring with both Michigan and Big Ten officials, decided to play the game.  The game had bearing on who would win the conference and go to the Rose Bowl, and had the game not been played on Larkin’s order, the Big Ten title would have been given to Ohio State by default.  Ohio State officials felt that they would never be able to have “lived this down” had that happened.

“The snow, wind, and insecure footing made the game a mockery – an imitation of football only by a stretch of the imagination.  The two teams huffed, puffed, bumped and slid.  Cold hands refused to hang on to the ball.  At the end of 60 minutes of sliding and kicking, Michigan emerged on the long end of a 9-3 count.” 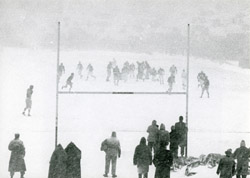 “Volunteers were detailed to special broom duty, keeping the goal lines and the sideline yard-markers swept clean throughout the game.  On several occasions, when there was an official’s time-out to measure for a first down, a special crew of sweepers cleared off the snow to find the line.”

“The strategy of both teams became the same: run a play or two into the line – straight in – and then kick, preferably on third down because if a fumble occurred a fourth down for kicking would be available.”

Ohio State scored first after Bob Momsen recovered a blocked kick and Vic Janowicz kicked a field goal.  Michigan’s first score of the game came from a blocked kick that rolled out of the end zone for a safety.  With 47 seconds remaining in the first half, Michigan’s Tony Momsen (brother of Bob) blocked a punt and fell on it in the end zone for a touchdown and the final score of 9-3.

Vic Janowicz said after the game “It was like a nightmare.  My hands were numb (and blue).  I had no feeling in them and I don’t know how I hung onto the ball.  It was terrible.  You knew what you wanted to do, but you couldn’t do it.”

Image 1: Faithful fans bundled up to keep warm from the frigid temperatures and show their support for both teams.
Image 2: Volunteers stand ready to sweep the goal line throughout the game.