A Walk in Our 'Shoe : the history of Ohio Stadium

A Walk in Our ‘Shoe 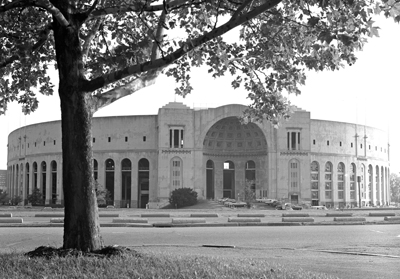 Seen alternately as a building no one thought OSU football games could fill and an engineering marvel comparable to the Coliseum of Rome, Ohio Stadium has reflected the changing ambitions and enthusiasms of the Ohio State community and the nation at large. Completed in 1922, built in little over a year for a little more than $1 million, the Stadium was to unite students and fans in displays of wholesome athleticism. After countless renovations and repairs – including a student dorm, three generations of artificial grass, and five press boxes – the building has become a physical support for a contemporary media experience. Throughout its history, the Stadium has accommodated social, economic and technological change, and remains the spot where fans gather together to show their devotion to OSU.