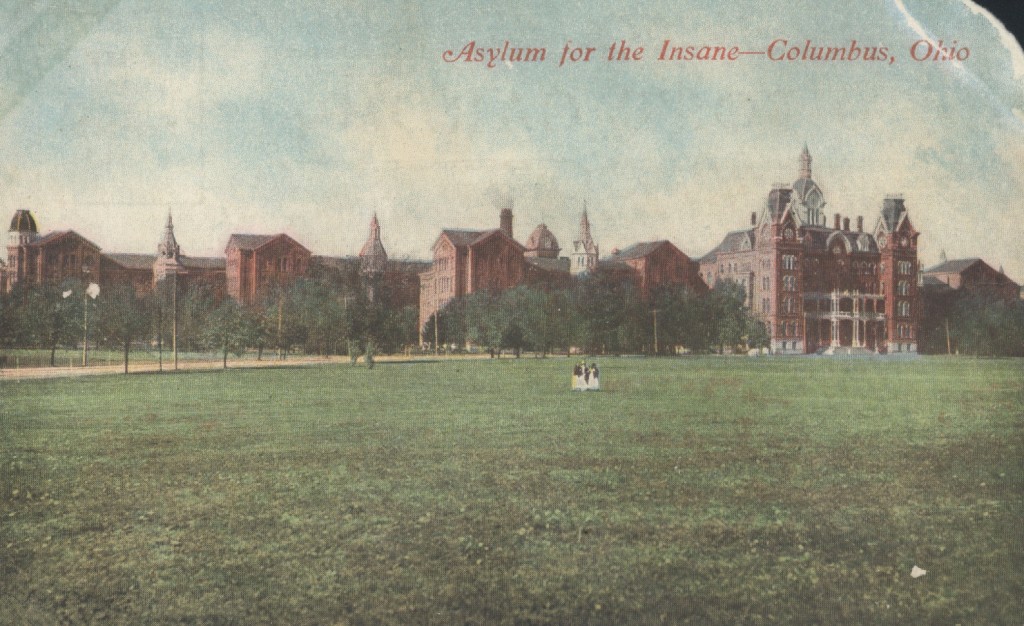 The following is a summary about the Institution from Hilltop: A Hospital and a Sanctuary for Healing, its Past and its Future by George W. Paulson, MD and Marion E. Sherman, MD. Copies of this book are available for purchase from NAMI Ohio for $15 each at amiohio@amiohio.org or 1-800-686-2646.

By 1838 William Awl, MD persuaded the legislature to build the first state-supported hospital in Ohio. It was called the Ohio Lunatic Asylum and was designed solely to treat the mentally ill. It was located one mile from the capitol on 35 acres, north of East Broad Street. It was bordered on the east by Parsons Avenue, an avenue named for one of the early directors of the Asylum, Samuel Parsons. In contrast to similar medical units in New York and Philadelphia, payment was not a criterion for admission.

Built with convict labor, the Waverly marble-coated building housed as many as 328 patients by 1850. It burned down in 1868, with the loss of six patients and displacement of 314 others. Rebuilding began at the same site, but following the urging by then-Governor Rutherford B. Hayes the land on East Broad Street was sold for $25,000 and a new hospital was built on the hill to the west of the capitol. The new hospital, dedicated by Hayes in 1870, embodied the famous Kirkbride design, intended as a “moral architecture” to match the contemporary dream of “moral therapy.” The facility was originally designed to house up to 800 patients, with most living in private rooms. The building housed 1,350 patients by 1900 and by 1935 was home to 2,932 patients. It became an almost self-supporting campus where the patients worked, walked the grounds, or just “set” waiting to live out their days in the slowly decaying hospital. Many patients were sheltered for decades in the hospital, and in any one year, over 100 patients might have died.

They received whatever was considered the best therapy at the time, including the administration of over 100 lobotomies in the 1950s, and 14,275 individual electroconvulsive therapies in 1955. The patients were protected while they were confined. Since poor, elderly, frail, and helpless persons were particularly likely to need admission, some patients received adequate basic medical care for the first time in their lives. Among the active members of the staff were respected doctors in private practice as well as academic physicians. Many of the full-time staff lived on the grounds with their families.

In addition to the education of residents, students, nurses, and chaplains, other accomplishments deserve to be remembered. Probably no other state hospital had three superintendents who went on to become president of the American Psychiatric Association. Dr. Awl was a founder of the Association. Another staff member, Samuel M. Smith, MD, never held the position of superintendent, but became the first Professor of Psychiatry in America. He was twice chosen as the Dean of Medicine at Starling Medical College and was the Surgeon General of Ohio during the Civil War.

Lithium was first approved as a therapy for use in Ohio at Hilltop. The concept of the limbic system was propounded at the state hospital by one of its several excellent pathologists. For many years 90% of all psychiatric care in Columbus was offered at the Hilltop. At least 35,000 patients were treated through the years, and most were returned, improved, back into the community.

Deinstitutionalization was a major trend in psychiatric care in the last half of the twentieth century. It meant both the demolition of the large state hospitals and the release of the patients back into the public sector. The old Kirkbride hospital was torn down in the 1980s and early 1990s.

Is there still a presence on that ridge where so much delivery of humane care once occurred? Indeed there is. In 2006 over 1,000 patients, now referred to as “clients,” were admitted to the 175 beds in the combined civil and forensic units called Kosar, and another 82 persons were referred to the forensic prison unit on the same grounds. For non-forensic clients the stay tends to be 14 days or less, and frequent readmission (also known as recidivism) is a major concern. Once there were over 800 aged patients at Hilltop, at Kosar now less than 3% are over 65.