Come join us in an upcoming webinar on the “Journey along the Tōkaidō,” a set of engaging online K-12 teaching resources highlighting Japanese art, history, and geography. Entitled “PICTURE THIS: Traveling Through Time with Japanese Art and Manga,” the event, slated for October 10, 2020, is open to teachers and administrators from any state. Participants will discover new ways to engage students in this exploration of Japan’s most important trade route, the Eastern Sea Route (the Tōkaidō) with a special focus on the rare Tōkaidō manga scrolls, housed at the Billy Ireland Cartoon Library and Museum (BICLM).  The historic Tōkaidō Road once connected the political capital of Edo (present-day Tokyo) to the former imperial capital of Kyoto during the Tokugawa era (1603-1868).  Suitable for remote and in-person teaching, the lessons of the “Journey along the Tōkaidō” emphasize change over time while comparing global cultures through the lenses of art and manga from Early Modern and Modern Japan (ca. 1800s to 1930s). 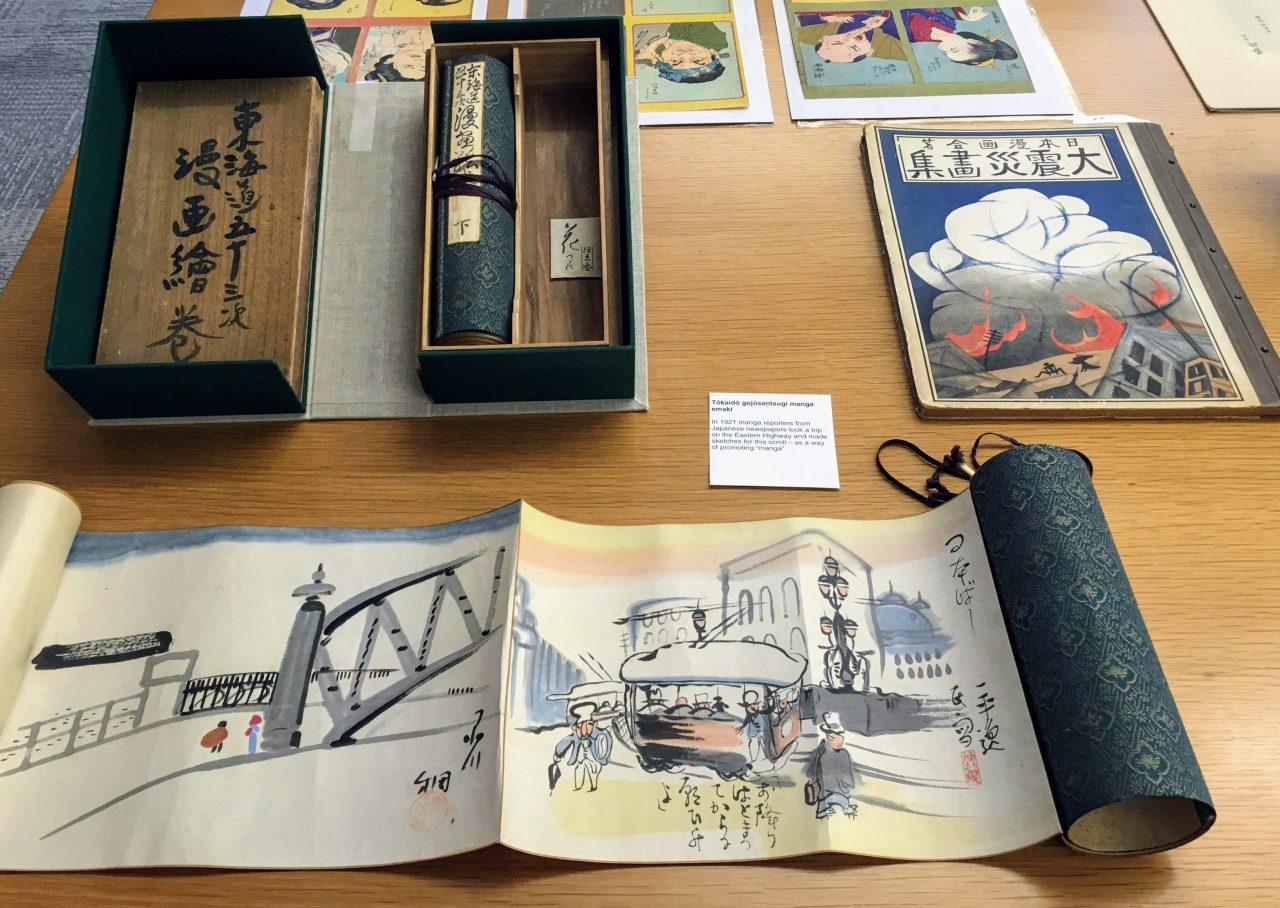 In the image above, the Tōkaidō manga scrolls are on display at a recent open house. The bottom half of the image shows the first two watercolors of scroll number one (上): Nihonbashi and Shinjuku Stations. In the upper left corner is the second scroll (下), nesting in its wooden containing box. To the right of the box is a rare picture book of the Great Kantō Earthquake (1923), also created by the Tokyo Manga Association.

Formally titled “Tōkaidō gojūsantsugi manga emaki,” the Tōkaidō manga scrolls were hand painted by 18 members of the Tokyo Manga Association around 1921. Their unique visual depictions of the various sites along the Tōkaidō offered a compelling interpretation of pre-war manga vis-à-vis The 53 stations along the Tōkaidō (Tōkaidō Gojūsan-tsugi), a set of iconic woodblock prints created roughly a century earlier by artist Andō Hiroshige (1797-1858). The group of artists was led by Okamoto Ippei, one of the most popular manga artists of his time, on a journey by automobile stopping at each of the Tōkaidō’s stations. The manga artists hoped to raise the social standing of their craft by indirectly comparing their work to that of venerated woodblock printmakers of the past. Although the style of the scrolls’ watercolors differs considerably from what one might recognize as a “manga” today, the artists’ quick, spontaneous work somewhere on the edge of caricature was an undeniably important steppingstone toward the popular, modern manga style. Prominent artists in the pre-war era, many of the members of the Tokyo Manga Association contributed topical drawings to urban newspapers and taught others about cartooning.

In addition to the Tōkaidō manga scrolls, the Tokyo Manga Association created a number of unique materials, some of which are held at BICLM.  In the upper right  corner of the photograph above, for instance, is the book Daishinsai gashū (大震災画集, “Picture Collection of the Great Earthquake”), published in 1923.

For a more thorough background on this unique piece,

Led by Angie Stokes, art teacher at Wayne Trace Junior/Senior High School in Haviland, Ohio, and Ann Marie Davis, Japanese Studies Librarian at OSU, the event was held on Saturday, October 10 (1:00-3:00PM) and coordinated by the East Asian Studies Center (EASC).  Angie Stokes discussed various aspects of the Journey Along the Tōkaidō curriculum, focusing on lessons she has used in her own junior high and high school classrooms. Ann Marie Davis provided a virtual tour of OSU’s manga collection and the Billy Ireland Cartoon Library and Museum, with a special focus on the Tōkaidō Manga scrolls and related treasures.

Webinar Slides and other Resources: