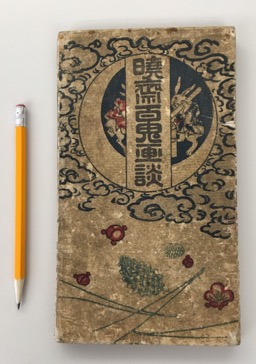 Kyōsai was a colorful figure in the Japanese art world active between the culturally rich Edo period (1603-1868) and the tumultuously transitional Meiji period (1868-1912). A child prodigy, Kyōsai joined the Kano school (狩野派) of painting at the age of ten and earned the nickname “the demon of painting” from his teacher. Kyōsai’s two loves were Edo-period traditions and sake, which gained him an infamous reputation among the firebrand elite of early Imperial Japan, whom he often satirized. 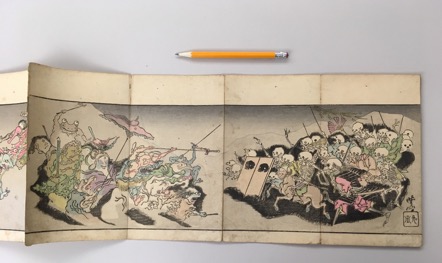 In part because of his considerable skill in caricature, which helped him use humor to comment on the society he lived within, and his masterful grasp of action and energy in a still image, some scholars consider Kyōsai to be one of the earliest manga artists (Arn, 2018). Although scorned by the powerful, he was a popular creator with widespread appeal. There is no lack of storytelling in Kyōsai’s many crowded scenes as well–obsessively detailed with whimsical characters like alcohol-fueled illustrations from the book Where’s Waldo? 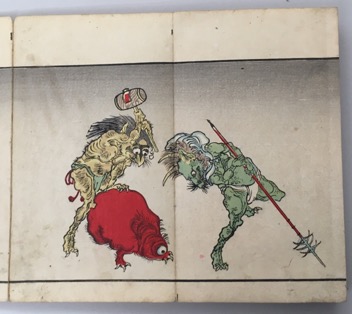 Whether you’re excited by Japanese art history or just by creepy paintings of strange ghouls, have a look at some of the materials about Kyōsai and other Meiji artists that you can find at OSU Libraries. While many of our materials circulate, this special piece will be stored with other distinctive materials at the Billy Ireland Comics Library and Museum.

An article about Kyōsai’s artistic life and relationship with manga can be found here:

Catalogues and exhibitions of Kyōsai and other Japanese Woodblock Artists:

A Descriptive Catalogue of an Exhibition of Japanese Landscape, Bird, and Flower Prints, and Surimono from Hokusai to Kyōsai by Louis V. Ledoux (New York: The Grolier Club, 1924)

Art and culture in Meiji Japan: