As Japan was recovering from World War II, Sōhachi Kimura (木村荘八), Yoshikazu Suzuki (鈴木芳一), and several others, set out to document the history and architecture of the Ginza district in Tokyo. The finished project, Ginza Kaiwai (銀座界隈), contains two separate volumes. The main volume has detailed text, illustrations, drawings, woodblock prints, and hand-drawn maps of the entire district. The supplement, Arubamu, Ginza Hatchō (アルバム・銀座八丁) by Suzuki, is a panoramic photo, folded in leporello style, documenting the length of the main boulevard Ginza-dori.

The bookset Ginza Kaiwai/Arubamu, Ginza Hatchō was recently acquired by the Herman J. Albrecht Library of Historical Architecture, which is housed in the Thompson Library’s Rare Books and Manuscripts Library (RBML). 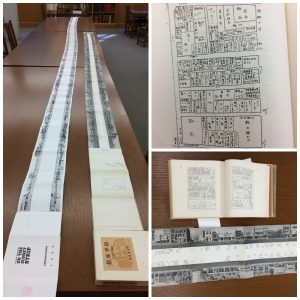 Consisting of 200 photographs taken in similar weather and light conditions, Suzuki’s photo project lasted from November 1953 until spring of the next year. The process of photomontage was used to add cars between Ginza 4-chome (西四丁目) and 5-chome (西五丁目) and pedestrians at 5-chome, in front of the famous retail store Kyūkyodō (鳩居堂). (For more information, see the blog article Ginza Kaiwai. Ginza Haccho. Tokyo: Toho-shobo by Guy-Bernard).

Twelve years after the original project was published, the American artist Ed Ruscha published a similar panoramic photograph of the Sunset Strip in Los Angeles titled Every Building on the Sunset Strip (available at RBML). For further reading that compares Ginza Kaiwai to Ruscha’s work, see:

In the early- to mid-20th century, the Ginza district suffered significant damage following a major earthquake in 1923 and firebombings during World War II. The list of different store names under each building in the Suzuki’s photomontage shows the extent to which the district changed until the early 1950s, following the US-Occupation of Japan.

Apart from reconstruction efforts to repair damages, the buildings in the area were often renovated due to the district’s popularity as a shopping area. One of the examples is the Matsuya Department Ginza Flagship Store (松屋銀座) between Higashi 2-chome (東二丁目) and Higashi 3-chome (東三丁目). Taken in different years, the following photos show some of the major architectural changes: