Asadoya Yunta (安里ユンタ or 安里屋節) is one of the most widely performed Okinawan songs in recent music history.  The song originated from Taketomi Island in the Yaeyama district of Okinawa, Japan. It tells the tale of a young and beautiful peasant woman named Kuyama Asato (安里クヤマ) and the advances of a government official. The version wide-spread in Okinawa has Kuyama refusing the official as she felt the stability offered by marrying a local man was better than the luxurious but short-lived lifestyle of a mistress. However, in the Taketomi Island version, Kuyama ended up becoming the official’s mistress.

The song went through several adaptations. In 1934, Nippon Columbia decided to record songs from Okinawa. Apart from traditional songs performed in local dialects, the company also wanted to record Okinawan songs in standard Japanese so people all over Japan can understand them. As a result, a local poet, Katsu Hoshi (星克 or pseudonym 星迷鳥) was commissioned to write new lyrics for Asato Yunta in standard Japanese. The new lyrics were more of a love song instead of the story of Kuyama Asadoya. In addition to new lyrics, Chōhō Miyara (宮良長包), a music teacher from the local school, re-arranged and modernized the melody, and this new version was sometimes called Shin Asadoya Yunta (新安里屋ユンタ). Most of the more recent performances of Asadoya Yunta by pop singers such as Rimi Natsukawa and Ryuichi Sakamoto are actually lyrics of the modernized Asadoya Yunta. 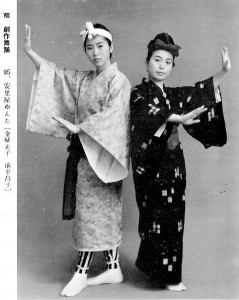 Columbia’s recording launched Asadoya Yunta into popularity all over Japan. It was again reinterpreted in 1944 into a war song. Due to the song’s popularity, a folk dance was choreographed to the melody after World War II.

OSUL has several resources in English and in Japanese on Asadoya Yunta:

NOTE: This is one of a series of posts highlighting content available in Rekion (れきおん), the Historical recordings collection of the National Diet Library (Japan), which is available at a dedicated computer in the Music and Dance Library at Ohio State.  See the Introductory post in this series for more information about the database.