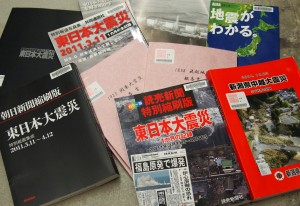 Last month the world observed the first anniversary of the devastating earthquake and tsunami on March 11, 2011. As time passes since the Great East Japan Earthquake (2011 Tōhoku earthquake and tsunami) some important and interesting records of this event are being added to the collection to support research. The National Diet Library has generously sent us some materials as part of their gift and exchange program, including in-depth studies of previous earthquakes and tsunamis in Japanese history. Recently I have also started to collect creative writings, such as poetry, fiction and literary essays, as well as personal accounts of those who survived.

Japanese Book News No. 71 (Japan Foundation) includes an article by Numano Mitsuyoshi, “Japanese Literature in the Post-3/11 Era: Is the “Future’s Door” About to Open?” which introduces some notable writings by:

To find resources at Ohio State on this topic, use these subject headings:

We also have works on other earthquakes in Japanese history under various headings, including: