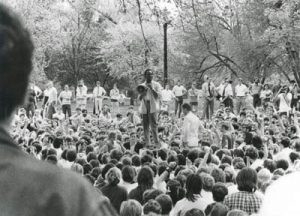 Demonstrations were nothing new on campus. Over the years, crowds had marched in protest over a wide range of issues, from rules that governed which speakers were invited to OSU, to faculty votes against sending the football team to the Rose Bowl.

Still, there had never been such a long and divisive period on campus. In April 1968, 41 African-American students marched into the Administration Building (now Bricker Hall), locked themselves in, and presented administrators a list of demands for racial justice. Three years later, many of the same tactics were being used and not just at OSU. At many colleges throughout the nation during this period, students were demanding drastic changes on economic, racial and social issues, as well as an end to the Vietnam War. In the spring of 1970 alone, there were demonstrations staged at 760 campuses across the country – about a third of all higher-education institutions in the nation.