Seeing National Guard vehicles riding around the Oval was scary as they were carrying guns. After Kent State, no one was sure if guns were loaded, and if so, with what. [read more]  –Anonymous Student

Demand for change leads to unrest 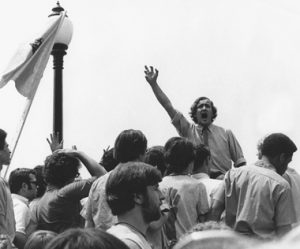 In May 1970, The Ohio State University shut its doors for nearly two weeks – the longest period the Columbus campus had ever been off-limits to students and staff. For much of that spring, large and sometimes unruly crowds had been demonstrating over a number of issues, ranging from the Vietnam War to racial and gender inequality. Various student groups had joined together to prompt the administration into taking action on certain demands related to these issues. As the spring quarter wore on, however, little progress had been made, and the number of demonstrators marching across campus rose. Clashes between protesters and police – and eventually the National Guard – grew more heated.

After four students were killed during a May 4 demonstration at Kent State University, OSU administrators decided to prevent a similar scenario by clearing out the campus. The University officially closed on May 7 and reopened May 19, less than a month before finals week. For the most part, the strategy worked: After the campus reopened, there were fewer demonstrators, and the rallies were less contentious. Meanwhile, the talks between student and administrators resumed, with progress eventually made on a number of the students’ demands.

In the end, the physical effects of the demonstrations – injuries to participants or bystanders, destruction to campus property – were temporary, but the cultural impact on the University from that spring of dissent was far reaching and still resonates today.