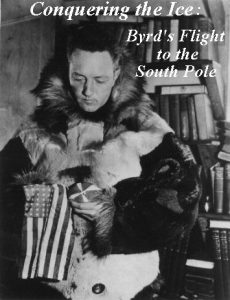 On November 29, 1929, Richard E. Byrd made his historical flight over the South Pole. This was the first time that flight over the Pole had been attempted, and up to this point in time, only two parties had ever reached the South Pole and only one survived the trip back. But Byrd was buoyed from his successes of the North Pole Flight in 1926 and his Transatlantic Flight in 1927. Antarctica was the next logical achievement. Byrd consulted with Roald Amundsen, his former rival for the North Pole and the first to achieve the South Pole on foot. Amundsen gave sound advice: take a good plane, take plenty of dogs, and only the best men. Indeed, Byrd took his advice, and then some. This was to be the largest and the costliest expedition in the history of the exploration of Antarctica to that time, with costs ultimately reaching more than 1 million dollars. Richard Byrd proved himself as the ultimate organizer, publicist and leader.

Byrd outlined three major goals for this expedition, the first of five trips that he would eventually make to Antarctica. The first goal was to add to the scientific knowledge of Antarctica, especially in areas of meteorology, as well as geography, geology and geomagnetism. A second goal was to explore the interior of Antarctica, especially areas around Amundsen’s route to the South Pole. The third goal and certainly the most daring, was to fly over the South Pole. In the thirteen months spent on the Antarctic continent, the Byrd expedition accomplished all of its objectives, and more.