Student post: How Comics and Zines Influenced my Art Practice

April 28, 2020 / Caitlin McGurk / Comments Off on Student post: How Comics and Zines Influenced my Art Practice

Bio: Chucen Chen is an undergraduate student from China, majoring in printmaking at The Ohio State University. She will graduate in May of 2020, and will be pursuing an MFA from Florida State University in the fall. During her final semester at Ohio State, Chucen interned at the Billy Ireland Cartoon Library & Museum, where she processed minicomics and zines in our Dylan Williams Collection. 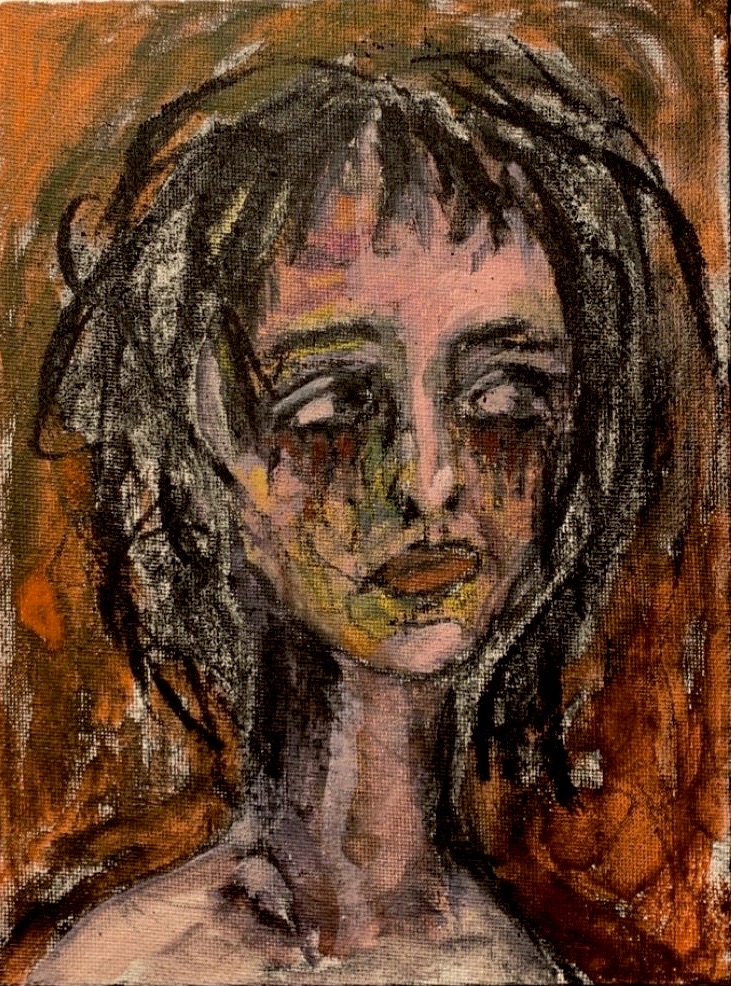 I have heard people define my art style as edgy, emotional, honest, refreshing, junky with some rock music elements. A common question for artists is, “which artists or art movements inspire you the most?” As a part of the academy, grandly, Egon Schiele and Dadaism always come up for me. However, ever since I started working at The Billy Ireland Cartoon Library & Museum, it brought back memories of my enthusiasm for comics and zines at the beginning of my artmaking. My dad used to be concerned about my decision to be an artist, “you have never been trained professionally.” I would argue with him that I started imitating drawings from Japanese Manga and creating comic zines when I was little, and that was a practice of art. To me, comic elements are not something I intentionally use in my works, but a subconsciousness in my mind because of my long comics experience. 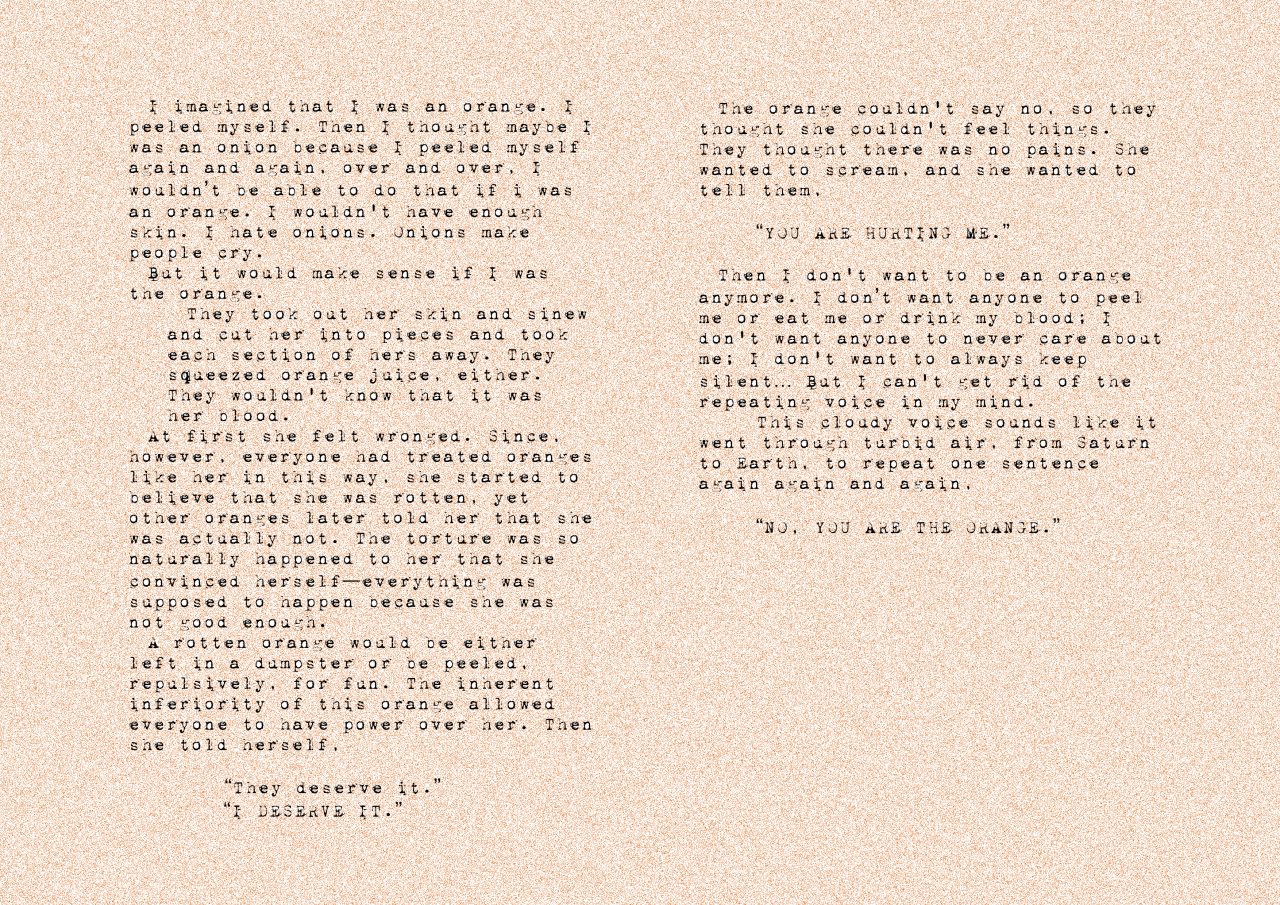 A very typical look of the characters in my works is that they all have vacant-looking eyes, fuzzy hair, and messy, heavy eye-makeup, stated in backgrounds mostly with the colors of black and red (Fig.1, Fig.2, Fig.5). Nana Osaki, one of the main characters in manga Nana (Fig.4), is one of the most influential characters in my essential graphic elements. Besides Nana’s grungy outfit as the vocalist of an underground rock band, the intense personality of hers is also relatable to the pathologic disintegration in my art. Her extreme loyalty to her friends and her lover, Ren, brings a sense of warmness to this cool—sometimes intimidating—character, while being mentally ill somehow gives the viewer an answer to her craziness of love in various senses. I bring that intensity and craziness to my work. However, instead of the straight expressive extreme—like directly asking her lover if he would die with her, I use metaphorical narratives in my written pieces, which is behind a bipolar cycle of self-assurance and self-doubting. For example, in my painting Nothing was Real; It was Just An Orange (Fig.3) and A Poem (Fig.6), the silly metaphor interprets both the color of orange and the orange as fruit, and the psychological violence behind peeling an orange becomes a narrative of the memory of being in a not-that-ok relationship. 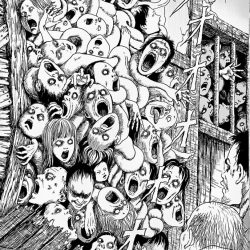 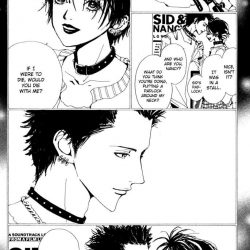 Junji Ito (Fig.7) is another recognizable inspiration in my art. I am drawn to the pathological aesthetic in his work, he uses repeating shapes and lines often to create a sense of horror and dramatization. Instead of involving too many details, I work in a quicker process that requires physical manipulation to complete the expression. In the painting Upside Down (Fig.2), I create the blurring yet dramatic brushstroke and charcoal graphic by applying mediums and scratching the canvas with my bare hands. Similarly, the texture in my monoprint In My Mind (Fig.5) and the series of drawings Childhood (Fig.9, right) comes from touching the surface directly with my fingers. This somehow beautiful and ugly combination has been representing the feeling of loss and the pathological disintegration of the personality in my body of art. 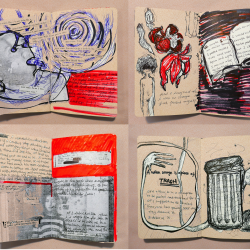 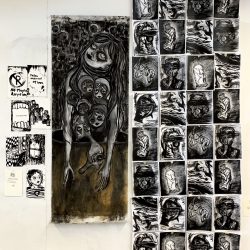 Dōjinshi (Fig.10), generally known as a fan product of manga and anime, helped me get to know and start to make zines. However, 1990s American zines with strong line work and edgy text influenced my style of zines the most. The content in my zines is collected from my sketchbooks and journals, usually printed by silkscreen and xerox printer (Fig.8; Fig.9, left; Fig11; Fig,12 ).

To me, comics culture is not just a format of art for teenagers. It is art that can be used in a movement and accepted by most audiences. Because the size and content are easier to share and understand, comics and zines are an even more powerful tool for spreading information and influencing society. 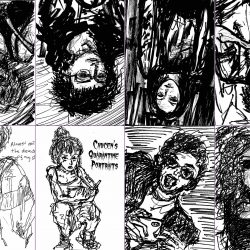 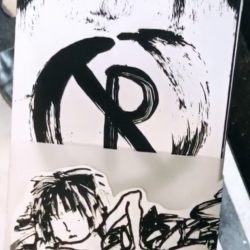