Student post – Vint Lawrence: The Craft Behind the Caricature

Vint Lawrence: The Craft Behind the Caricature
by Olivia Thornberry

Bio: Olivia graduated from The Ohio State University in May 2021 with two Bachelors of Arts degrees in history and political science. She has worked at BICLM since December of 2019.

It isn’t often you see art school and the Central Intelligence Agency together on one person’s resume. James Vinton “Vint” Lawrence graduated from Princeton with a bachelor’s degree in art history before being recruited into the CIA and positioned in Laos during the 1960s Vietnam War. Upon his return home to Washington D.C., an abrupt career change led him to sell his first piece (a caricature of Philip Roth) to The Washington Post in 1969. Lawrence then went on to master portrait-style caricature in his years of creating political cartoons and contributing to popular news sources such as The New Republic, The Washington Post, Foreign Policy, Washington Book World, and Washington Monthly. [1]

I have had the pleasure to work very closely with Vint Lawrence’s art since more than 1,000 pieces joined the Billy Ireland Cartoon Library and Museum catalogue back in 2019. From the very beginning of the collection, Lawrence’s unique humor becomes indicative of his intelligent artistic style. He is perhaps best known for the witty and subtle visual jokes spread throughout his pieces, which exemplify the talent and cleverness rooted in the breadth of his art. Lawrence’s humorous iconography builds inside jokes with its viewers, connecting them more firmly with the accompanying reading. In his caricature work, Lawrence did not rely on ballooned features but rather opted to utilize a delicate overemphasis in conjunction with visual jokes to make his characters more recognizable. In this way, his work often feels like legitimate portraiture, as the slight exaggeration of physical features often outweighs in purpose of identification rather than in purpose of strict comedic effect. Washington Post art critic Paul Richard perhaps characterizes Lawrence’s work best, saying:

“He does not burlesque his subjects. He shapes their faces into symbolic objects that illuminate the news.” [2]

Lawrence’s political contributions are also unique in that they are not rage-centered partisan jabs, but rather more nuanced critiques of Washington regardless of political identity. His cartoons therefore find success in the shared camaraderie of criticizing governmental insincerity through crafty humor. All these features of Vint Lawrence’s art developed differently over the course of his career, and it is curious to observe such developments throughout his recreations of same, or similar, characters. 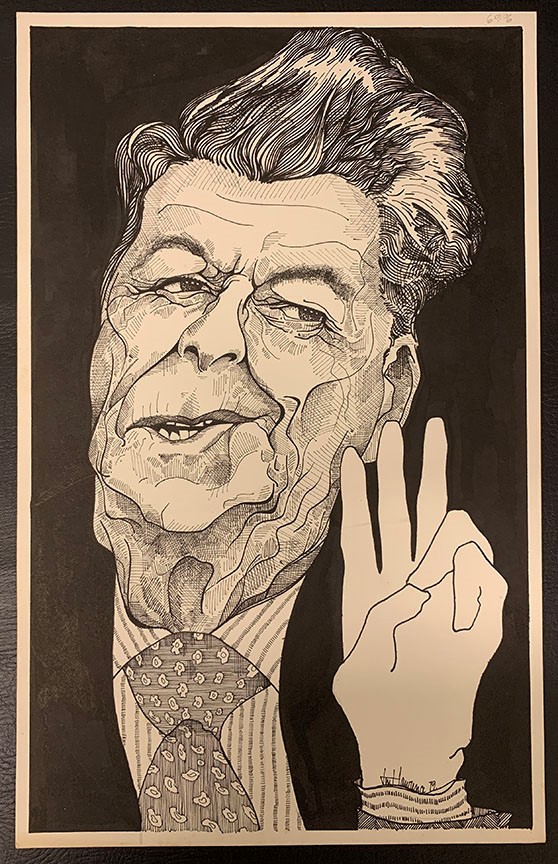 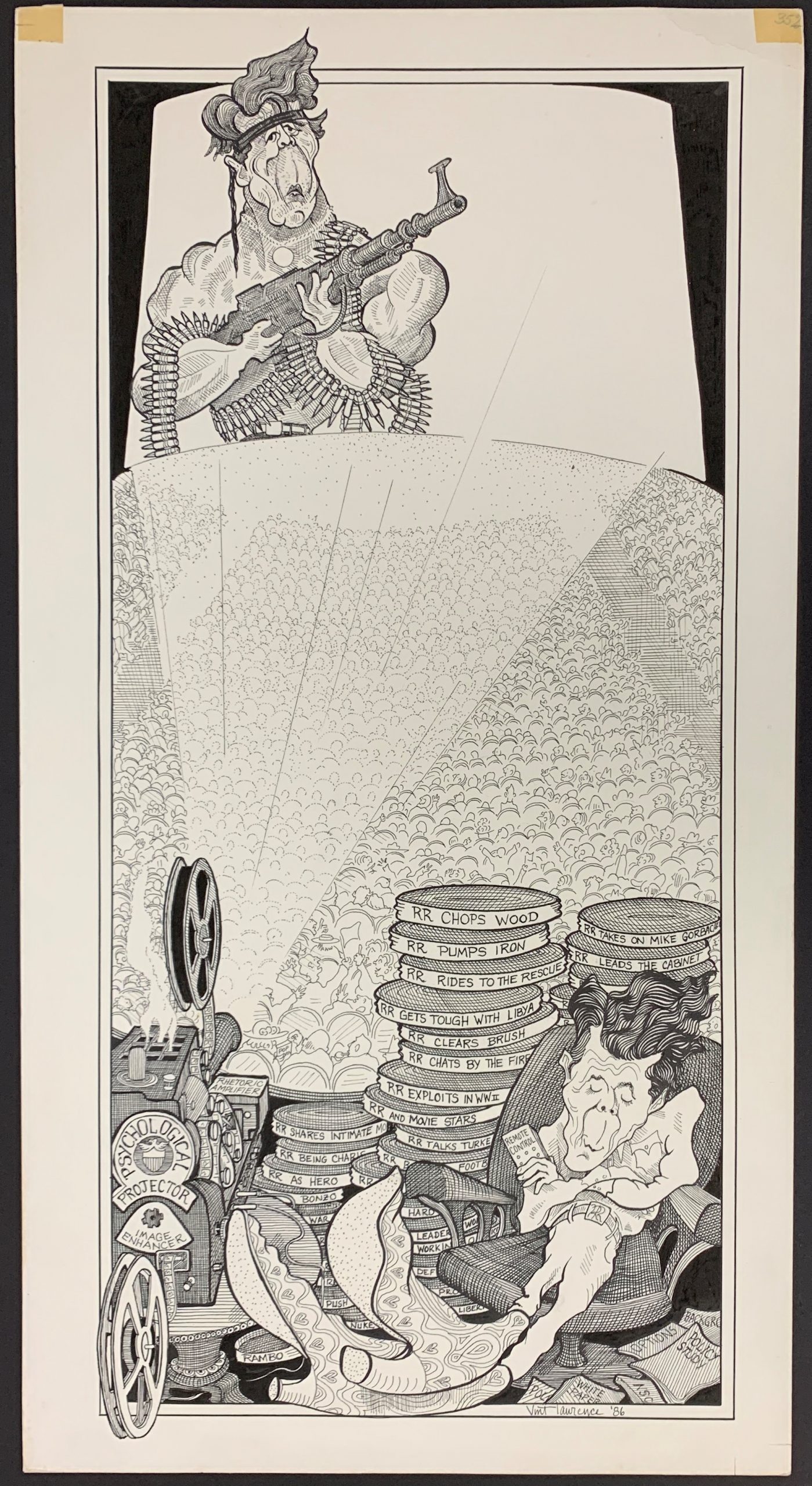 Consider, for example, these two depictions of former President Ronald Reagan. With the first created in 1979 and the second created in 1986, seven years differentiate these pieces. More than time separates them, however, as style and context do as well. Reagan himself saw great life changes between these years— from the presidential campaign in 1979 to the midst of his second term as leader of the free world in 1986. Vint Lawrence does have consistency in critical identification areas as he maintains the meticulous lines of Reagan’s wrinkles and “Hollywood hair.” However, Reagan’s status as a political leader clearly shifted with time, and this change is reflected back through art. The first is demonstrative of caricature portraiture; no one could mistake its modest amplification of Reagan’s facial contours and lifted hair for anyone else, yet it does not rely on such amplifications for comedy. The second is quite the opposite as it imagines Reagan as Rambo, poking fun at the President’s former status as an actor. The piece is quite intricate with its incorporation of the previously mentioned visual jokes. These changes may indicate a more critical understanding of Reagan’s leadership, and certainly a more humorous one.

Perhaps these two are more broadly communicative of Reagan’s presidency, or perhaps they are simply reflecting the stance of their accompanying publications. Perhaps the two motivations are not mutually exclusive. Either way, it is clear the depth and significance of Vint Lawrence’s work extends beyond his incredible talent for visual appeal. Although Lawrence unfortunately passed in 2016, his art will continue to serve as long-standing archetypes on the form of a proper political cartoon. In fact, it might just do the world some good to reflect back on his work and get a laugh.