As iconic and cherished as Lambeau Field or the Pabst Theater, for the people of Milwaukee, Wisconsin the Green Sheet wasn’t just another four page section in The Milwaukee Journal, but a beloved part of the culture in this working-class city. I was only an infant when the green sheet was discontinued, so when my family began reminiscing about their childhood memories surrounding the Green Sheet I felt envious that I was missing out on a large part of my Wisconsin upbringing. From my father’s family from Waukesha to my mother’s from Beaver Dam, everyone seemed to have a story or at the very least a smile from the thought of their childhood Green Sheet. I had to interrupt their passionate (and loud) conversation to ask “What is a Green Sheet?” They stopped only to say that it had comics, short stories and things like that.

They told me stories about stealing the newspaper before someone else got it to read it first and how it helped many of them learn to read with the help of comic strips like “Nancy” or “Li’I Abner”. My millennial self couldn’t wrap my head around the frenzy surrounding this allegedly unique comic section, but with this new curiosity about my home state I decided to research this unknown comic gem when I returned to work at the Billy Ireland the following week.

Not knowing what to expect when I opened this giant, flat box on one of the reading room tables, I was surprised to discover the Green Sheets were not so green anymore! The barely noticeable green tint in the center of the large newssheet slowly faded to a colorless beige on the old, worn out edges of the page. But as I flipped through the stack of delicate papers, I realized that there was something unique about them, but I couldn’t quite figure out what. So I began my dive into the Green Sheet’s long history in The Milwaukee Journal. 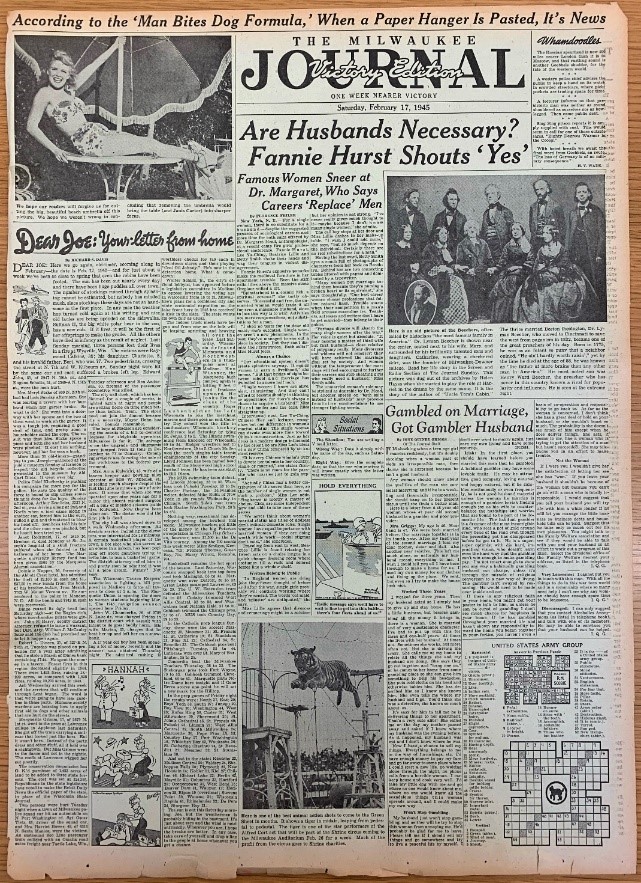 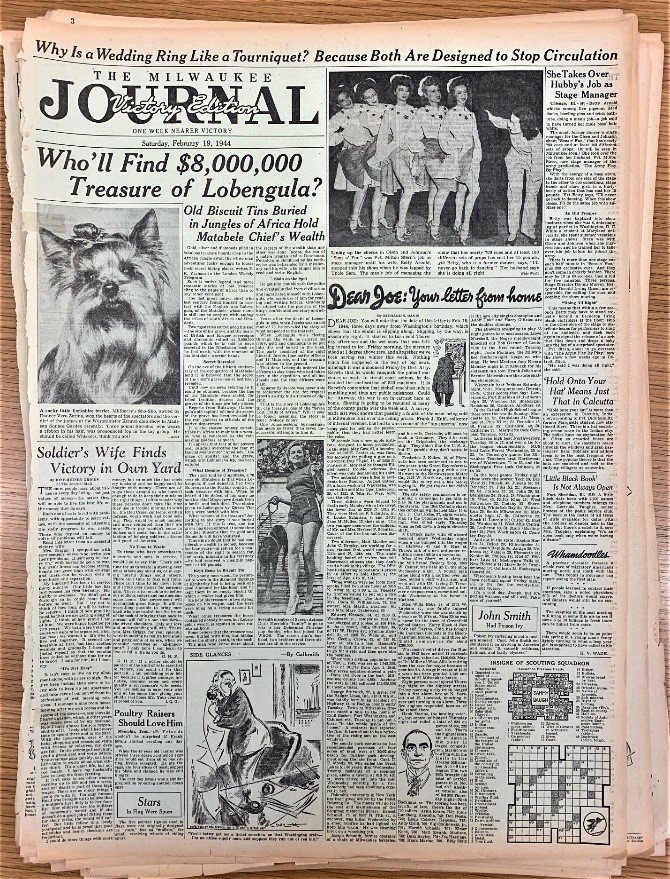 The first Green Sheet was published around 1913 starting as a sports section in The Milwaukee Journal during WWI until it was revived in the 1920s with more sensationalized stories. These tabloid news stories were seen to be inappropriate for women and children so it was sold on the street instead of being delivered directly to the homes of Wisconsin residents. But around 1927 the Green Sheet’s new editor Larry Lawrence began reconstructing it into its recognizable form that it would retain for the next 60 years. It contained not only comics but puzzles, serials, human interest stories, pop culture, articles on outrageous crimes, and political commentary. 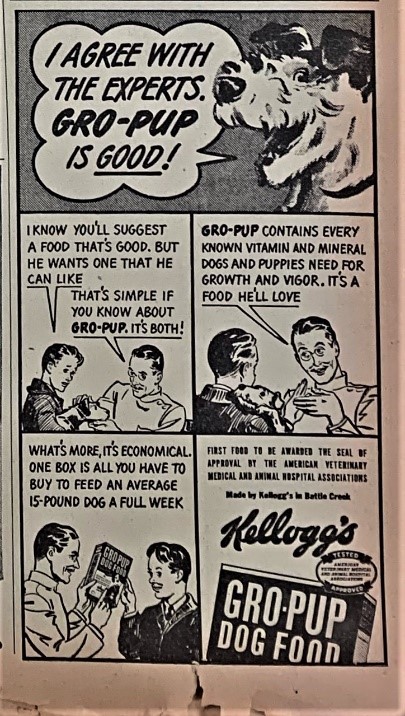 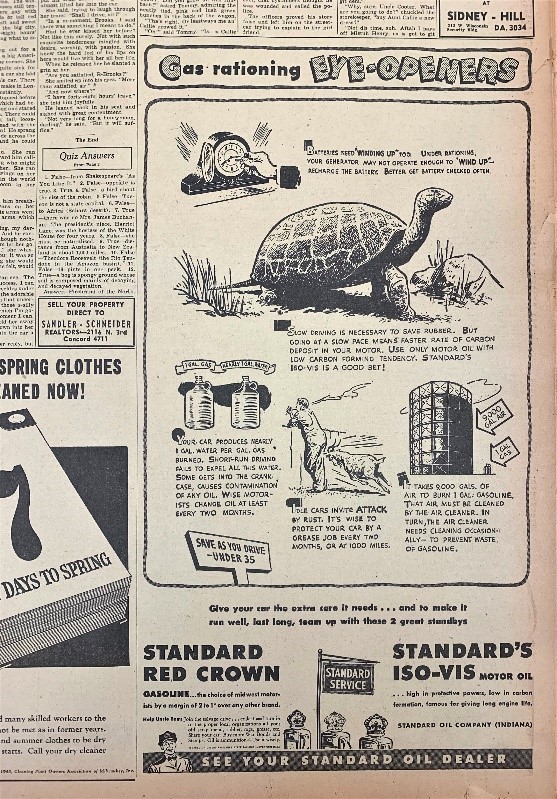 The Green Sheet created the platform for iconic writers such as Ione Quinby Griggs, whose popular advice column “Dear Mrs. Griggs” empowered women in working-class Milwaukee in gendered issues pertaining to marriage, dating, and adolescence. Before advice columns like “Ann Landers” and “Dear Abby”, this “girl reporter” of the roaring 20’s in Chicago found her way to Milwaukee where she wrote for the Green Sheet from the 1930s to the 1980s. In this edition of “Dear Mrs. Griggs,” she offers advice for a teenage girl, “The girl who never learns to say “No,” who hasn’t the courage to refuse anything that is asked of her is handicapped and weaponless as she moves through life.”
“Girls Learn Value of Important Word No” The Milwaukee Journal, 14 Apr. 1943, p. 3. 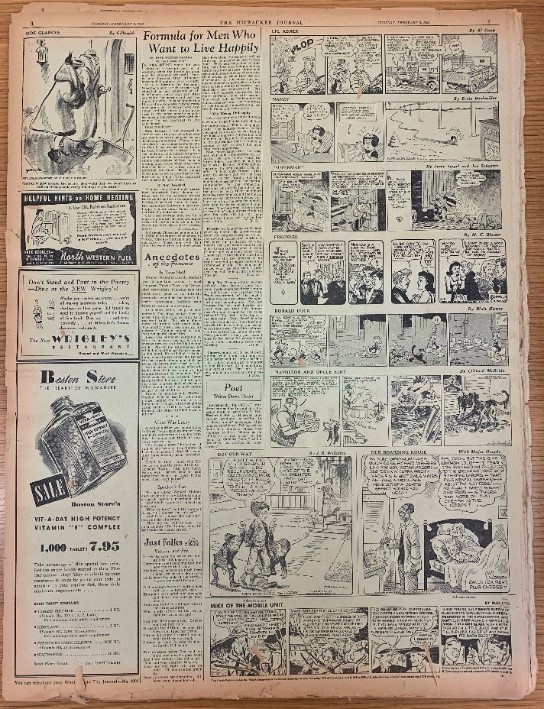 Griggs offers advice emphasizing the need for men to demonstrate and express their love, “There are men who think it spoils a woman to let her be sure of love and admiration. This is all poppycock! The average woman is encouraged to do and be her best if her husband sincerely loves her and tells her so. The man who adheres to this philosophy that it spoils a woman is apt to spoil his own chances for happiness.”
”Formula for Men Who Want to Live Happily.” The Milwaukee Journal, 9 Feb. 1943, p. 4.

Comic strips such as “Our Boarding House”, “Dixie Dugan”, “Mark Trail”, and “Apple Mary” (the earlier version of “Mary Worth”) filled many pages in the early editions of the Green Sheet. Later Green Sheets would include comics like “Bloom County”, “Dilbert!”, “Herman”, and “The Far Side”. 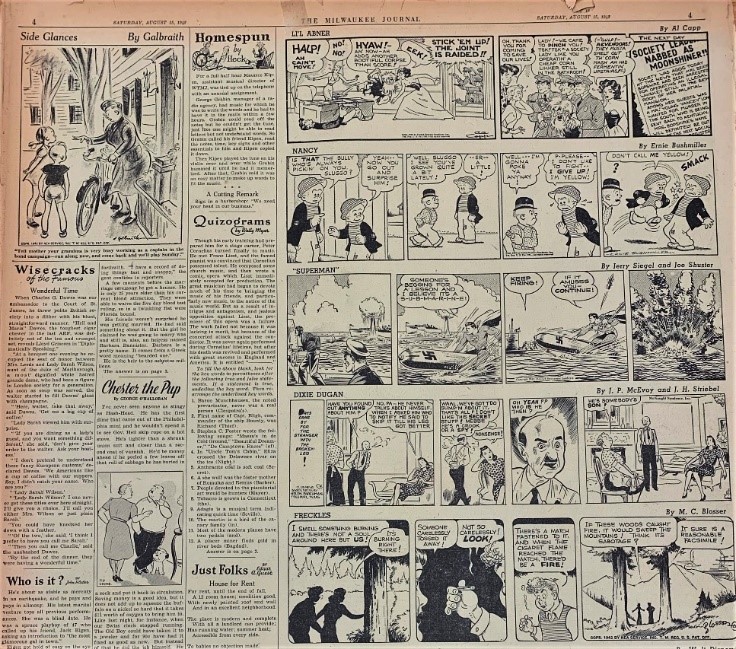 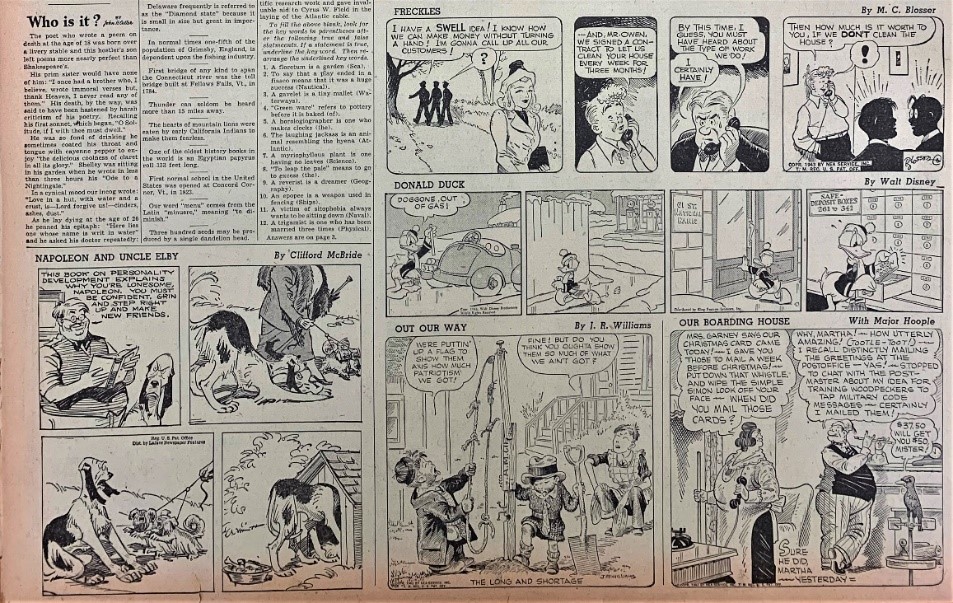 Published in the middle of World War II, cartoonist J. R. Williams depicts children’s patriotism in this “Out Our Way” comic. The Milwaukee Journal, 14 Jan. 1943, pp. 4.

Before television and even radio, the Green Sheet was a constant source of humor and distraction for Wisconsinites throughout the 20th century. Its presence was felt especially during the hardest moments in American history such as World War II, the Great Depression, and the Vietnam War. The light-hearted nature of the Green Sheet offered comfort to people looking for a relief from the serious and painful stories in the more traditional news coverage. 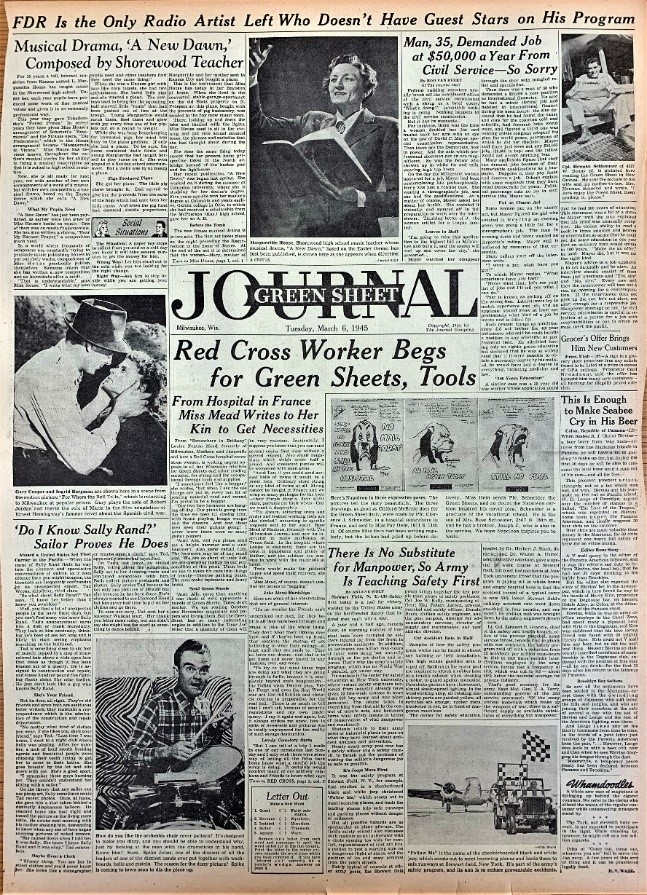 When the Journal merged with the Milwaukee Sentinel in 1994, the Green Sheet was discontinued citing the expense and difficulty acquiring green paper. It remained discontinued for 21 years until the Milwaukee Journal-Sentinel brought the section back in 2015 for new generations of Cheeseheads to enjoy and partake in this beloved part of Wisconsin history.

Link to the online version of the Green Sheet: https://www.jsonline.com/green-sheet/

Library record for the Milwaukee Journal in the San Francisco Academy of Comic Art Collection: https://library.ohio-state.edu/record=b5756480~S7

Workshop with Carol Tyler: The Healing Potential of Comics