Here at the Billy Ireland we are incredibly lucky to have student employees with a keen interest in comics history. Below, OSU senior Emily Glassmeyer, a History and Women’s, Gender and Sexuality Studies major who has worked at BICLM for almost a year, shares her personal research on the life of cartoonist Fanny Y. Cory.

Children and Fairies and Ranchers – Oh My!
The Life of Cartoonist and Illustrator Fanny Y. Cory

When not working at BICLM or frantically writing for my thesis, I treat myself to a stroll through the library. Having always felt most at home surrounded by books, leisurely perusing aisles is one of my favorite pastimes. Recently, upon getting into poetry, I stumbled upon this book: written by Abbie Farwell Brown and published in 1902, A Pocketful of Posies features a whimsical cover – a bunch of little blossoming flowers, but instead of colorful blooms, they are little fairies. Granted, I was excited about the poetry, but more than that, I was drawn into the illustrations – simple, yet ethereal, and upon further investigation, done by illustrator and cartoonist Fanny Y. Cory 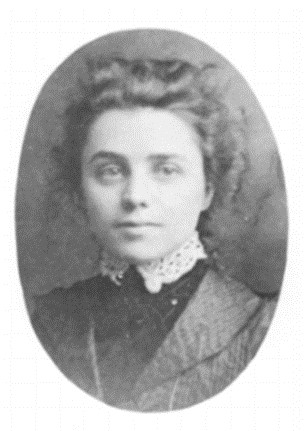 Born in 1877, Cory grew up in rural Illinois with her older sister and two older brothers. Her mother Jessie was a loving and amiable lady, who sadly fell ill to tuberculosis and passed on in 1887, leaving Fanny and her siblings with their father — an ill-tempered travelling salesman with a disdain for Cory’s passion for art – even though she occasionally used it to pay their rent.. Eventually the two older brothers invited Fanny and her sister Agnes out to live in New York, and soon enough, Fanny was accepted at the Metropolitan School of Art in 1896. At an astounding five feet tall, Cory began trying to sell her illustrations to major publications such as Harper’s while still a student. When told she needed to build a reputation first in order to get published, no matter how good her work was, the diminutive Cory was furious. However, by the turn of the century she had made the covers of several major publications such as Life, Scribner’s Century, Harper’s Bazaar, Liberty and The Saturday Evening Post, as well as illustrating for Alice in Wonderland and many of the works by the author of the Oz series, L. Frank Baum. Through her illustrations of playful fairies and mischievous children, she was quickly becoming one of the finest illustrators of her time. 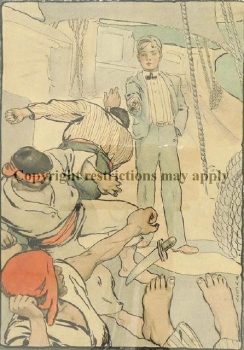 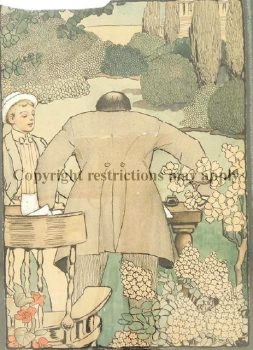 However, tragedy fell upon Fanny around this time. Her sister Agnes had contracted tuberculosis while caring for their mother ten years prior, and had been waning in health ever since. She died in her arms in 1897, leaving Fanny heartbroken and depressed for the next few years. Hoping that a change of scenery would do her good, her brothers Jack (a famous political cartoonist) and Bob invited her to Montana, where they planned to found the Cory Brothers Mine, hoping to strike gold. Although they weren’t necessarily successful miners, the next few years spent out in the wilderness riding on horseback and working on her art did Fanny a world of good – and led her to back to a rancher named Fred Cooney, who she had known in her youth but she “didn’t like him much then and he didn’t seem to know [she] existed.” They eloped in 1904 and began their life together. 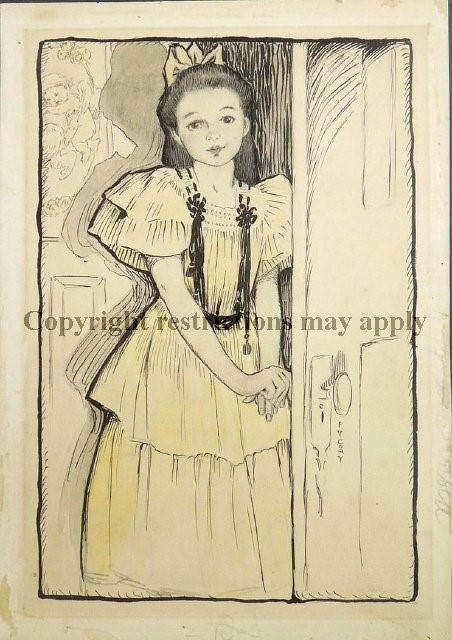 Although Fanny continued to work from home for the next few years, her art went on the backburner, happily devoting her life to raising her children. She initially wanted thirteen kids, but she was warned by the doctor that her body would likely not be able to handle childbirth. She tried adamantly nevertheless, frantically working during her first pregnancy to secure enough funds to support her family if something went south. Cory eventually had three children. She nearly sacrificed her acclaim in the art world in order to raise her family, but not begrudgingly. She loved taking care of her children, reading to them, working on the farm – axe and all, and gardening. Her children remember her as having “always [been] ready to undertake anything that needed doing, including some that were a bit large for her tiny size.” 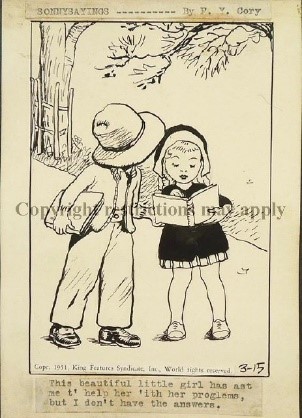 As her kids grew to be college-aged, Cory returned to her work – creating her first syndicated comic in 1926 called Sonnysayings and later Little Miss Muffet, a competitor for Little Orphan Annie. In large part, these two cartoons were used to pay for her children’s tuition, and provided her personal satisfaction. She kept Sonny going, that sparkling young boy, until her eyes began to fail her in 1956, and she decided that “thirty years was long enough to keep Sonny five years old.” She spent the rest of her life painting for herself and spending time with her children and grandchildren, and died at the age of 94 in her daughter’s home.

This under-studied and incredibly talented woman was one of the first female syndicated cartoonists, and her incredible drive can be shown in her prolific work—capturing and nationally showcasing the whimsy and joy of childhood for over thirty years. At the Billy Ireland Cartoon Library and Museum, we are lucky enough to have some of her work: such as original art from SonnySayings, Little Miss Muffet and some of her various illustrations for books. 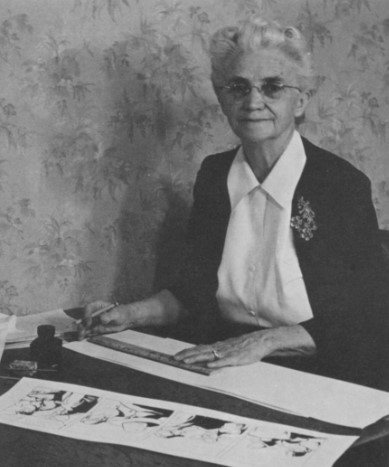 For original art work by her brother Jack Cory, check out the BICLM Art Database: https://osucartoons.pastperfectonline.com/vocabulary?keyword=Cory%2C+J.+Campbell%2C+1867-1925&letter=C&searchtype=creator&showsearch=true