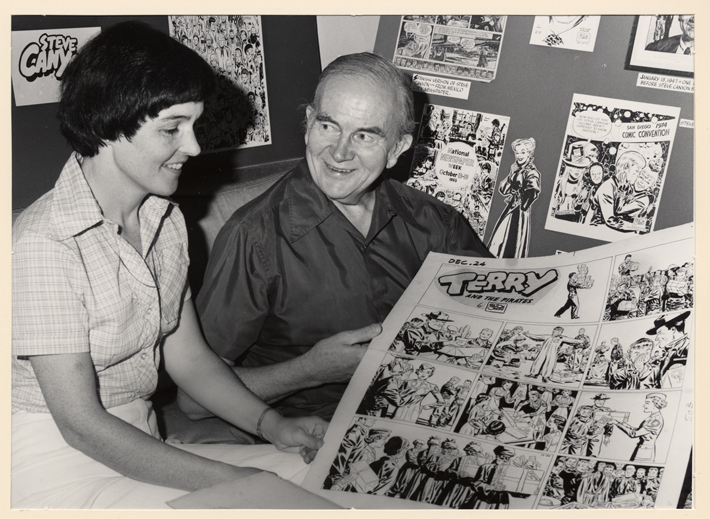 Founding Curator Lucy Shelton Caswell, with cartoonist Milton Caniff and an original page from his comic strip “Terry and the Pirates.” From the Milton Caniff Collection.

The Will and Ann Eisner Family Foundation has issued a challenge that would generate $70,000 for the Billy Ireland Cartoon Library & Museum (BICLM) and University Libraries. If the Libraries can raise $35,000, the Foundation will match that amount and establish an endowment that will generate funds for the Lucy Shelton Caswell Research Award.

The endowment will provide funding for scholars to travel to Columbus and use the BICLM collections for research and publishing. A committee will be appointed by the BICLM curator to review applications and select award recipients. The Foundation will also contribute a stipend for the award each year until the BICLM can raise the matching funds to establish the endowment.

“We are thrilled with this support for a new research award,” says BICLM curator Jenny Robb.

“Our vast collections include rare and unique items that in some cases must be viewed on-site,” Robb said. “Often scholars simply don’t have the funds to travel; this grant will provide significant assistance that will help us meet the growing demand for access to our resources.”

Will Eisner was a major cartoonist, writer and entrepreneur. He was one of the earliest cartoonists to work in the American comic book industry, and his series, The Spirit (1940–1952), was noted for its experiments in content and form. In 1978, he popularized the term “graphic novel” with the publication of his book A Contract With God. He was an early contributor to formal comics studies with his book Comics and Sequential Art (1985). The Eisner Family Foundation continues his support of the cartoon arts. The Will Eisner Seminar Room in the BICLM was named in honor of the late cartoonist.

The award will be named for the founding curator of the BICLM, Professor Emerita Lucy Shelton Caswell. Prior to her retirement, her scholarly work and teaching focused on the history of newspaper comic strips and the history of American editorial cartoons. She has curated more than seventy-five cartoon-related exhibits and is the author of several articles and books, the most recent being the revised edition of Billy Ireland. Caswell is co-editor of The Ohio State University Press Studies in Cartoons and Comics series. She also serves as the vice president of Cartoon Crossroads Columbus, the annual citywide celebration of cartoon art.

More information about the award, including how to apply, will be announced soon.

Click here to donate and learn more about our first-ever Day of Giving!