Found in the Collection: Frank Beaven

Here at the Cartoon Library, it’s always a bittersweet thrill to find another absurdly gifted yet unsung talent in the vaults. Today, Frank Beaven! Born in Vincennes, Indiana and a graduate of Wabash College in Crawfordsville, Frank lived from 1907-1975, and worked primarily in the 1930s-50s. 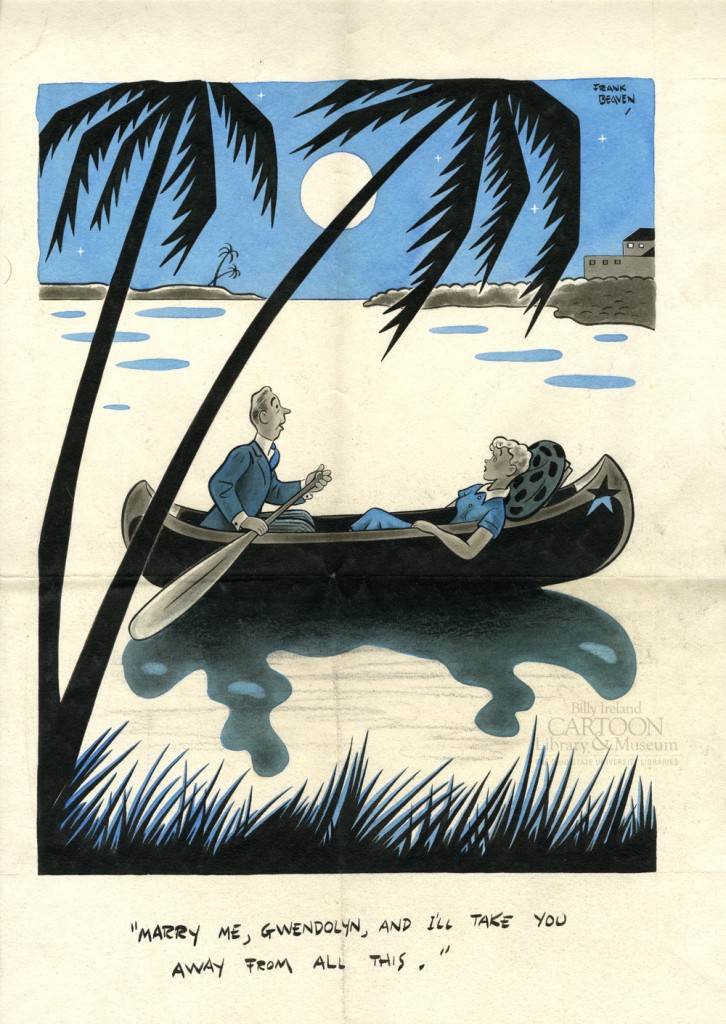 “Marry me, Gwendolyn, and I’ll take you away from all this” Frank Beaven original from the Ned White Collection, The Ohio State University Billy Ireland Cartoon Library & Museum (click to enlarge)

Although most people unfortunately do not recall him at all, Frank Beaven is remembered either as a cartoonist of saucy girlie drawings for Humorama magazines (which we will not be picturing here!) alongside the likes of Dan DeCarlo and Bill Ward, or as a more refined artist working for The New Yorker, Colliers, Esquire, and The Saturday Evening Post. Because of the two extremes in clientele, Beaven changed his signature often enough to drive a librarian insane. If it wasn’t his full name, it was “FB”, “REKOJ”, “RE”, “F.”, and so on. 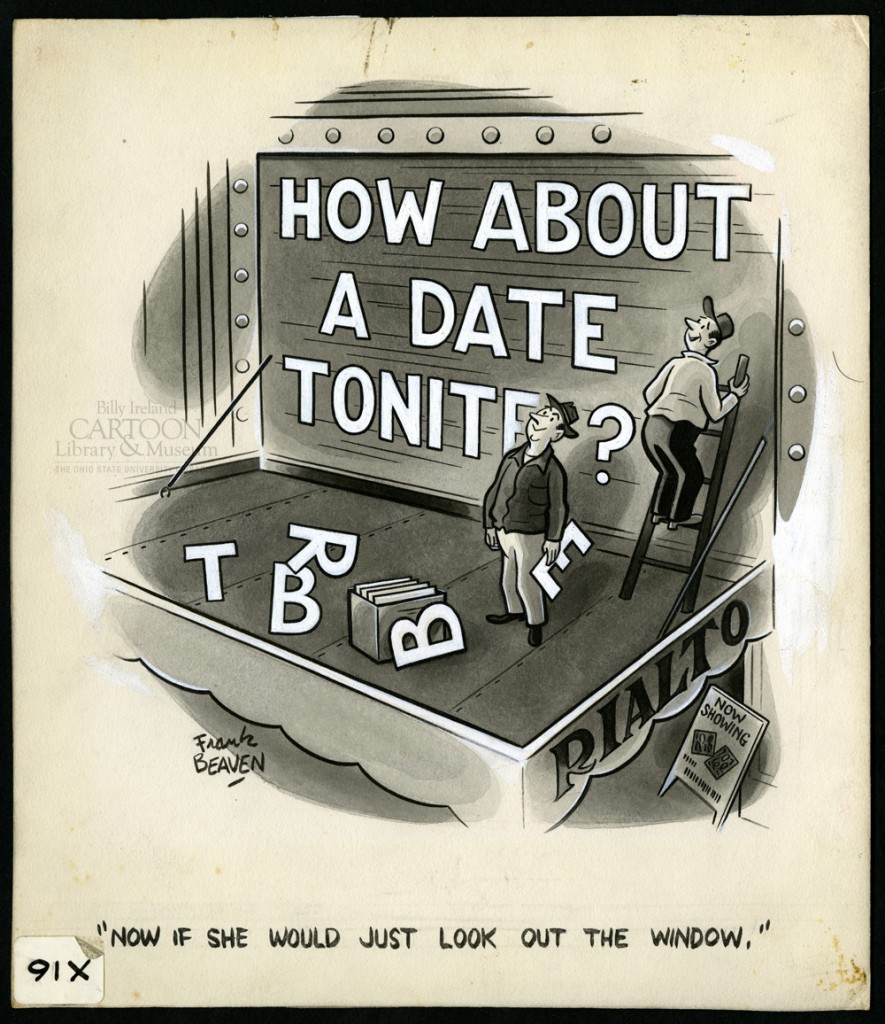 “Now if she would just look out the window.” Frank Beaven original, from the International Museum of Cartoon Art Collection, The Ohio State University Billy Ireland Cartoon Library & Museum (click to enlarge)

Frank was an occasional contributor to many publications, and a regular contributor to few. Beyond the high society and mens mags, his work could be seen in ads for Schlitz beer, Tabasco Sauce, Zippo Lighters and Eveready Batteries, as well as in Radio Craft Magazine, a hobbyist publication for those with an interest in home made radios. 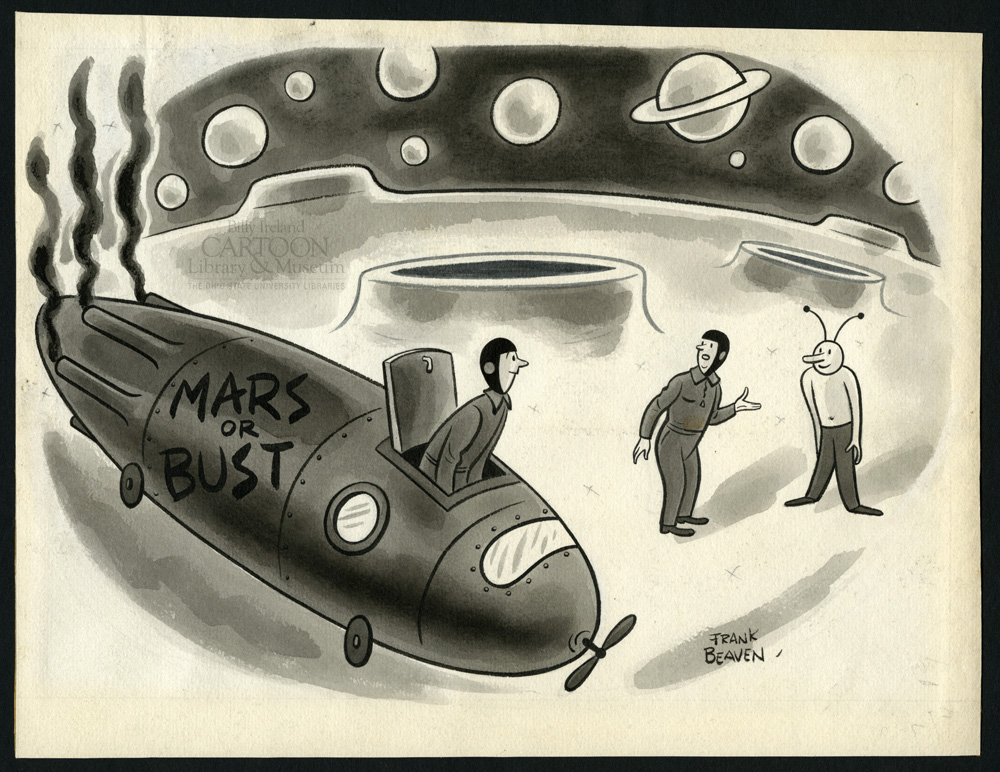 “He says he’s a stranger here himself!” Frank Beaven original, from the Charles H. Kuhn Collection, The Ohio State University Billy Ireland Cartoon Library & Museum (caption on back of piece)

From 1935 to 1937, Frank was in the funny pages of the Register and Tribune syndicates with his Bats in the Belfry multiple gag feature, for which he would occasionally pay a dollar to readers to write-in gags. For reasons unknown to us (but appreciated by us), nearly every installment contained a panel of ghost jokes. 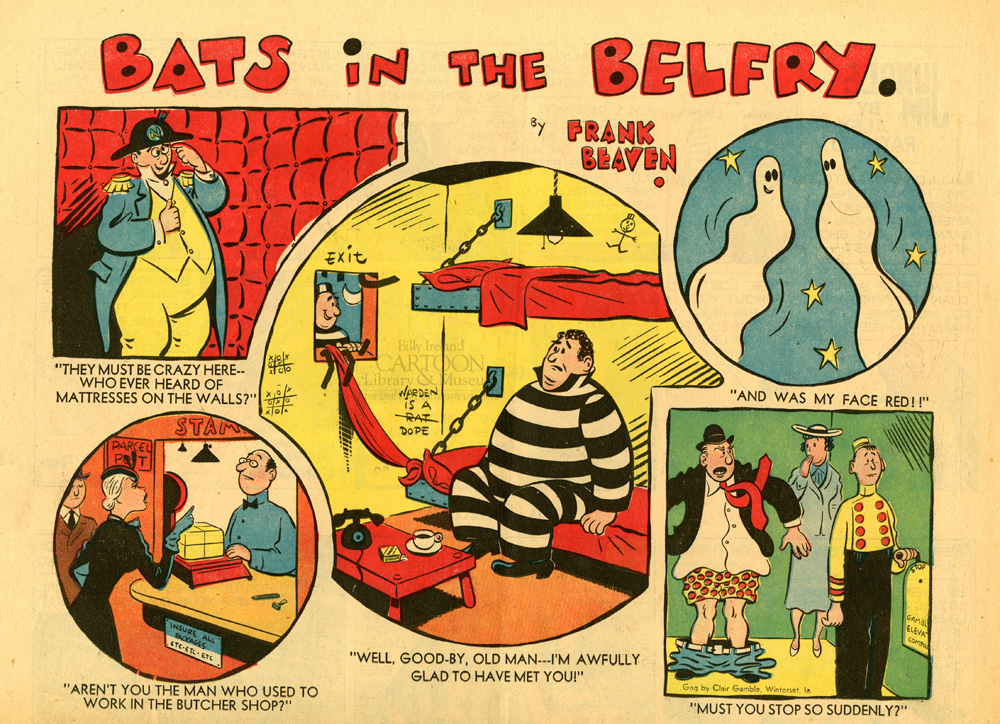 Frank and his wife Elise Rosenborg moved to Staten Island in 1932, and eventually to Allendale, NJ after the war where they remained until Frank passed away of Lou Gehrig’s Disease.

Do you have more information on Frank? Feel free to share!

Preservation and the Cartoon Library