Interview with Martin Lund, Researcher at the Cartoon Library February 7-22, 2012 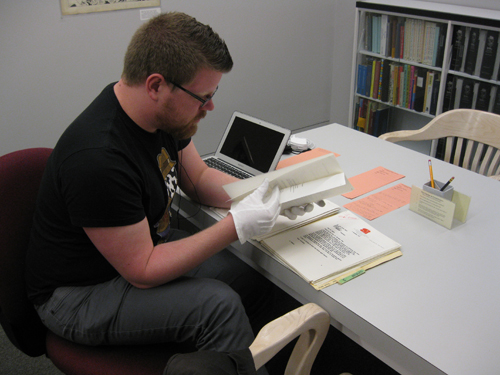 Martin Lund is a Ph.D. candidate in Jewish Studies at the Centre for Theology and Religious Studies at Lund University in Sweden.  He arrived at the Billy Ireland Cartoon Library & Museum on February 7th, 2012 with a two-week research request to view the collection of Will Eisner’s papers.  These 7 boxes contain Eisner’s personal and business correspondence, articles, and commercial publications.

Caitlin McGurk: Thanks for making time to talk with me! Can you tell me a bit about your Ph.D. thesis work, and what you’re hoping to gain from using the Eisner collection?

Martin Lund: The general subject of my thesis is “Jewish Cultural Memories in and of American Comics”. I’m looking specifically at Jerry Siegel and Joe Shuster’s original run on “Superman”, Will Eisner, and Chris Claremont’s “Uncanny X-Men”.

ML: I chose them for the fact that they worked in mainstream comics… comics that were created for and have reached a much broader audience. I didn’t want to write about more alternative creators like Art Spiegelman or Harvey Pekar whose works are created with more of an outspoken intention to reflect the Jewish experience. Instead, I was looking to find something less obvious. The three main focuses of my thesis are 1- How, if at all, is the fact that they (Siegel, Shuster, Eisner, and Claremont) were Jewish reflected in their work? 2- How is this fact argued in recent writings on Jews in comics? 3- How do similarities and discrepancies between these two issues reflect and effect contemporary American Jewish identity politics?

CM: I see, so you’re looking at other critical works that address this topic as well?

ML: Yes. In fact, a lot of my inspiration came from reading material on similar issues, but ones I felt were not as critical and contextualized as they could be. A lot of the work on Jews in comics that I will be studying is… I guess you can label it post-Michael Chabon’s fantastic novel “The Amazing Adventures of Kavalier and Clay”, because of the effect the book seems to have had on the discourse. I want to read both collections of material from a cultural history and sociology perspective, and through this hopefully further the understanding of how comics reflect and are said to reflect the American Jewish experience in the past century.

CM: This all sounds fascinating! So, have you found any especially interesting gems in the Eisner collection so far?

ML: Oh, I’d say just about all of it is fascinating – to me at least! There is a lot of old business correspondence in there between “Jerry” Iger, Eisner, and E.M. (“Busy”) Arnold from the studio days of working on “The Spirit”. The way that Arnold criticizes Eisner’s work is hilarious – very harsh and matter-of-fact. Another amazing thing to see is all of the fan mail and his correspondence with some of the greats. His exchange of letters with Harvey Kurtzman, recommendations from Art Spiegelman, and even a few lines from Brian Michael Bendis, a creator who is (I think very deservedly) famous in his own right today, thanking Eisner for the inspiration he provided. In his responses to many now-famous creators who sent him samples of their work, Eisner often gives them an artistic tip or two.

CM: Haha, excellent. I assume you’ve found what you’ve been looking for in the Eisner holdings – can you talk a bit about how you’re analyzing all of the material? What do you look for in particular to support your thesis?

ML: I look for keywords and topics in his personal writings – like anything pertaining to his views on life, or of course to Judaism or Jewishness in general. A lot of what I’ve found is along the lines of what Eisner said in other places, about not considering himself a particularly Jewish writer, but instead insisting that he just “wrote what he knew”. He appears like more of an observer – reporting the human experience through the lens that he knows, which, he writes, happens to be Jewish culture. He refers to himself as a Jewish Frank McCourt. He also mentions in one correspondence about “The Spirit” that only Jules Feiffer considered “The Spirit” to be Jewish, even underlining the word “only”.

CM: I’m really glad to hear it was fulfilling research! So, have you used comics in your religious studies research before, or do you plan to again? I think it’s a very unique discipline to apply comics to, so all of this has been fascinating to hear about.

ML: Comics and religion are what I want to study, for as long as I’m able to. I’ve actually been working on another piece during my stay in Columbus, totally unrelated to my thesis, about Jack Chick’s “Chick Tracts”. They are definitely a private obsession of mine. I’m looking at Chick’s use of stereotypes – the division of humanity into what he calls the saved and the lost – and how he uses these in his tracts for propaganda purposes.

CM: As a New Yorker, I’ve amassed quite a collection of Chick Tracts myself. High entertainment! Both of the projects you’re working on sound incredible – please keep us posted on when they are available. Thank you so much for taking the time to talk with me, and for coming all the way from Sweden to use our collection!