New Exhibits! Ollie Harrington and Comics and the Environment

Power Lines: Comics and the Environment
&
Dark Laughter Revisited:
The Life and Times of Ollie Harrington

Environmental awareness and the political cartoons of Oliver Harrington are the subjects of two unique exhibits opening in November at the Billy Ireland Cartoon Library & Museum. 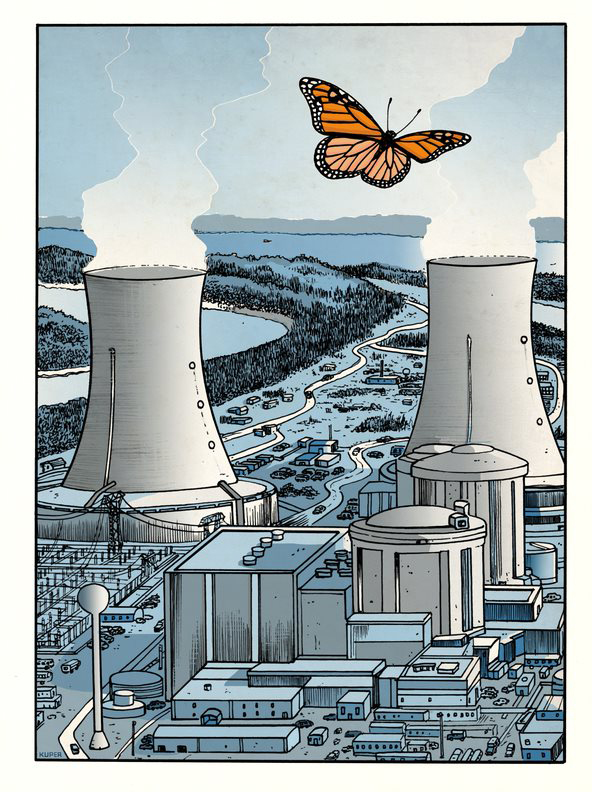 Art by Peter Kuper from his graphic novel Ruins published by SelfMadeHero, 2015. Used with permission.

Power Lines: Comics and the Environment: This exhibit surveys over 100 years of comics that depict both the pleasures and dangers of human interaction with the environment. We survive and thrive thanks to the earth’s many resources, but we can also cause our planet irreparable harm. From fears about pollution, to the celebration of parks and preserves, to anger at the failures of the Environmental Protection Agency, to recognition of the ways environmental destruction and global warming disproportionately affect people of color: comics have captured it all. Types of work included in this exhibit include political cartoons, underground comix, superhero comic books, newspaper comics, and more. Artists featured include Peter Kuper, Richard Thompson, Eleanor Davis, Bill Watterson, and more. Curated by Jared Gardner and Elizabeth Hewitt. 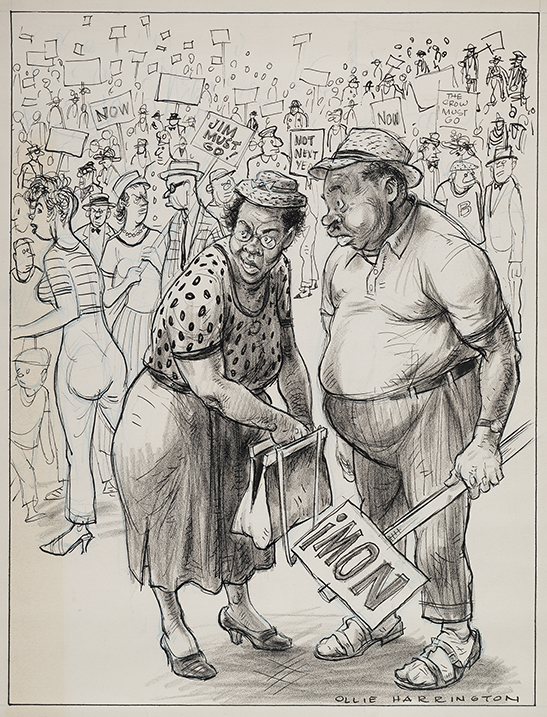 “Here Brother Bootsie, take this extra hammer I got here in case the gentlemens of the law decide that this demonstration is TOO peaceful!”
Ollie Harrington. Bootsie, June 29, 1963. Collection of Dr. and Mrs. Walter O. Evans. © Estate of Oliver W. Harrington

Dark Laughter Revisited: The Life and Times of Ollie Harrington: Throughout his career, Oliver “Ollie” Harrington used his voice and artistic talents as a cartoonist to attack racial, economic and social injustice with razor-sharp wit and insight. Speaking from the perspective of a cartoonist of color, his commentary chronicled many of the events and issues that defined the 20th century from racism and segregation, to war and poverty. Harrington’s life and career intersected with the Harlem Renaissance, World War II, the Civil Rights movement, the post-war Black émigré community in Paris and communist East Germany.

Starting in the 1930s, Harrington’s work was widely published in the Black Press including the Pittsburgh Courier, the Chicago Defender and the People’s Voice. His long-running series Dark Laughter (later known as Bootsie) cast a satirical, yet affectionate, gaze on Black America through the adventures of an observant African-American “everyman.” During World War II, Harrington served as a war correspondent and later worked briefly as the NAACP public relations director. He emigrated from the United States to Paris in 1952 and ultimately to Berlin in 1961 in response to concerns about FBI surveillance due to his outspoken criticism of the U.S. government. Later in his career, he also published trenchant editorial cartoons in the Communist U.S. newspaper Daily World and East German magazines such as the satirical weekly Eulenspiegel. Harrington was an unapologetic activist and critic of racism and capitalism whose powerful cartoons remain relevant and speak to problems that are still unresolved today.

This retrospective exhibition is curated by Dr. Kay Clopton and Jenny Robb and it features numerous original Harrington cartoons on loan from the private collection of Dr. and Mrs. Walter O. Evans. Walter and Linda Evans are active philanthropists and collectors of African American art and literature. The exhibit also includes artworks and archival materials from the Billy Ireland Cartoon Library & Museum’s Oliver Harrington Collection.

The award is open to non-OSU graduate students, faculty, and independent scholars (including scholars with or without advanced degrees or without institutional affiliations) who are at least 18 years old and live more than 60 miles from the Ohio State University’s main campus. Both foreign and domestic applicants are invited to apply.

Applications will be evaluated based on the originality and significance of the research topic, the potential of the project to contribute to new scholarship or creative works, the relevance of the collection materials to the project, and evidence of the need to use the materials on-site. We encourage applicants from all disciplines who are using cartoons or comics in their research projects. Our holdings of books, serials, original art, and archival collections can be searched at our website. 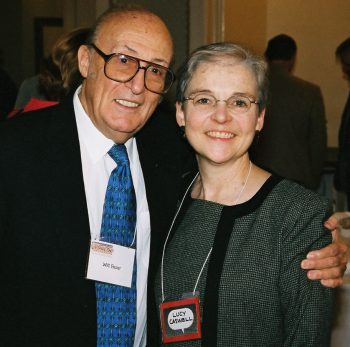 This award was made possible by a generous gift from the Will and Ann Eisner Family Foundation, which was matched by many additional donors to create the Lucy Shelton Caswell Research Award Endowment. Will Eisner was a major cartoonist, writer, educator and entrepreneur. He was one of the earliest cartoonists to work in the American comic book industry, and his series, The Spirit (1940–1952), was noted for its experiments in content and form. In 1978, he popularized the term “graphic novel” with the publication of his book A Contract With God. He was an early contributor to formal comics studies with his book Comics and Sequential Art (1985). The Eisner Family Foundation continues his support of the cartoon arts. The Will Eisner Seminar Room in the BICLM was named in honor of the late cartoonist.

The award is named for the founding curator of the BICLM, Professor Emerita Lucy Shelton Caswell. Prior to her retirement, her scholarly work and teaching focused on the history of newspaper comic strips and the history of American editorial cartoons. She has curated more than seventy-five cartoon-related exhibits and is the author of several articles and books, the most recent being the revised edition of Billy Ireland. Caswell is co-editor of The Ohio State University Press Studies in Cartoons and Comics series. She also serves as the vice president of Cartoon Crossroads Columbus, the annual citywide celebration of cartoon art.

To be considered, all applications must be received by November 8, 2021.

A committee appointed by the Curator will review the applications and select the award recipients.  Decisions will be announced on December 15, 2021. Queries about applications in process cannot be acknowledged.  Award recipients and their research projects will be recognized in Billy Ireland Cartoon Library & Museum and University Libraries’ publicity.

All communications regarding the award should be submitted to cartoons@osu.edu

Timing of the research visit will be mutually arranged, but must take place within the 12 months fiscal year following the successful notification of the award.

Recipient will meet with Curator to agree on final research product and date of completion during research visit.  Details of this agreement must to submitted prior to end of the research visit.

Recipient will share their work with the university community through an open presentation, blog post, or other appropriate means by June 30, 2023.

Recipient will provide a brief statement or report describing research visit and summarizing the results of their research by July 31, 2023. 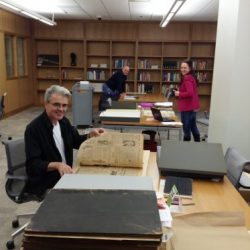 Researchers at the Billy Ireland Cartoon Library & Museum from Australia, Germany and Singapore