The performances of Lydia Thompson and her burlesque contemporaries came to be referred to as “tights plays” because of the titillating (for the time) costumes the women dared to wear onstage. Like other fashionable women of their era, the Blondes wore tightly-laced corsets intended to define their torsos and breasts. But rather than concealing their lower parts underneath layers of skirts and petticoats, they boldly displayed them by wearing form-fitting tights. Nearly every inch of skin on their bodies was covered, but because the shape of their legs was clearly discernible, this attire was considered highly erotic and therefore shocking.

Such public display of the female body was in direct conflict with the Victorian ideal of “True Womanhood,” which called for women to be delicate, modest, domestically-inclined, and ornamentally beautiful. Women who literally made a spectacle of themselves onstage as Thompson and others like her did were considered highly immodest, stepping deliberately out of the bounds socially prescribed for their sex. Many have since pointed out the irony of all this clamor over the issue of “loose women in tights” (Corio 14), especially given the increasingly revealing fashions of today, but at the time tights were intensely controversial.

Even more ironically, though, the wearing of tights, or even of full nude display, was deemed socially acceptable in another popular theatrical form: tableaux vivants, or “living pictures.” These performances involved beautiful women onstage in various states of elaborate costume and undress, posed to create an artistic tableau. The performers were not allowed to move until the curtain came down, at which time they would rearrange themselves into another aesthetically-pleasing stage picture. It was only in this context that a beautiful, unclothed woman onstage could be permitted. The moment she stopped standing still as a static piece of art to be contemplated, and started exercising physical mobility and vocal subjectivity in addition to her physical charms – as burlesque performers did – she became a serious threat to the social order. 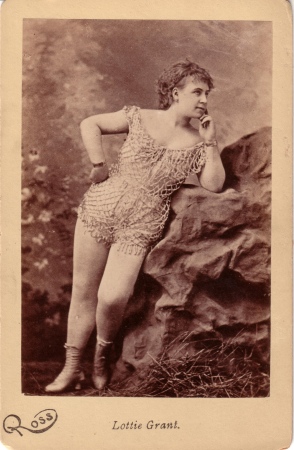