Another exotic addition to burlesque was the art of belly dancing, which entered the popular consciousness following the phenomenon of dancer Little Egypt.  Little Egypt’s sensuous “hootchy-cootchy” dancing was a featured attraction at the 1893 Chicago World’s Fair, and her style of performance was increasingly incorporated into burlesque following that event.

With their uncorseted bare stomachs and sweeping, gypsy-like skirts and veils, belly dancers and other Salome-esque figures were able to be culturally constructed as a hyperfeminine “low other” whose exotic sexuality could be safely consumed and enjoyed by the white, Western public.  The implied dangers of Salome and Little Egypt’s brand of sexual performance were therefore at least partially neutralized by the very exoticism which made them so appealing, as their considerable power was “contained and distanced” by their “exotic otherness” (Allen 228). 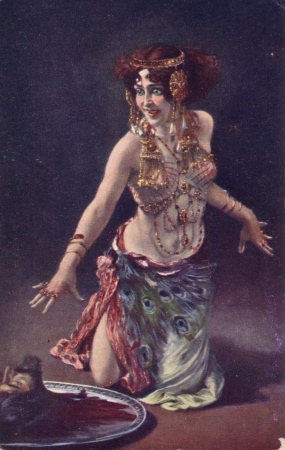