The Decline of Burlesque

Modern audiences, when they think of burlesque at all, tend to equate it with striptease, but the striptease was, in truth, a relatively late addition to the burlesque repertoire.  Early burlesque performers may have been scantily clad when they walked onstage, but they did not strip off their garments as part of their acts.  No one is quite sure how stripping onstage began; there have been many origin stories, and just as many different performers attempting to take credit for this landmark event.  But whether it began intentionally or accidentally, striptease had been popularized on burlesque stages by the 1920s.  As striptease became more popular, comics and other variety acts which had been part of burlesque since its early days were gradually cut back in favor of more marketable female flesh.

Burlesque stripteasers usually stripped down to a G-string and pasties, though some were inclined to go further.  Acts became progressively more risqué as public interest in burlesque began to wane, pushed aside first by vaudeville and Broadway revues, and later by the motion picture industry.  Burlesque tapered off in the 1920s, only to have a resurgence during the Great Depression, even moving to Broadway playhouses under the purview of the famous Minsky brothers.

Burlesque’s escalating focus on titillation rather than performance attracted an even stronger antiburlesque discourse, as well as legal measures.  Police raids on burlesque theatres suspected of showing too much flesh became commonplace.  One of the most famous raids, of a prominent Minsky theatre, occurred on April 20, 1925.  This raid has a place in history as what many consider to have been the beginning of the end for burlesque.  It has since been immortalized in a 1960 novel, written by Rowland Barber, and a 1968 film, both entitled The Night They Raided Minsky’s.

As the sexualized display of the female body increased, the performer herself lost her voice.  When she was permitted to appear in comedy sketches at all, she was relegated to the role of “talking woman,” reacting to the male comic rather than speaking for herself.  Morton Minsky himself admitted that “burlesque was becoming nothing more than a legal way of selling the illusion of sex to the public” (qtd. in Allen 232).

Burlesque continued on for years following the raid of Minsky’s, but antiburlesque legislators finally succeeded in outlawing it in New York City beginning in 1937.  The very next year, in his book Strip Tease: The Vanished Art of Burlesque, H.M. Alexander observed that “the heart is out of burlesque” but “it will be back” (118), and his prediction proved correct.  Burlesque has lived on throughout the twentieth century and into the twenty-first in several incarnations.  Today, there is a growing neo-burlesque scene, populated by performers who are determined to bring back the retro glamour of the strip and the tease, but with their own modern twist.  The burlesque of today bears little resemblance to the performances of Lydia Thompson, but it remains a significant means of sexual self-expression for women.

Burlesque finds its way into “polite” society on this 1913 postcard 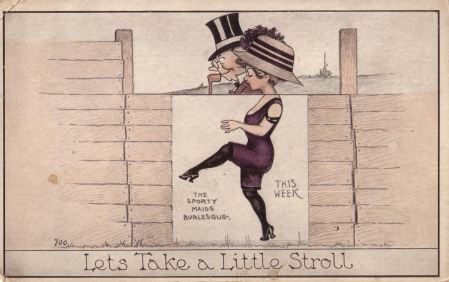